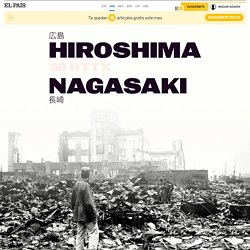 Planning, 1941–43 Hitler’s Reich, east and west. 8. Battle of Stalingrad. 7. Pearl Harbor attack. Prelude to war In the late 1930s, American foreign policy in the Pacific hinged on support for China, and aggression against China by Japan therefore necessarily would bring Japan into conflict with the United States. 6.Operation Barbarossa. On June 22, 1941, Adolf Hitler launched his armies eastward in a massive invasion of the Soviet Union: three great army groups with over three million German soldiers, 150 divisions, and three thousand tanks smashed across the frontier into Soviet territory. 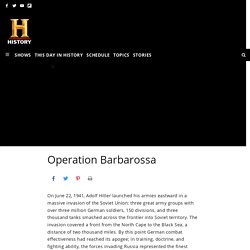 The invasion covered a front from the North Cape to the Black Sea, a distance of two thousand miles. By this point German combat effectiveness had reached its apogee; in training, doctrine, and fighting ability, the forces invading Russia represented the finest army to fight in the twentieth century. Barbarossa was the crucial turning point in World War II, for its failure forced Nazi Germany to fight a two-front war against a coalition possessing immensely superior resources. The Germans had serious deficiencies. They severely underestimated their opponent; their logistical preparations were grossly inadequate for the campaign; and German industrial preparations for a sustained war had yet to begin. La Batalla de Inglaterra. 5.Battle of Britain. In the summer and fall of 1940, German and British air forces clashed in the skies over the United Kingdom, locked in the largest sustained bombing campaign to that date. 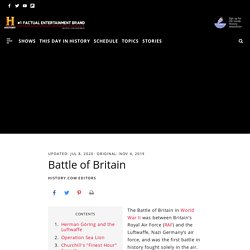 A significant turning point of World War II, the Battle of Britain ended when Germany’s Luftwaffe failed to gain air superiority over the Royal Air Force despite months of targeting Britain’s air bases, military posts and, ultimately, its civilian population. Britain’s decisive victory saved the country from a ground invasion and possible occupation by German forces while proving that air power alone could be used to win a major battle. On June 17, 1940, the defeated French signed an armistice and quit World War II.

Britain now stood alone against the power of Germany’s military forces, which had conquered most of Western Europe in less than two months. But Prime Minister Winston Churchill rallied his stubborn people and outmaneuvered those politicians who wanted to negotiate with Adolf Hitler. 4. Blitzkrieg. A German term for “lightning war,” blitzkrieg is a military tactic designed to create disorganization among enemy forces through the use of mobile forces and locally concentrated firepower. 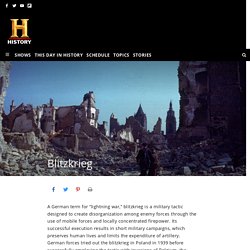 Its successful execution results in short military campaigns, which preserves human lives and limits the expenditure of artillery. 3. Appeasement. 2.German-Soviet Nonaggression Pact. On August 23, 1939–shortly before World War II (1939-45) broke out in Europe–enemies Nazi Germany and the Soviet Union surprised the world by signing the German-Soviet Nonaggression Pact, in which the two countries agreed to take no military action against each other for the next 10 years. 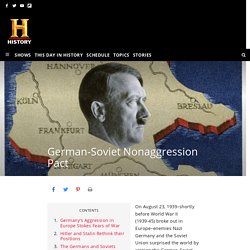 With Europe on the brink of another major war, Soviet leader Joseph Stalin (1879-1953) viewed the pact as a way to keep his nation on peaceful terms with Germany, while giving him time to build up the Soviet military. German chancellor Adolf Hitler (1889-1945) used the pact to make sure Germany was able to invade Poland unopposed. The pact also contained a secret agreement in which the Soviets and Germans agreed how they would later divide up Eastern Europe. 2. Anti-Comintern Pact. 1.The Rome-berlin Axis. Hitler finds an Ally in Benito Mussolini The Italian invasion and annexation of Abyssinia had strained relations between Italy and its allies Britain and France, and Benito Mussolini finally repudiated Italy's alliance with them. 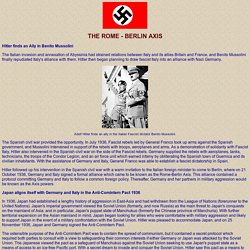 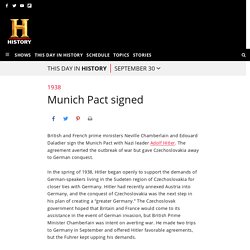