Future food: The market for algal oil is brimming with potential for future innovation, say experts. 10 Dec 2019 --- What is the future of food? 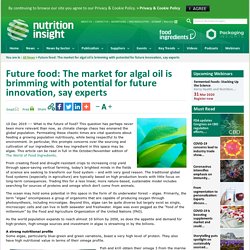 This question has perhaps never been more relevant than now, as climate change chaos has ensnared the global population. Permeating these chaotic times are vital questions about feeding a growing population nutritiously, while being respectful to the environment. In particular, this prompts concerns over the sourcing and cultivation of our ingredients. One key ingredient in this space may be algae. Regenerative agriculture: a shared ambition for the supply chain?

There’s excitement and hope stirring around regenerative agriculture with many organisations putting it into their strategies. 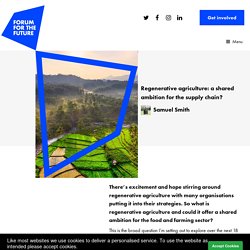 So what is regenerative agriculture and could it offer a shared ambition for the food and farming sector? This is the broad question I’m setting out to explore over the next 18 months in a Nuffield Farming Scholarship. I will visit farming systems and interview organisations across the supply chain that have regenerative agriculture ambitions. Over 40 percent of insect species face extinction: study. New research published Sunday suggests more than 40 percent of insect species "are threatened with extinction. 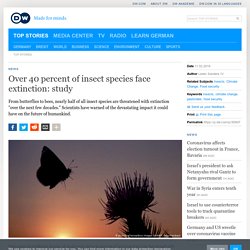 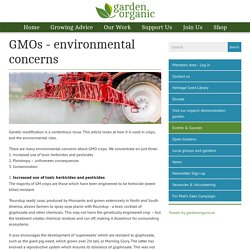 This article looks at how it is used in crops, and the environmental risks. See below for An introduction to GMOs, GMOs - health concerns, GMOs - political and ethical concerns, and GMOs - the future. What is Genetic Modification? A Genetically Modified Organism (GMO) is one whose genetic material (DNA) has been added to, removed or changed. Genetic engineering allows scientists to create desired traits or features into an organism – enhancing a crop’s resistance to weed-killer or drought, for instance.

This artificial manipulation of DNA would never happen in nature. There are many environmental concerns about GMO crops. 1. ‘Roundup ready’ soya, produced by Monsanto and grown extensively in North and South America, allows farmers to spray soya plants with Roundup - a toxic cocktail of glyphosate and other chemicals. United Kingdom to embark on ‘agricultural revolution’ in break from EU farm subsidies. After the United Kingdom leaves the European Union at the end of the month, it will sever ties with Europe’s farm subsidy policies—and to many researchers, that is a good thing. 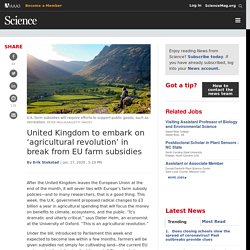 This week, the U.K. government proposed radical changes to £3 billion a year in agricultural spending that will focus the money on benefits to climate, ecosystems, and the public. “It’s dramatic and utterly critical,” says Dieter Helm, an economist at the University of Oxford. Ritchie 2019 Environ. Res. Lett. 14 114012.

State of the environment soil report. Climate change is driving UK agriculture north. Most of the arable, or crop growing, farming in the UK is in the east and south east of the region, with livestock pastures being more commonly located in the north and the west. 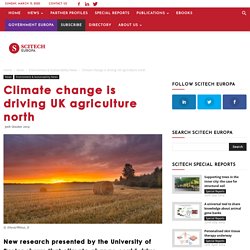 A new study led by the University of Exeter saw the effects of the 5-degree warming predicted by 2100. This prediction is based on the projected growth of the world’s carbon emissions. In addition to the rising temperature, Britain should expect a 140mm reduction in rainfall per growing season. The environmental consequences of climate-driven agricultural frontiers. Abstract Growing conditions for crops such as coffee and wine grapes are shifting to track climate change. 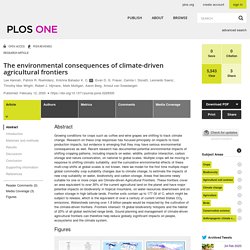 Research on these crop responses has focused principally on impacts to food production impacts, but evidence is emerging that they may have serious environmental consequences as well. Recent research has documented potential environmental impacts of shifting cropping patterns, including impacts on water, wildlife, pollinator interaction, carbon storage and nature conservation, on national to global scales. Multiple crops will be moving in response to shifting climatic suitability, and the cumulative environmental effects of these multi-crop shifts at global scales is not known. Here we model for the first time multiple major global commodity crop suitability changes due to climate change, to estimate the impacts of new crop suitability on water, biodiversity and carbon storage. Fixing the Future: Environmental Engineers and Climate Change. A climate crisis looms over our heads. 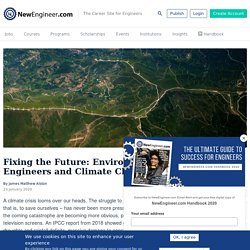 The struggle to save our planet – that is, to save ourselves – has never been more pressing. The realities of the coming catastrophe are becoming more obvious, projected daily on our television screens. An IPCC report from 2018 showed definitively that droughts and rainfall deficits, massive damage to ecosystems and biodiversity, and higher rates of disease and crop failures (all of which lead to increases in poverty and death, especially across the developing world, and all of which we’ve seen already), will become even worse in the near-future if we don’t do something about the climate change problem now.

And people are starting to get worried too, even if they aren’t prepared to give up their hard-earned cash to alleviate the problem. Food & Agriculture Archive.