Emerging - economic, business, technological and social - innovations in the Green economy of the Future

Increasing pressure on the stock of natural resources with associated volatility of prices and concerns about reliable access have fostered a growing discussion on ways for a transition to a low-carbon circular economy.

In response, the European Commission has developed a number of strategies and targets and will now continue this work in the context of the European Green Deal.

Even the transition to a circular economy already requires significant changes in the predominant take-make-consume-dispose model. But beyond that, there is discussion in academia, civil society and the political spheres as to whether these concepts and commitments are sufficient to keep us within planetary boundaries. Going beyond a circular economy to a regenerative or ecologically positive economy to further enhance the retention of value of resources in the economy suggests even more dramatic changes to the current approach while at the same time modifying the profile of environmental pressures (e.g. air, water or soil pollution) in the various phases of the life cycle of resources.

This could lead to alternative organisational and entrepreneurial structures aimed at maintaining and obtaining higher value from resource use, and providing societal benefits.

These could be informal or community businesses, or take legal forms such as co-operatives, mutual, associations or foundations. They could mobilise social capital, empower users and consumers, provide access to goods and services, and create jobs. As the importance and prevalence of alternative economic and business models and structures increases, what might be the long-term environmental and social risks and opportunities? Collaborative Consumption. Here’s What Could Go Wrong with the Circular Economy—and How to Keep it on Track. The circular economy—one that breaks the link between economic growth and use of limited resources and also cuts waste from the system—is on the minds of corporate sustainability professionals, governments and researchers. 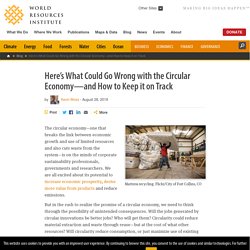 We are all excited about its potential to increase economic prosperity, derive more value from products and reduce emissions. But in the rush to realize the promise of a circular economy, we need to think through the possibility of unintended consequences. Will the jobs generated by circular innovations be better jobs? Who will get them? Circularity could reduce material extraction and waste through reuse—but at the cost of what other resources? The circular economy is not a silver bullet for employment, sustainability and prosperity. 1. Bicycle repair man in Lisbon, Portugal. Circularity could fundamentally change the employment landscape, similar to the disruption technology has brought. However, these employment changes come at a cost. 2. 3. 1. 2. 3. Here’s What Could Go Wrong with the Circular Economy—and How to Keep it on Track. Wcef2019summaryfinalfixed. 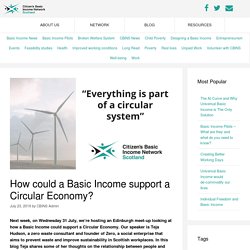 Our speaker is Teja Hudson, a zero waste consultant and founder of Zero, a social enterprise that aims to prevent waste and improve sustainability in Scottish workplaces. In this blog Teja shares some of her thoughts on the relationship between people and planet, social change and how the Circular Economy fits into the wider climate change conversation. Timothea Armour, Citizen’s Basic Income Network Scotland Editor Ahead of next week’s discussion, I asked Teja some questions to find out a bit more about how what she does fits in with what we do, and how creativity is important to all of it! Timothea: At its broadest reach, this event will be exploring the relationship between the way both humans and the planet are being failed by the current system. But it’s not a done deal yet. These people represent a vast untapped well of potential for social change. The circular economy in cities. Cities play a central role as engines of the global economy. 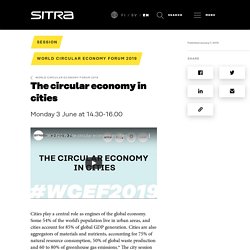 Some 54% of the world’s population live in urban areas, and cities account for 85% of global GDP generation. Global forum demands circular economy upscaling - PKN Packaging News. Held in Helsinki, the Forum was in its third annual outing. 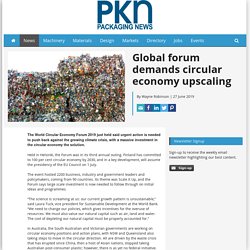 Finland has committed to 100 per cent circular economy by 2030, and in a key development, will assume the presidency of the EU Council on 1 July. The event hosted 2200 business, industry and government leaders and policymakers, coming from 90 countries. Its theme was Scale it Up, and the Forum says large scale investment is now needed to follow through on initial ideas and programmes. “The science is screaming at us: our current growth pattern is unsustainable,” said Laura Tuck, vice president for Sustainable Development at the World Bank. “We need to change our policies, which gives incentives for the overuse of resources.