Geert Vanden Bossche Stokes Fear of COVID-19 Vaccine To Promote His Own Flawed ‘Solution’ On March 6, 2021, a Belgian veterinarian named Geert Vanden Bossche published an open letter “to all authorities, scientists and experts around the world” asserting that, in his expert analysis, the current global COVID-19 vaccination program will “wipe out large parts of our human population.” 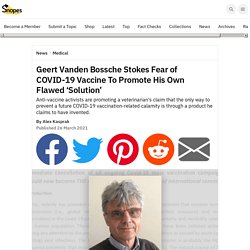 Rational Ground – Clear Reasoning on National Policy for COVID-19. Did Scientists Conclude Asymptomatic COVID Patients Can't Spread Virus? As governments fight the COVID-19 pandemic, Snopes is fighting an “infodemic” of rumors and misinformation, and you can help. 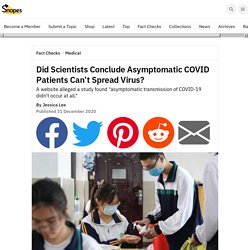 Read our coronavirus fact checks. Submit any questionable rumors and “advice” you encounter. Become a Founding Member to help us hire more fact-checkers. US Election 2020: The 'dead voters' in Michigan who are still alive. COVIDeniers: Anti-Science Coronavirus Denial Overlaps with Climate Denial. The climate science denial machine created by the fossil fuel industry is now a major source of COVID-19 disinformation. 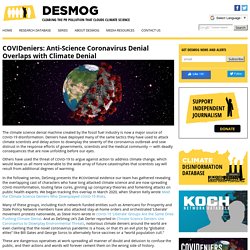 Deniers have deployed many of the same tactics they have used to attack climate scientists and delay action to downplay the severity of the coronavirus outbreak and sow distrust in the response efforts of governments, scientists and the medical community — with deadly consequences that are now unfolding before our eyes. Others have used the threat of COVID-19 to argue against action to address climate change, which would leave us all more vulnerable to the wide array of future catastrophes that scientists say will result from additional degrees of warming.

In the following series, DeSmog presents the #COVIDenial evidence our team has gathered revealing the overlapping cast of characters who have long attacked climate science and are now spreading COVID misinformation, touting false cures, ginning up conspiracy theories and fomenting attacks on public health experts. Science Feedback – A Scientific Reference to Reliable Information Online. Principia Scientific International. Background Principia Scientific International (PSI) is an organisation based in the United Kingdom which promotes fringe views and material to claim that carbon dioxide is not a greenhouse gas. 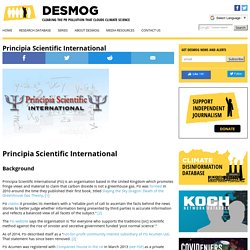 PSI was formed in 2010 around the time they published their first book, titled Slaying the Sky Dragon: Death of the Greenhouse Gas Theory. [1] PSI claims it provides its members with a “reliable port of call to ascertain the facts behind the news stories to better judge whether information being presented by third parties is accurate information and reflects a balanced view of all facets of the subject.” [2] The PSI website says the organisation is “for everyone who supports the traditions [sic] scientific method against the rise of sinister and secretive government funded 'post normal science'.” As of 2014, PSI described itself as a “not-for-profit community interest subsidiary of PSI Acumen Ltd.

Stance on Climate Change. Principia Scientific International (PSI) Sources in the Conspiracy-Pseudoscience category may publish unverifiable information that is not always supported by evidence. 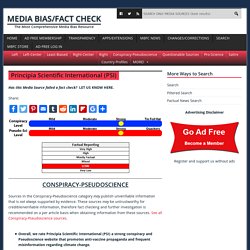 These sources may be untrustworthy for credible/verifiable information, therefore fact checking and further investigation is recommended on a per article basis when obtaining information from these sources. See all Conspiracy-Pseudoscience sources. Overall, we rate Principia Scientific International (PSI) a strong conspiracy and Pseudoscience website that promotes anti-vaccine propaganda and frequent misinformation regarding climate change.

Detailed Report Factual Reporting: LOWCountry: United KingdomWorld Press Freedom Rank: UK 35/180 History Founded in 2010, Principia Scientific International (PSI) is an organization based in the United Kingdom which promotes fringe views and material to claim that carbon dioxide is not a greenhouse gas. In November 2019, the PSI Facebook page was banned: Facebook Bans Principia Scientific International Without Explanation. Herd Immunity Is Not a Strategy. Read: A new understanding of herd immunity We may hear even more talk of herd immunity as the election nears, since Trump has an incentive to claim that the pandemic is almost over even if it’s not. 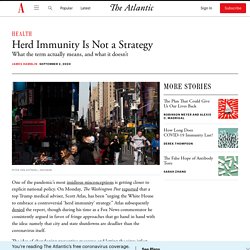 So now is a good time to revisit exactly what herd immunity means and, perhaps more important, what it doesn’t. I talked with Howard Forman, a health-policy professor at Yale University who has followed the data on how “herd-immunity strategies” have gone in various countries. Fake People and Sites. America's Frontline Doctors Summit – Restoring Peace and Protecting From Harm. CDC has not reduced the death count related to COVID-19. The U.S. 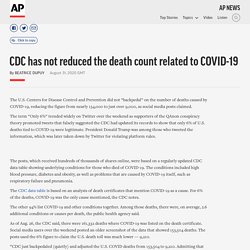 Centers for Disease Control and Prevention did not “backpedal” on the number of deaths caused by COVID-19, reducing the figure from nearly 154,000 to just over 9,000, as social media posts claimed. The term “Only 6%” trended widely on Twitter over the weekend as supporters of the QAnon conspiracy theory promoted tweets that falsely suggested the CDC had updated its records to show that only 6% of U.S. deaths tied to COVID-19 were legitimate. President Donald Trump was among those who tweeted the information, which was later taken down by Twitter for violating platform rules. The posts, which received hundreds of thousands of shares online, were based on a regularly updated CDC data table showing underlying conditions for those who died of COVID-19.

The conditions included high blood pressure, diabetes and obesity, as well as problems that are caused by COVID-19 itself, such as respiratory failure and pneumonia. No, the CDC did not ‘quietly adjust’ US coronavirus deaths. Over the weekend, President Donald Trump shared two posts that falsely claimed COVID-19 deaths are not as high as previously thought. 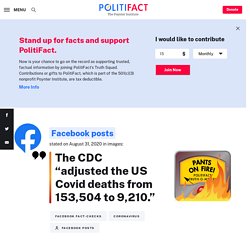 The posts claimed that the Centers for Disease Control and Prevention updated its COVID-19 death numbers to show that only 9,210 Americans have died from the virus. Twitter removed the first tweet for violating its rules. Another post from Jenna Ellis, a senior legal adviser for the Trump campaign, linked to a story from the Gateway Pundit, a conservative news site. Vaccine pseudoscience from Blaxill and Becker – flunking epidemiology. Here we go, more vaccine pseudoscience from the Age of Autism as if that surprises anyone. 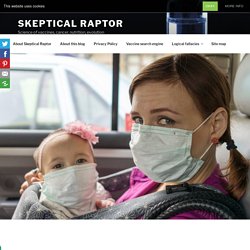 They seem to have flunked courses in statistics, epidemiology, public health, and just about any science related to vaccines. I’m probably giving them too much credit for actually signing up for such complicated courses. He Was a Science Star. Then He Promoted a Questionable Cure for Covid-19. When diagnosing the ills afflicting modern science, an entertainment that, along with the disparagement of his critics and fellow researchers, he counts among his great delights, the eminent French microbiologist Didier Raoult will lightly stroke his beard, lean back in his seat and, with a thin but unmistakable smile, declare the poor patient to be stricken with pride. 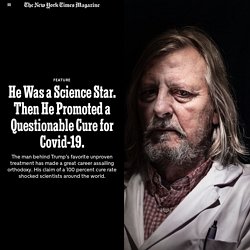