Honouring Aboriginal ANZAC soldiers - ABC online education. Australian Institute of Aboriginal and Torres Strait Islander Studies. That is not an easy question to answer of course, as we today are not in the same situation. 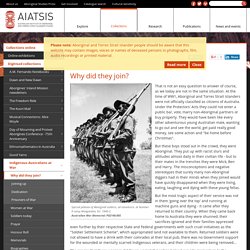 At the time of WW1, Aboriginal and Torres Strait Islanders were not officially classified as citizens of Australia. Under the Protectors' Acts they could not enter a public bar, vote, marry non-Aboriginal partners or buy property. They would have been like every other adventurous young Australian male, wanting to go out and see the world, get paid really good money, see some action and "be home before Christmas".

But these boys stood out in the crowd, they were Aboriginal. They put up with racist slurs and attitudes almost daily in their civilian life - but to their mates in the trenches they were Mick, Ben and Harry. Babana Aboriginal. Anzac Day Coloured Digger march - Creative Spirits. What does ANZAC stand for? 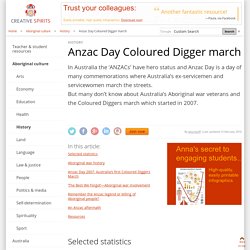 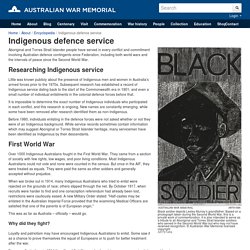 Researching Indigenous service Little was known publicly about the presence of Indigenous men and women in Australia’s armed forces prior to the 1970s. It is impossible to determine the exact number of Indigenous individuals who participated in each conflict, and this research is ongoing. Military service and Aboriginal voices - Barani. Participants in the City of Sydney’s oral history project to honour Aboriginal and Torres Strait Islander men and women who served their country, with Lord Mayor Clover Moore (Image courtesy Barbara McGrady / City of Sydney) The City of Sydney’s history team started recording oral histories with Aboriginal and Torres Strait Islander service people in 2008. 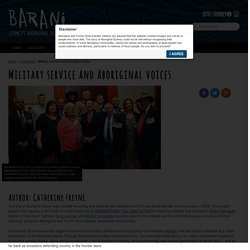 The project gained new impetus in 2013 with the commissioning of YININMADYEMI Thou Didst Let Fall the memorial artwork now installed in Hyde Park south. As part of the City of Sydney’s Eora Journey and ANZAC centenary commemorations, the artwork and the oral history project share a common objective: to honour Aboriginal and Torres Strait Islander servicemen and women. Comprising 16 interviews with diggers and their descendants published on the Sydney Oral Histories website, the oral history collection is a major contribution to the historical record. 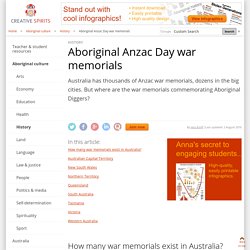 Aboriginal war memorials are invisible. Finding them is a little bit like a treasure hunt. Drawing: Chris Johnston, Eureka Street There is no centralised register of war memorials for Australia, but historian Ken Inglis and his research assistant Jan Brazier estimated in 1997 that there were 4,000 - 5,000 memorials in Australia [11], a figure that is likely to be much higher today. In 2014 the Register of War Memorials in NSW counted 2,334 memorials, the Queensland War Memorial Register listed 1,393 entries [15]. 50 Aboriginal soldiers fought on Gallipoli. Perhaps 50 Aboriginal soldiers fought on Gallipoli in an era when they weren't recognised as Australian citizens and enlistment was technically forbidden. 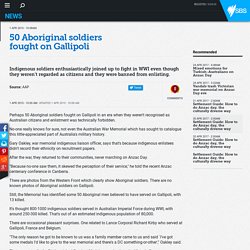 No-one really knows for sure, not even the Australian War Memorial which has sought to catalogue this little-appreciated part of Australia's military history. Gary Oakley, war memorial indigenous liaison officer, says that's because indigenous enlistees didn't record their ethnicity on recruitment papers. After the war, they returned to their communities, never marching on Anzac Day.

"Because no-one saw them, it skewed the perception of their service," he told the recent Anzac centenary conference in Canberra. There are photos from the Western Front which clearly show Aboriginal soldiers. Still, the Memorial has identified some 50 Aboriginal men believed to have served on Gallipoli, with 13 killed. It's thought 800-1000 indigenous soldiers served in Australian Imperial Force during WWI, with around 250-300 killed. 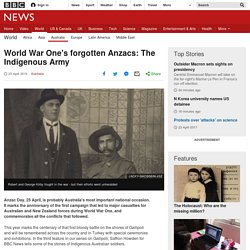 It marks the anniversary of the first campaign that led to major casualties for Australian and New Zealand forces during World War One, and commemorates all the conflicts that followed. This year marks the centenary of that first bloody battle on the shores of Gallipoli and will be remembered across the country and in Turkey with special ceremonies and exhibitions. In the third feature in our series on Gallipoli, Saffron Howden for BBC News tells some of the stories of Indigenous Australian soldiers. For nearly a century, a tin trunk in a bedroom in remote country New South Wales (NSW) held the official documents and medal testifying to Richard Norman Kirby's exceptional wartime feats.

He was then hospitalised for diarrhoea and typhoid before rejoining his battalion in France in mid-1916. 'Not supposed to serve' Image copyright AFP.