Crop rotation Facts for Kids. Biodiversity Course. Human Activities That Threaten Biodiversity. Balancing Costa Rica's Farming With Preservation with Nature. Use one of the services below to sign in to PBS: You've just tried to add this video to your Watchlist so you can watch it later. 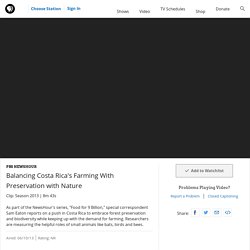 But first, we need you to sign in to PBS using one of the services below. #1 Update on the world's 15 largest seed banks. There are roughly 100,000 global plant varieties endangered in the world. 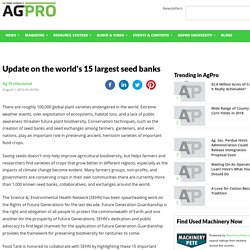 #2 What is Agricultural Biodiversity? Agricultural biodiversity is a broad term that includes all components of biological diversity of relevance to food and agriculture, and all components of biological diversity that constitute the agricultural ecosystems, also named agro-ecosystems: the variety and variability of animals, plants and micro-organisms, at the genetic, species and ecosystem levels, which are necessary to sustain key functions of the agro-ecosystem, its structure and processes (COP decision V/5, appendix). 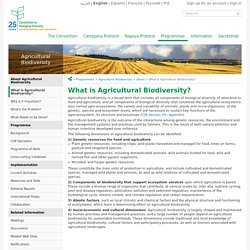 Agricultural biodiversity is the outcome of the interactions among genetic resources, the environment and the management systems and practices used by farmers. This is the result of both natural selection and human inventive developed over millennia. #3 How Seed Banks Work. Plants are crucial for the welfare of human society. 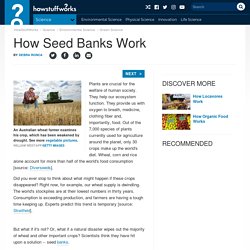 They help our ecosystem function. They provide us with oxygen to breath, medicine, clothing fiber and, importantly, food. Out of the 7,000 species of plants currently used for agriculture around the planet, only 30 crops make up the world's diet. Wheat, corn and rice alone account for more than half of the world's food consumption [source: Diverseeds]. Did you ever stop to think about what might happen if these crops disappeared? But what if it's not? Think of a seed bank as a savings account. The key to life: Bhavani Prakash at TEDxSingaporeWomen 2012. #5 Monoculture Crops - Learn About The Effects Of Monocropping. By: Susan Patterson, Master Gardener You’ve likely heard the term monoculture at one time or other. 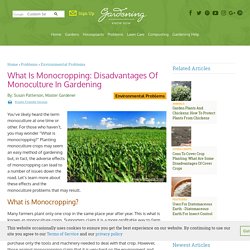 For those who haven’t, you may wonder “What is monocropping?” #6 Digging Deep: How to Feed the World With Perennial Food Crops. More than 9 billion people will live on Earth by 2050. 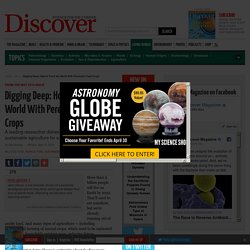 They’ll need to eat somehow, but we’re already running out of arable land. And many types of agriculture — including conventional farming of annual crops, which need to be replanted each year — leave fields nutrient-poor, reducing future productivity. But soil scientist Jerry Glover is optimistic about feeding more people while conserving farmland soil. The solution, he believes, is to focus less on annual crops, which dominate world agriculture, and to embrace instead the potential of perennials, crops that can be harvested more than once without replanting.

Glover, a senior sustainable agricultural systems research adviser at the U.S. #7 Yes, We May Have No Bananas, But Monoculture Wasn't So Easy To Avoid. #8 Ecological Theories, Meta-Analysis, and the Benefits of Monocultures. How do we go about increasing agricultural crop yields? 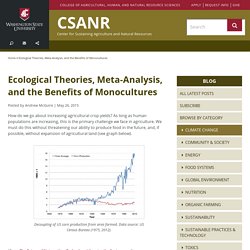 As long as human populations are increasing, this is the primary challenge we face in agriculture. We must do this without threatening our ability to produce food in the future, and, if possible, without expansion of agricultural land (see graph below). (From The Return of Nature; How Technology Liberates the Environment). One idea promoted by ecologists, agroecologists, and some organic farming proponents is to use polycultures instead of monocultures. Although polycultures have their place in some systems, I believe that monocultures are better suited for annual cereal crop agriculture, the source of a majority of our food energy.

What is a monoculture? A monoculture is a field planted to one species – there is no time variable. The ecological theory behind polycultures is that increased biodiversity will increase productivity when compared to monocultures; the biodiversity-productivity relationship. #9 Advantages and Disadvantages of Monoculture Farming. That global food prices will become a lot more volatile in the future, it is high time we challenged ourselves on whether our farming practices actually help address any of the underlying causes for this volatility such as water scarcity, land degradation and climate change [1]. 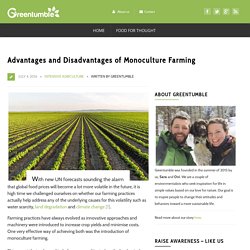 Farming practices have always evolved as innovative approaches and machinery were introduced to increase crop yields and minimise costs. One very effective way of achieving both was the introduction of monoculture farming. This meant that only one kind of crop was cultivated on the land as is done in wheat fields, apple orchards and grape vineyards. However, experts are now indicating that despite benefits, this practice might be having counterproductive effects in terms of the fight against climate change and land degradation. #10 Monocrops: They’re a problem, but farmers aren’t the ones who can solve it. #11 The mixed-up world of hybrid animals. Deep in the Amazon rainforest live two green birds. 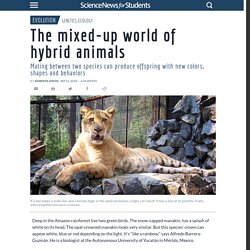 The snow-capped manakin, has a splash of white on its head. The opal-crowned manakin looks very similar. But this species’ crown can appear white, blue or red depending on the light. It’s “like a rainbow,” says Alfredo Barrera-Guzmán.