Bittersweet: On Maharashtra’s Women With No Wombs. Bittersweet is a strange title for a film, but filmmaker Ananth Mahadevan has combined the two words to mean something that reaches beyond its literal meaning. 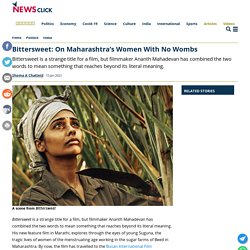 His new feature film in Marathi, explores through the eyes of young Suguna, the tragic lives of women of the menstruating age working in the sugar farms of Beed in Maharashtra. By now, the film has travelled to the Busan International Film Festival and also at the 26th Kolkata International Film Festival. Adele has sung its praises. But the Sirtfood diet may be just another fad - ABC News. The Sirtfood diet has been in the news again this week after singer Adele showed off her slimmed-down figure on US comedy show Saturday Night Live. 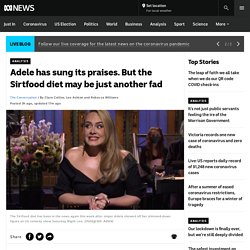 Adele has previously credited her significant weight loss to the Sirtfood diet.

Recipes. Vegies and Salad. Infographics - Food. Edible plants. Dimensions of need - Staple foods: What do people eat? The sources of food Click here to see the map A staple food is one that is eaten regularly and in such quantities as to constitute the dominant part of the diet and supply a major proportion of energy and nutrient needs. 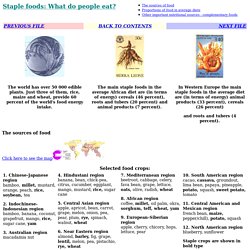 A staple food does not meet a population's total nutritional needs: a variety of foods is required. This is particularly the case for children and other nutritionally vulnerable groups. Typically, staple foods are well adapted to the growth conditions in their source areas. Most people live on a diet based on one or more of the following staples: rice, wheat, maize (corn), millet, sorghum, roots and tubers (potatoes, cassava, yams and taro), and animal products such as meat, milk, eggs, cheese and fish. Of more than 50 000 edible plant species in the world, only a few hundred contribute significantly to food supplies. Mainstreaming agrobiodiversity in sustainable food systems: Scientific foundations for an agrobiodiversity index. Sprawling threat to future Melbourne food supply. EXCLUSIVE: THE farmland on Melbourne’s fringes will be able to produce just 18 per cent of the city’s food demands by 2050. 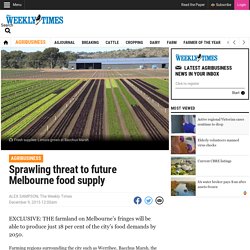 Farming regions surrounding the city such as Werribee, Bacchus Marsh, the Mornington Peninsula and the Cardinia and Casey shires in Melbourne’s southeast currently produce 41 per cent of all fresh fruit and vegetables for Melbourne, but are rapidly shrinking due to pressure from encroaching housing and other urban infrastructure. Narre Warren market gardener Mario Meneghetti, who grows vegetables on 10ha, said his farm was surrounded by housing development. A Comprehensive Guide to Testing pH of Food and Drink. Download the Free eBook All of the information contained on this page is available in a free, easy-to-use interactive PDF eBook. 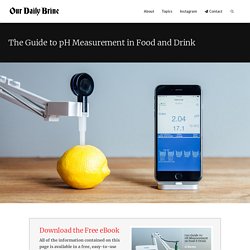 This guide will teach you best practices for testing pH of food and drink, as well as proper maintenance of pH meters and electrodes, including cleaning, calibration, and storage. Introduction to Testing pH in Food. Moving to another country could mess with your gut bacteria. Moving to a new country can be challenging, not just for us but also for our bacteria. 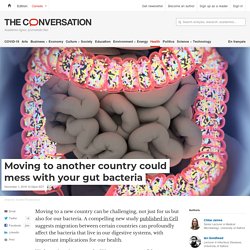 A compelling new study published in Cell suggests migration between certain countries can profoundly affect the bacteria that live in our digestive systems, with important implications for our health. We know immigrants to the US are more susceptible to developing obesity and metabolic diseases such as diabetes than either people from the same countries who don’t migrate or native-born US citizens, but we don’t really understand why. Governments’ dietary guidelines are harming the planet, study finds. Official dietary advice across the world is harming both the environment and people’s health, according to scientists who have carried out the most comprehensive assessment of national dietary guidelines to date. 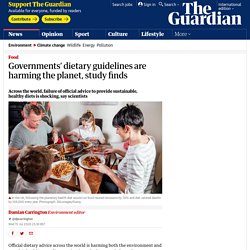 Food is responsible for a quarter of the emissions driving the climate crisis and millions of early deaths. The analysis assessed all available dietary guidelines, covering 85 countries and every region of the world. The researchers said governments’ failure to help people eat good diets was “shocking”. Love it or hate it, the musk stick is one of Australia's most misunderstood treats. By Kit Kriewaldt Updated about an hour agoSat 30 Mar 2019, 11:21pm In October last year, Australian cuisine received a dubious international honour with the opening of Sweden's Disgusting Food Museum. Australia's contribution to the museum collection includes Vegemite (of course) and witchetty grubs, but perhaps most surprising is the presence of the humble musk stick.

They're simple, unassuming lollies, not creepy, or crawly, or fermented. Could you eat the bum out of an elephant? Decoding Australia's colourful food slang. Posted about an hour agoMon 23 Dec 2019, 10:30pm "I could eat the bum out of an elephant. Let's have some tucker. " Translation: I'm really hungry. Let's eat. Ecological Understanding of Insects in Organic Farming Systems: Diversity, Stability, and Productivity. Mary E. 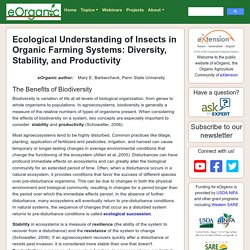 Barbercheck, Penn State University The Benefits of Biodiversity. This Is How Much Water It Takes To Make Your Favorite Foods. Extensive drought has Californians thinking twice about running the tap while brushing their teeth or taking that 20-minute shower. 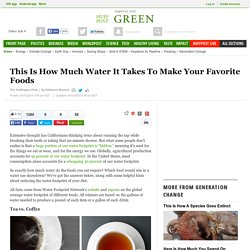 So exactly how much water do the foods you eat require? Which food would win in a water use showdown? Food and Coronavirus: Kale, Quinoa, Acai vs. Spam, Oreos, Popcorn. Photographer: Justin Sullivan/Getty Images North America We’re tracking the latest on the coronavirus outbreak and the global response. 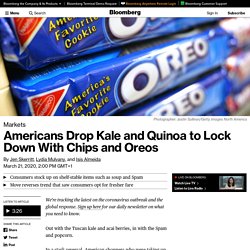 Sign up here for our daily newsletter on what you need to know. Out with the Tuscan kale and acai berries, in with the Spam and popcorn. In a stark reversal, American shoppers who were taking up healthier eating are gravitating back to old ways as they hunker down to weather the coronavirus pandemic. Think the world is ending? Grab a shovel, not a shopping trolley. How much water does it take to produce one litre of milk? The single biggest consumer of water in New Zealand is the dairy industry. As of 2010, farmers are permitted to take about 4707 million m3 of water per year from New Zealand’s rivers and aquifers to irrigate pasture, most of which is for dairying.

This is 44% of all consumptive uses (excluding the Manapouri hydropower scheme), and 68% of this water is allocated in Canterbury alone (21% in Otago). How much water is needed to produce food and how much do we waste? Between 500 and 4,000 litres of water are required to produce 1kg of wheat according to a report into food wastage published today. How Much Sugar in a Banana? Labelling. Yes, you can eat meat and care for the environment - ABC Life. 'The garbage can doesn't lie': The U.S. throws away 30% of its food.

Daily Bread. Here's What Kids All Over The World Eat Every Week, According To This Photography Project. This Photographer Took Pictures Of Food Kids Eat In One Week Around The World (25 Pics) What Foods Kids Eat Around the World in Photos. Food storage: How to keep your fruit and vegetables fresh and cut down on waste - Science News - ABC News. 'Super' foods are often nothing of the sort, Queensland nutritional researchers find. 'Eat breakfast like a king' is flawed advice. ASA24. Some types of vegetarian diet can raise heart disease risk. Eat For Health. The Hundred Foot Journey. Top 3 Ways to Support pH Balance - Alkaline Foods List. Learn How To Grow Mushrooms On Coffee. Fresh Fruit, Veg, Meat & Groceries Home Delivered. Healthy News and Information. The TOP 27 Alkaline Foods On The Planet! (Eat More To Prevent Cancer, Obesity And Heart Disease)

What Eating 40 Teaspoons of Sugar a Day Can Do to You - The New York Times. Nestle CEO declares water "food that should be privatized, and not a human right" The Petroleum Byproduct You Are Most Likely Eating. Фаст фуд, что же мы едим - Страница 3. McDONALD'S MEAT MYTHS. Засекреченная говядина или котлеты для McDonald’s.: ternovskiy — LiveJournal. This Is Why I Will Be Eating McDonald’s Again.

Marketing Food to Children: Anna Lappe at TEDxManhattan 2013. The Citric Acid - Uses, Benefits and Side Effects of the Citric Acid. Is Sugar The New Fat? Sweet enough? Separating fact from fiction in the sugar debate. Ready Nutrition - Homesteading, Preparedness, Disaster and Emergency Planning.