‎Why Is This Happening? with Chris Hayes: Understanding the Wealth Tax with Gabriel Zucman - What is a wealth tax? How would it work? Who would it benefit and who would it hurt? Odd Lots: Studying Keynes is More important than ever - The story of the most influential economist of the 20th century and what we can learn from them today. Odd Lots: Who Really Benefits From U.S. Dollar Dominance - Which Americans benefit from a strong U.S. dollar? And who is hurt by the high price of the U.S. dollar. ‎Odd Lots: Why It's A Big Problem That Economists Still Don't Understand Money - Why did so many mainstream economist get so many important predictions wrong in the last ten years. This American Life: Weekend At Bernanke's - How the Federal Reserve, an independent institution, creates money out of thin air.

‎Odd Lots: Meet The Godfather Of Cryptocurrency - An interview with David Chaum, an American cryptographer, who first wrote about digital cash in the early 80s. ‎Odd Lots: How Online Dating Is Reshaping the Entire Economy on Apple Podcasts. Odd Lots: How A Pizza Chain Stock Did As Well As Google - The story of why Dominoes stock has done as well as Google's stock since 2004 and what it tells us about the modern economy. Odd Lots: How Robinhood Makes Money On Free Trades - How does the popular stock trading app make money without charging customers. Odd Lots: Rep. Pressley On The Fed And Racial Inequality - An intereiw with one congresswoman who argues the Federal Reserve has a responsibility to focus on racial inequality. Odd Lots; The CEO of a $1.4 Billion REIT Explains Housing - A real estate investors take explains the housing markets. Planet Money: The Rational Madness Of The Used Car Salesman - The economics of the used car business. Planet Money: Modern Monetary Theory- An explainer of MMT, a school of thought that argues that massive increases in government spending does not require raising taxes or inflation.

Planet Money: Antitrust: Standard Oil: Antitrust laws told through the story of Standard Oil. Planet Money: Antitrust: The Paradox - The story of how the federal government came to focus less on ensuring competition and strangling monopoly in markets and more on the "consumer welfare" model. Planet Money: Dollar Stores Vs. Lettuce - What is responsible for the rise of dollar stores in the US? What are the good and bad impacts for low income Americans. Planet Money: How to Make it in the Music Business - How does the music industry work in the era of streaming. Cautionary Tales: Buried by the Wall Street crash - How two of the most influential economists in history failed to make accurate market predictions in their liftiem.

Two of the greatest economists who ever lived, Irving Fisher and John Maynard Keynes, thought they could predict the future and make a killing on the stock market. 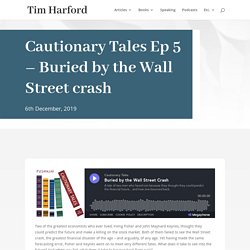 Thanks to the team at Pushkin Industries, Heather Fain, Mia Lobel, Carly Migliori, Jacob Weisberg, and of course, the mighty Malcolm Gladwell. [Apple] [Spotify] [Stitcher] Further reading Walter Friedman’s The Fortune Tellers is a key source on Fisher. Sylvia Nasar’s excellent Grand Pursuit has much more on both Keynes and Fisher. Against the Rules with Michael Lewis: The Magic Shoebox - How miliseconds can make the difference between winning and losing millions in High Frequency Trading.

Between Worlds: How to run a remote company. Between Worlds: AI and the future of gaming. My earliest memory of using a computer was in the early eighties, playing text adventures like Zork or The Hitchhiker’s Guide to the Galaxy on an Apple II computer. 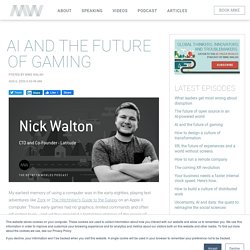 Those early games had no graphics, limited commands and often infuriating bugs - and yet they provided a tantalizing glimpse of the power of computers to create an immersive world (even with just text!) Thirty years later, it seems appropriate that one of the first examples of an AI-powered game is once again a text adventure. In this week’s podcast, I talk with Nick Walton, who created AI Dungeon, an AI-generated game that utilizes GPT-3, a text transformer engine built by OpenAI.

Nick is CTO and Co-Founder at Latitude. He has been working on deep learning technology for the last several years, working at autonomous vehicle companies and in a deep learning research lab at Brigham Young University. In this episode, you will learn. Between Worlds: The future of open source in an AI-powered world - How open source (free and publicly available) code has changed the world and it's importance in the future.

Open source technology is at the heart of everything we do. 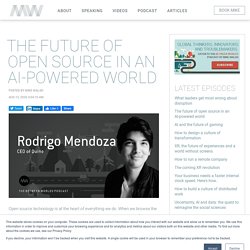 When we browse the Web, use our smartphones, or share content on social media - open software and systems are silently working behind the scenes. How did open source go from being a community of hobbyists and something that Steve Ballmer famously branded ‘a cancer that attaches itself in an intellectual property sense to everything it touches’, to a sophisticated economy of value and the basis of our Algorithmic Age? To explore this question and others, I spoke with Rodrigo Mendoza. Rodrigo is co-founder and CEO of Quine, a company building hyper-fluid interfaces between software developers and the labour markets. Previous to Quine, Rodrigo was an academic, a venture capital professional, and a freelance data-scientist. 99% Invisible: Perfume - History of the Perfume Industry. The world of high-end perfume is surprisingly lucrative, considering that scent is often the most ignored of our senses. 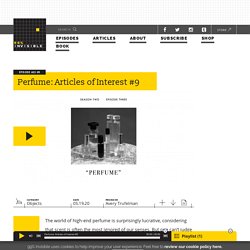 But one can’t judge a scent solely by the brand and shape of the bottle. With the right amount of attention, perfume can be a key to a whole olfactory world. Articles of Interest is a limited-run podcast series about fashion, housed inside the design and architecture podcast 99% Invisible. Launched in 2018, the show encourages people to rethink the way we look at what we wear and what it says about us. This second season of Articles of Interest features six interlocking episodes examining luxury and our collectively held ideas of glamour across the United States, from Chicago to Canal Street. Special thanks to natural perfume maestro Mandy Aftel, perfume critic Chandler Burr, bottle designer Chad Lavigne, as well as Dana Bruno and Bibi Praval at Mane.

99% Invisible: Knockoffs - The economics of the fake luxury goods market. Brands hold immense sway over both consumers and the American legal system. 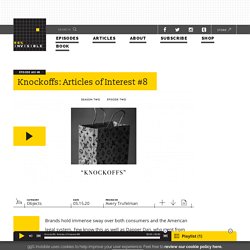 Few know this as well as Dapper Dan, who went from street hustler to fashion impresario and has spent time on both sides of American trademark law. Articles of Interest is a limited-run podcast series about fashion, housed inside the design and architecture podcast 99% Invisible. Launched in 2018, the show encourages people to rethink the way we look at what we wear and what it says about us. This second season of Articles of Interest features six interlocking episodes examining luxury and our collectively held ideas of glamour across the United States, from Chicago to Canal Street. Think of it like a podcast concept album, with recurring themes and threads that examine the ways we signal success and authenticity in America.

Articles of Interest was written and performed by Avery Trufelman, who spoke with Dapper Dan, Tuesday Bassen, and Kal Raustiala for this episode. 99 % Invisible: Wipe Out - The story of the toilet paper industry and how it was upended by the coronavirus pandemic. If you have tried to buy toilet paper in the last few weeks, you might have found yourself staring at an empty aisle in the grocery store, wondering where all the toilet paper has gone. 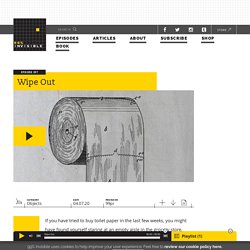 Concerns over the toilet paper supply is not limited to the United States. In the Netherlands, a Dutch worker went viral after he filmed a video of himself zooming around a warehouse stacked to the rafters with toilet paper, laughing maniacally. Planet Money: Planet Money Buys Oil - The oil industry explained by a podcast buying 100 barrels of oil and following it out of the ground, through a refinery, and into someone's gas tank. Planet Money: Kid Rock Vs. The Scalpers - The economics of ticket scalping and how some high profile artists are fighting back.

The Daiy: ‘Closing the Restaurant That Was My Life for 20 Years’ - How different will the restaurant industry look after coronavirus pandemic? On the night before I laid off all 30 of my employees, I dreamed that my two children had perished, buried alive in dirt, while I dug in the wrong place, just five feet away from where they were actually smothered. 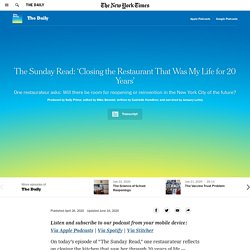 I turned and spotted the royal blue heel of my youngests socked foot poking out of the black soil only after it was too late. For 10 days, everyone in my orbit had been tilting one way one hour, the other the next. Ten days of being waterboarded by the news, by tweets, by friends, by my waiters. Of being inundated by texts from fellow chefs and managers former employees, now at the helm of their own restaurants but still eager for guidance.

Of gentle but nervous pleas from my operations manager to consider signing up with a third-party delivery service like Caviar. We banked $1,144 in total sales. GlobalMarketsNew York [After we closed down Prune, we diligently conserved our resources until we didnt.] TED Radio Hour: What We Value - Is It Time To Rethink What Our Economy Should Value?