Botswana Farmers share blockchain via Startup Compete. Farm Shares in Botswana How can Botswanan Farmers raise the capital needed to begin fully utilizing the water and topsoil of their lands? 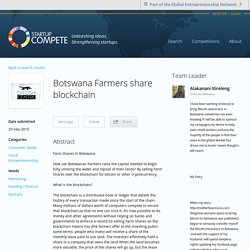 By selling Farm Shares over the blockchain for bitcoin or other cryptocurrency. What is the blockchain? The blockchain is a distributed book or ledger that details the history of every transaction made since the start of the chain. Many millions of dollars worth of computers compete to secure that blockchain,so that no one can trick it. Blockchain and the Internet of Things disrupting Food & Agriculture. In the last decades we have seen a tremendous increasing wave of mass food production in order to supply the high demand of developed countries. 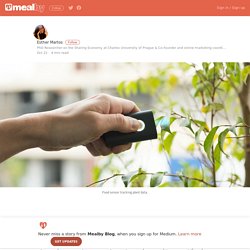 Consumers claim food quality and transparence in the process but, without the ability to track and trace food through the entire supply chain, producers have failed providing meaningful solutions. With the rise of technologies to analyze big data, track and trace products, and intelligent supply chain mapping, many of these problems can be solved with a few sensors and apps on our smartphone. Agricultural and nutritional experts have already identified innovative technologies that would improve not only the quality of the food and the transparency of the process, but it will help us optimising the resources needed to bring food from the farm to the kitchen while reducing the negative impact on the environment. Sydney agritech startup Full Profile uses blockchain tech to help farmers get paid in real time. The potential of Australia’s agricultural sector was recently brought to light by a StartupAUS report, revealing that, supported by agritech, the agricultural space can develop into a $100 billion industry by 2030. 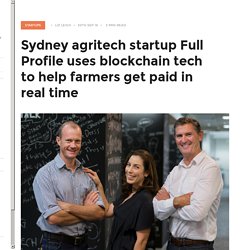 The report sought to highlight how technology can improve farm productivity, management and sustainability through the use of drones, smart sensors and robotics. However, a technology that has been less talked about in terms of agritech is blockchain. Traditionally used in the fintech sector, blockchain’s multitude of applications has caused other sectors like health and now agriculture to consider its use.

Still yet to be widely adopted in Australia, mainly due to people still questioning what it is and how it can be used, blockchain technology is now being recognised as a tool to speed up settlements and lower costs for both small and large companies. “This is hugely important as it reduces counterparty risk for growers, a known problem in the agribusiness industry. Blockchain Joins Efforts to Improve Food Traceability amid Rising Waste and Safety Fears. Blockchain technology has emerged as a tool for addressing an important global issue: the growing complexity of the food supply chain and the increasing amount of wasted food, according to a senior research fellow at the University of Surrey. 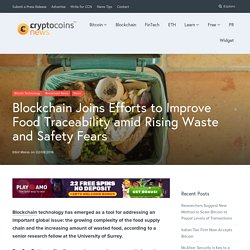 Writing in The Conversation, an online source of information from the academic and research community, senior research fellow, Phil Godsiff said that a recent analysis suggested that half of U.S. food production is wasted, with global estimates above 30 percent. The growing use of sensors in the food supply chain, paired with blockchain technology, could reduce food waste and make food data more transparent through the supply chain.

Food Supply Chain in Crisis Retailers want perfect produce, leading to waste throughout the food supply chain. Blockchain Could Save Agriculture In Nigeria - BTC Nigeria. With the decision of the Federal government of Nigeria to diversify the Nigeria economy and with the inadequate availability of agricultural products in the country, it seems that we would have to begin to take agriculture seriously. 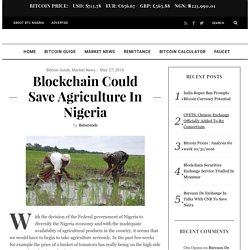 In the past few weeks for example the price of a basket of tomatoes has really being on the high side compared to what it used to be. If we must go farming as a country, we would have to go on a big scale so as to cater for the huge population, we will need everything to improve agriculture from what it used to be, one of the things we might want to improve upon is the use of technology in agricultural sector, which by far seems to be the sector that is least impacted by technology.

Blockchain Tech Can Make A Significant Impact On Agriculture. There are many possible use cases for blockchain technology these days. 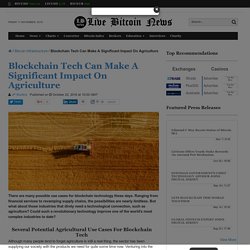 Ranging from financial services to revamping supply chains, the possibilities are nearly limitless. But what about those industries that direly need a technological connection, such as agriculture? Could such a revolutionary technology improve one of the world’s most complex industries to date? Several Potential Agricultural Use Cases For Blockchain Tech.

Farming Business in a Russian Village Transferred onto Blockchain. Nocookies. Facebook App: Open links in External Browser There is a specific issue with the Facebook in-app browser intermittently making requests to websites without cookies that had previously been set. This appears to be a defect in the browser which should be addressed soon. Australian software developer brings blockchain to local grains industry - Rural News - ABC Rural. Posted A Sydney-based technology firm says blockchain technology could solve a range of problems for grain growers by increasing the integrity of the whole grain supply chain. 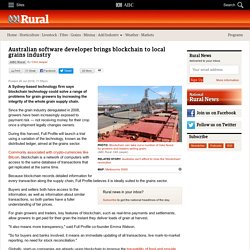 Since the grain industry deregulated in 2008, growers have been increasingly exposed to payment risk — not receiving money for their crop once a shipment legally changes owners. Sans titre. Blockchains could help restore trust in the food we choose to eat. Companies around the world are exploring blockchain, the technology underpinning digital currency bitcoin. 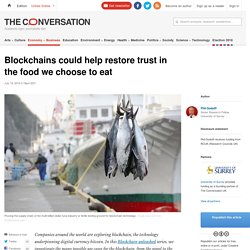 In this Blockchain unleashed series, we investigate the many possible use cases for the blockchain, from the novel to the transformative. If the food industry is not in crisis, it certainly contains an increasing level of complexity and associated risks. A recent analysis suggested 50% of US food production is wasted, with global estimates above 30%. Retailers want perfect produce, leading to wastage occurring throughout the food supply chain. They also seek low prices, leading to industrialisation of processes. The Blockchain and Mobile Money for Agriculture in Developing Countries? Many compare the emergence of the decentralized blockchain payments system to the emergence of the internet. 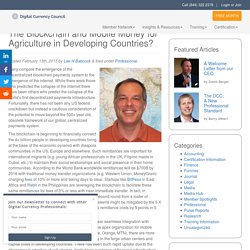 While there were those who predicted the collapse of the internet there have been others who predict the collapse of the world’s first decentralized payments infrastructure. Fortunately, there has not been any US federal crackdown but instead a cautious consideration of the potential to move beyond the 500+ year old, obsolete framework of our global, centralized payments system. Blockchain: can it be of help for the agricultural industry?

During my economics study in the seventieth of last century (indeed a long time ago!) 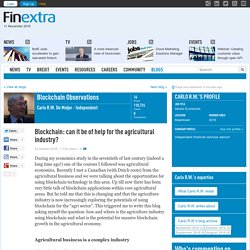 One of the courses I followed was agricultural economics. Recently I met a Canadian (with Dutch roots) from the agricultural business and we were talking about the opportunities for using blockchain technology in this area. Up till now there has been very little talk of blockchain applications within core agricultural areas. But he told me that this is changing and that the agriculture industry is now increasingly exploring the potentials of using blockchain for the “agri sector”.

Blockchain could change Agriculture Industry – InfoCoin. Agriculture is one of the main sources of employment in a Global Level, Counting with About 40% of the global workforce and big industry now is using Blockchain. They have many agricultural solutions with the potential of the Ledger Distributed emergence, this according to Agfunder News.

Using Smart Technology Agriculture blockchain can transmit data to Climate Changes test, SMS alerts, machinery Protocol and GPS positioning. With Filament Platform Users connect physical objects and existing networks ” Wider networks and applications” becoming the smart Agricultural Technology in reliable infrastructure. World’s First Village To Adopt Blockchain In Its Farming & Management. The small village of Kolionovo, outside of Moscow Russia, has become the first in the world to integrate Blockchain technology into its farming business and agriculture management. Kolionovo uses a decentralized Blockchain system for some local organizational, financial and legal issues. Moreover, people in this village launched their local cryptocurrency tokens called “Kolions” to manage their economy and business by themselves.

Kolion tokens – local tool against crisis CoinIdol.com world cryptocurrency news outlet contacted the inspirer of the project in the village, Mikhail Shlyapnikov, and asked for details. FarmShare: Blockchain Community-Supported Agriculture. Practical Applications of Blockchain Technology - Agriculture. Filament lets you build a connected business without becoming an expert on security, scalability, or network stacks. Blanket a factory in sensors, or control the streetlights of an entire city - Filament's standalone networks span miles and last for years, all without WiFi or cellular. The Filament Tap lets you deploy a secure, all-range wireless network in seconds. Taps can talk directly to each other at distances of up to 10 miles, and since each Tap has BLE, you can connect them directly to your phone, tablet, or computer. With built-in environmental monitoring, a USB port for your own sensor or device, and a battery life of up to 20 years, it's the perfect grab-and-go connectivity solution.

"Filament is a startup that is taking two of the most overhyped ideas in the tech community—the block chain and the Internet of Things - and applying them to the most boring problems the world has ever seen" From Bitcoin to Agriculture: How Can Farmers Benefit from Blockchain? - AgFunderNews. Editor’s Note: Emma Weston is co-founder and CEO of Full Profile, where she leads blockchain strategy and development under the AgriDigital brand.

She is also a grain grower in Australia. Here, Weston, and co-author Sarah Nolet, founder of food and ag consultancy AgThentic, explain how the agriculture industry is using blockchain, and the challenges ahead for this segment of the industry. Update: Full Profile recently pitched at Finovate in New York City. Sans titre.