Viral Acharya quits RBI: Implication for monetary policy, reforms, markets. The resignation of Reserve Bank of India’s (RBI’s) deputy governor Viral Acharya six months ahead of the scheduled completion evoked mixed reactions from experts, especially at a time when the financial sector has seen a number of developments over the past one year. 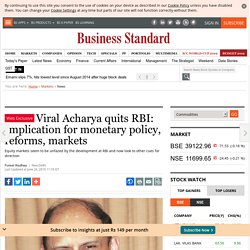 In the past three years, the central bank has seen the sudden exit of Raghuram Rajan and Urjit Patel as RBI Governors, and now Viral Acharya as its Deputy Governor, who was in charge of the Monetary Policy Department and the Department of Economic and Policy Research, among others. “Dr. Acharya’s departure is not a complete surprise, as frictions between him and the government on issues related to central bank independence had come to the fore,” wrote Sonal Varma, managing director and chief India economist at Nomura in a co-authored report with Aurodeep Nandi. ALSO READ: RBI Deputy Governor Viral Acharya quits six months before his term ends. Flipkart's Binny Bansal sells Rs 531 cr-worth stake to Walmart: Report. 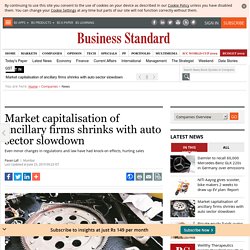 The current slowdown, which is a combination of complex regulations that go into effect next year, heightened competition across segments, and less-than-optimum consumer sentiment, has been the most protracted in a decade, and side- effects are being felt even by dealers who distribute vehicles to the end consumer. Govt will bring bigger opportunity for transformation in next 5 years: PM. The Narendra Modi government in its second term is looking to do much more than it did during its first tenure. 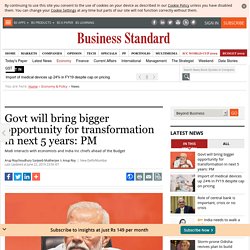 The next five years will present a bigger opportunity for transformation than the government had in the last five, the PM is learnt to have said in a meeting with economists and chief executives of India Inc at the Niti Aayog on Saturday. This was part of a series of meetings that the PM lined up ahead of the Union Budget to be presented on July 5. In line with the goal to be a $5-trillion economy in five years, the PM reiterated that the country needed to benchmark itself with the global best practices, an official who attended the meeting said.

The institutional structure designed for a different era had become sort of a burden and that must change, according to the PM. Lateral entry in the government was among the ideas discussed to break from the past. Around 40 economists and corporate chiefs attended the meeting. GST Council cracks the whip on profiteering, okays Aadhaar for registration. Venkaiah Naidu suggests wider debate around lapsed Bills in Rajya Sabha. Vice President M Venkaiah Naidu, who is also the Rajya Sabha Chairman, on Friday suggested a wider debate about rules relating to lapsed Bills in the Upper House. 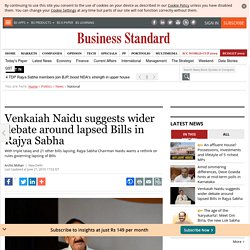 Rajya Sabha being a continuous House, no Bill introduced in the Rajya Sabha ever lapses. Currently, the pendency in the Rajya Sabha stands at 33 Bills. Sugarcane arrears touch Rs 18,958 cr; UP mills alone owe over Rs 11,000 cr. Sugarcane arrears to farmers touched nearly Rs 19,000 crore as on June 18 of the ongoing marketing year ending September with maximum amount owed by sugar mills in Uttar Pradesh, according to the government data. 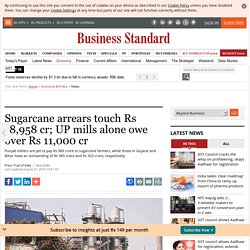 Mills in Uttar Pradesh owe the maximum amount at Rs 11,082 crore, followed by Karnataka (Rs 1,704 crore) and Maharashtra (Rs 1,338 crore). Punjab millers are yet to pay Rs 989 crore to sugarcane farmers, while those in Gujarat and Bihar have an outstanding of Rs 965 crore and Rs 923 crore, respectively, official data showed. "Payment of cane price to sugarcane growing farmers by the sugar mills is a continuous process. However, on account of surplus sugar production, during the previous sugar seasons, the sugar prices remained depressed which adversely affected the liquidity of the sugar mills resulting in accumulation of cane price arrears of the farmers," Food Minister Ram Vilas Paswan said in a written reply to the Rajya Sabha.

'No hurry': Trump reveals why he decided to abort strikes on Iran. HDFC to acquire Apollo Munich Health Insurance for Rs 1,347 crore. Mortgage lender Housing Development Finance Corporation (HDFC) will acquire controlling stake of 51.2 per cent in Apollo Munich Health Insurance for about Rs 1,347 crore from Apollo Hospitals group and few employees who hold stake in the standalone health insurer. 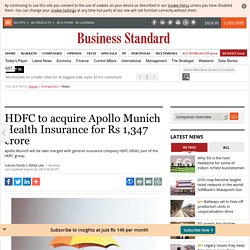 After the acquisition, Apollo Munich Health Insurance will be merged with the non-life insurance arm of mortgage lender HDFC Ergo. Why 5G is the next headache for some of India's richest businessmen. After racking up $59 billion of net debt to survive a brutal war in the world’s second-biggest phone-services market, some of India’s billionaires are bracing for more as their next battle looms: 5G. 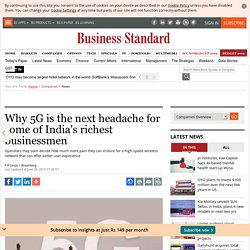 India seeks to raise $84 billion this year from a sale of airwaves -- most of it for the latest technology tipped to revolutionize connectivity -- posing a conundrum for the carriers controlled by tycoons including Mukesh Ambani, Asia’s wealthiest man. Investment would mean more borrowings, but the reward could be revenue streams never seen before. ED arrests two former IL&FS executives in alleged money laundering case. Trump admin mulling caps on H-1B visas to deter data rules: Report. The United States has told India it is considering caps on H-1B work visas for nations that force foreign companies to store data locally, three sources with knowledge of the matter told Reuters, widening the two countries' row over tariffs and trade. 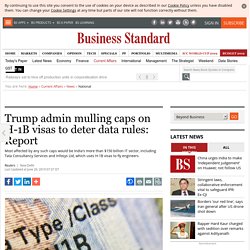 The plan to restrict the popular H-1B visa programme, under which skilled foreign workers are brought to the United States each year, comes days ahead of US Secretary of State Mike Pompeo's visit to New Delhi. India, which has upset companies such as Mastercard and irked the US government with stringent new rules on data storage, is the largest recipient of these temporary visas, most of them to workers at big Indian technology firms. The warning comes as trade tensions between the United States and India have resulted in tit-for-tat tariff actions in recent weeks. From Sunday, India imposed higher tariffs on some US goods, days after Washington withdrew a key trade privilege for New Delhi. Bengaluru, Noida, Pune: Top student accommodation destinations in India. Bengaluru, Jaipur, Pune and Noida have emerged as the top student accommodation destinations, according to a recent study by global real estate research and consulting firm Knight Frank. 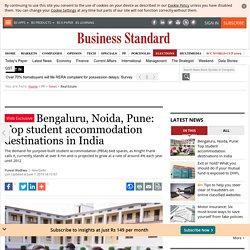 The demand for purpose-built student accommodation (PBSA) bed spaces, as Knight Frank calls it, currently stands at over 8 million and is projected to grow at a rate of around 8 per cent each year until 2025. At this point total demand for PBSA bed spaces will total around 13 million across the country. The PBSA market in India, Knight Frank says, is still in its infancy, despite the country boasting one of the largest populations of undergraduate students in the world.

The Reserve Bank of India (RBI) in its monetary policy meeting on Thursday announced the waiver of certain digital transaction fees and set up a committee to review the long-disputed automated teller machine (ATM) interchange. 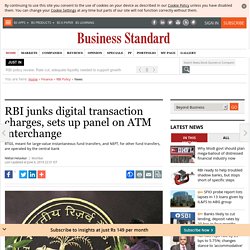 Waiver of NEFT, RTGS charges In order to accelerate digital payments in the country, the RBI decided to remove the charges it levied on transactions done under Real Time Gross Settlement (RTGS) and National Electronic Funds Transfer (NEFT). Air India deal likely to be sweetened further, PIM expected by July 7. Moving at jet speed, the two-stage bid process for selling of entire 100 per cent equity stake in national carrier Air India could kickstart as early as July 7. The government has decided to come out with the preliminary information memorandum (PIM) inviting expression of interest (EoI) by the first week of July. India ETF adds most cash since 2015 as biz-friendly Modi's win lifts stocks. International investors are heading to India following the re-election of business-friendly Narendra Modi as prime minister.

The $5.4 billion iShares MSCI India exchange-traded fund, ticker INDA, lured more than $182 million last week, the most in more than four years, data compiled by Bloomberg show. Investors also added the most since September to the $1.5 billion WisdomTree India Earnings Fund, or EPI, in the period through Friday. “A lot of western investors really like having a conservative like Modi re-elected,” said Andy Wester, a senior investment analyst at Proficio Capital Partners.

ED summons senior executives of Deloitte in IL&FS money laundering case. Trouble is mounting for audit firms as the Enforcement Directorate (ED) issued summons to senior executives of Deloitte Haskins and Sells in connection with an ongoing money laundering probe against Infrastructure Leasing & Financial Services (IL&FS). According to enforcement sleuths, audit firms and auditors are likely to be called for probe soon. Confirming the development, an ED official said Deloitte’s senior management was asked to appear before the agency on June 12. “We have asked the audit firm to get relevant documents required in the case and indicated that all the related firms and individuals will be rounded up.” SC allows SFIO to reopen and recast IL&FS accounts for last five years. The Supreme Court on Tuesday allowed the Serious Fraud Investigation Office (SFIO) to reopen and recast the accounts of Infrastructure Leasing & Financial Services (IL&FS) and two of its key subsidiaries of five years starting 2012-13 (FY13).

The order came on a plea moved by the Ministry of Corporate Affairs (MCA), which sought to examine the books of IL&FS, IL&FS Financial Services (IFIN), and IL&FS Transportation Networks (ITNL) between FY13 and FY18. The SFIO is a multi-disciplinary organisation under the MCA for detecting and prosecuting or recommending for prosecution white-collar crimes. The recast of books, tax experts said, would help the SFIO find out exactly how they were inflated and by how much. It will also help determine the benefits accrued to the people involved in the process, which could aid in recovery. “At present, the SFIO has accessed IL&FS servers and other documents.

I-T dept extends deadline for employers to issue Form 16 till July 10. Walmart faces major India test over unit Flipkart's legal spat with GOQii. An Indian startup's legal challenge against a Walmart unit claiming losses caused by sharp discounting of its products is winning support from other online sellers, in what is shaping as a key test of how the giant retailer operates in the country. The legal tussle between GOQii, a seller of smartwatch-type health devices, and Walmart's Flipkart unit, comes just months after India imposed stricter rules for foreign investment in e-commerce that were aimed at deterring such sharp discounts.

GOQii sued Flipkart last month in a Mumbai court, alleging its devices were discounted by around 70% to the retail price, much more than the two sides had agreed to, legal documents related to the case showed. The case will next be heard on Friday. Business Standard. Trade mis-invoicing cost India $13 bn in tax revenues in 2016, says report. Manipal group set to own 51% stake in health insurance JV with Cigna. Jet a 'wake up call'; policymakers to be partly blamed: SpiceJet chief. The failure of Jet Airways should be a "wake up call" for the aviation industry and at least part of the blame should be at the doorstep of the policymakers as the cost structure is high, SpiceJet chief Ajay Singh has said. How BJP used WhatsApp to snare Mamata and reap poll dividends in Bengal. Two days ahead of the fifth phase polling in West Bengal, Mamata Banerjee was driving down Chandrakona road to campaign for the Arambagh seat. Indian elections become world's most expensive: This is how much they cost.

Elections in the world’s biggest democracy have become the most expensive too. Nilekani panel wants cheaper digital payment to improve financial inclusion. The high-level committee on deepening of digital payments, led by Infosys co-founder Nandan Nilekani, has recommended a reduction in costs to widen the acceptance infrastructure and improve digital financial inclusion. Two-wheeler sales continue downhill journey in May due to liquidity crunch. Two-wheeler sales continued to skid in May as buyers deferred purchases owing to liquidity crunch, poor sentiment, and rural distress, shows the monthly sales data released by scooter and motorcycle makers on June 1.