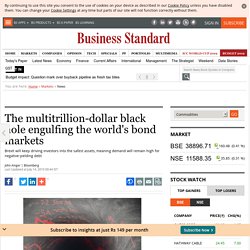 Negative-yielding debt — bonds worth less, not more, if held to maturity — is spreading to more corners of the bond universe, destroying potential returns for investors and turning the system as we know it on its head. Now that it looks like sub-zero bonds are here to stay, there’s even more hand-wringing about the effects for mom-and-pop savers, pensioners, investors, buyout firms and governments. Why invest in a bond that will lose you money? Typically, bonds are the safest assets on the market, so many investors seek them out at times of heightened market stress, say a US-China trade war or tensions in the Persian Gulf. 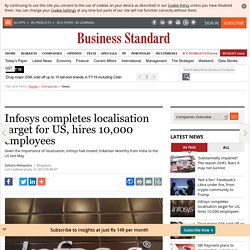 The tech major is planning to raise the number of locals in the coming quarters in an effort to build an employee pyramid. The US, contributing more than 60 per cent of Infosys’ total revenue, is the most critical market for the firm. 'Substantially impaired': The reason DHFL fears it may not survive. One of India's biggest housing finance companies, Dewan Housing Finance Corp Ltd (DHFL) , has warned that its financial situation was so grim that it may not survive. 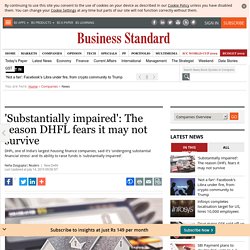 The company said it was "undergoing substantial financial stress" and its ability to raise funds was "substantially impaired and the business has been brought to a standstill with there being minimal/virtually no disbursements. " "These developments may raise a significant doubt on the ability of the company to continue as a going concern," it said in notes accompanying results for the fourth quarter ending March 31, signed by Chairman and Managing Director Kapil Wadhawan. DHFL posted a net loss of Rs 2,223 crore ($324.3 million) during the quarter compared with a profit of Rs 134 crore in the same period a year earlier. Chandrayaan-2: A timeline of India's mission to the moon from 2003 to 2019. Just a tap on the wrist? Facebook $5-bn privacy settlement approved by FTC. US officials approved a record $5 billion privacy settlement with Facebook Inc. to resolve the Cambridge Analytica data scandal, people said, prompting an immediate outcry from lawmakers and privacy advocates who said it didn’t go far enough. 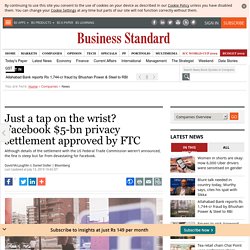 Although details of the settlement with the US federal trade commission (FTC) weren’t announced, the fine is steep but far from devastating for Facebook. The company, which reported revenue of almost $56 billion in 2018, had set aside $3 billion in anticipation of the fine. “This reported $5 billion penalty is barely a tap on the wrist, not even a slap,” said Senator Richard Blumenthal, a Connecticut Democrat , who called for a hearing on the agreement. Halep thwarts Serena's historical bid with Wimbledon final triumph.

Simona Halep torpedoed Serena Williams's latest bid to capture a record-equalling 24th Grand Slam on Saturday when she stormed to a sensational victory in a 56-minute Wimbledon final. 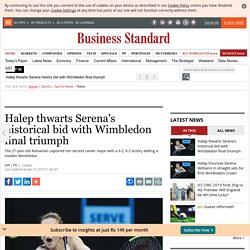 Cong-JD(S) in frenzy to get K'taka rebels back as BJP calls for trust vote. With the Karnataka political crisis continuing, coalition leaders Saturday were locked in hectic parleys to pacify rebel MLAs, as the BJP upped the ante and said it would press Chief Minister H D Kumaraswamy to seek the trust vote Monday. 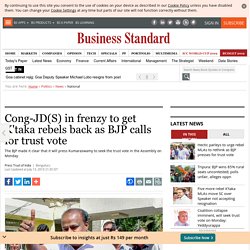 A day after Chief Minister H D Kumaraswamy made a surprise announcement in the Assembly that he would seek a trust vote, efforts were intensified to reach out to the dissident legislators. After almost day-long negotiations, it appeared that Congress had made some headway in pacifying one of its MLAs, M T B Nagaraj, who hinted that he might consider withdrawing his resignation, but fell short of making any final announcement till the evening. The BJP, however, made it clear that it will press Kumaraswamy to seek the trust vote in the Assembly on Monday, a day prior to the Supreme Court hearing the petition of rebel MLAs, who have resigned. 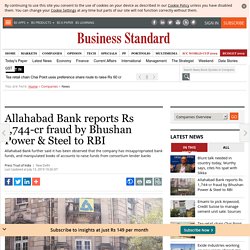 Allahabad Bank in a regulatory filing said on the basis of forensic audit investigation findings and CBI filing FIR against the company and its directors, alleging diversion of funds from banking system by Bhushan Power and Steel Ltd (BPSL), a fraud of Rs 1,774.82 core has been reported by the bank to the Reserve Bank. Last week, PNB reported a fraud worth Rs 3,805.15 crore by the bankrupt steel company BPSL by misappropriating bank funds and manipulating its books of accounts.

Around 85 per cent of PNB's Rs 4,399 crore exposure to the company had been siphoned off. Allahabad Bank further said it has been observed that the company has misappropriated bank funds, and manipulated books of accounts to raise funds from consortium lender banks. Blunt talk needed in country today, Murthy says, cites his spat with Sikka.

Infosys co-founder Narayana Murthy said on Saturday that looking at "what is happening in different parts of the country today", the youth need to state bluntly that this was not the country for which our forefathers got freedom. 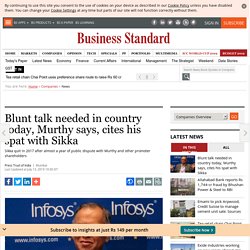 Talking about his spat with Vishal Sikka, Infosys' first non-promoter chief executive who quit in 2017, he said he had to speak up when he saw core values of the IT giant being thrown into the "dustbin". Speaking at a panel discussion at St Xavier's College in Mumbai, Murthy referred to Sikka's confrontation with him and other promoters, without naming him, when asked about the concerns he had expressed about the way Infosys was being led after his retirement. Women make up 30% of Chandrayaan-2 workforce, two lead the mission. Among the many firsts for the Chandrayaan 2, this mission would be the first for the space agency to have two women leading it as project and mission directors, with two decades of experience in Isro. 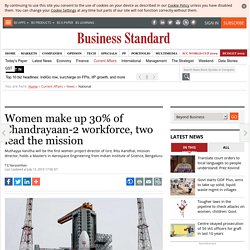 Besides, nearly 30 per cent of the members working on the Chandrayaan-2 mission are women, said K.Sivan, chairman, Indian Space Research Organisation (ISRO). Muthayya Vanitha, who will be the first women project director of Isro, is an electronics systems engineer and she has the responsibility of Chandrayaan-2 mission. Earlier she was responsible for data handling systems for India’s remote sensing satellites was reluctant to accept the historical responsibility. M Annadurai, the project director for Chandrayaan-1 and who reportedly persued Vanitha, was quoted saying she has excellent problem-solving skills and team management capabilities, which are crucial for such projects. Manufacturing, mining pull down industrial output growth to 3.1% in May. Manufacturing and mining pulled down industrial output growth to 3.1 per cent in May, compared to 4.3 per cent in April. Experts partially attributed this to cut in private spending during elections. However, if one assesses growth in the Index of Industrial Production (IIP) in a longer series, the May numbers are not too disappointing. 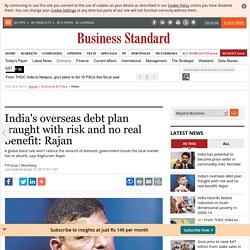 A global bond sale won’t reduce the amount of domestic government bonds the local market has to absorb and the country should worry about short-term “faddish investors buying when India is hot, and dumping us when it is not,” Rajan said in a column in The Times of India on Saturday. Rajan adds to the growing chorus of opposition to the plan Finance Minister Nirmala Sitharaman announced earlier this month. The plan to sell bonds overseas comes as Prime Minister Narendra Modi faces shrinking options to raise funds as a slowing economy crimps tax revenues. Pension, provident funds to get top priority in repayment from IL&FS: NCLAT. The National Company Law Appellate Tribunal (NCLAT) on Friday said pension and provident funds which had invested in Infrastructure Leasing & Financial Services (IL&FS) would have priority in payment from all categories of companies, whether classified as green, amber or red.

While the companies classified under the green category by the new board of IL&FS have been allowed to service their debt to all secured and unsecured creditors, those under amber category had been allowed to service debts of only senior secured creditors. During the last hearing on May 30, the NCLAT had said that if IL&FS companies under the amber category were not reclassified into the green category, the appellate tribunal will pass orders asking such companies to service 100 per cent debt obligations of the provident and pension funds.

On Friday, the new management of IL&FS said that of the 13 companies under the amber category, three had been reclassified as green. India, US trade talks end in Delhi without major progress: Report. U.S. and Indian trade negotiators ended talks on Friday without making major progress on a range of disputes over tariffs and other protectionist measures imposed by both sides that are straining bilateral ties, according to officials with knowledge of the discussions. Many of the toughest questions on agricultural commodities, e-commerce, and steel and aluminum, have been put off until Commerce and Industry Minister Piyush Goyal goes to Washington for talks with United States Trade Representative Robert Lighthizer next month. The dates for that trip are yet to be settled. "No breakthrough," said one of the senior Indian officials involved in the talks in New Delhi, which lasted a little over three hours.

He declined to make any further comment. Two other Indian officials said they hoped that some of the issues will be resolved when Goyal goes to Washington. The two sides resumed talks after U.S. Demonetisation was no rash call; we missed the many hints months earlier. THE RISE OF GOLIATH: TWELVE DISRUPTIONS THAT CHANGED INDIAAuthor: A K BhattacharyaPublisher: Penguin Random House Pages: 360Price: Rs 699 Hours before the prime minister’s scheduled address to the nation on 8 November 2016, a high-level meeting took place at the prime minister’s office.

When the government put out an advisory at around 7 pm that the prime minister would address the nation around 8 pm, speculation was rife about whether India was planning a second surgical strike or something similar had already been undertaken, or the prime minister would be making a bigger announcement concerning Pakistan. 'Paan ki dukaan doing well': Bhatia group responds in IndiGo promoters feud. Investors may find it hard to dodge India's plan to tax the super rich. Overseas investors may struggle to circumvent India’s plan to tax the very rich as the option proposed by the tax authorities to sidestep the levies isn’t easy to implement. With frightened investors wiping off Rs 2.9 trillion ($42 billion) from the benchmark S&P BSE Sensex since the budget on July 5 through Wednesday, tax officials have suggested that global funds convert themselves from trusts -- a structure followed by several foreign funds that invest in India -- to corporates as a way to avoid paying the higher surcharge.

The devil’s in the detail. “Under General Anti-Avoidance Rules, tax authorities can question the move and even deny tax benefits to an entity if the change in the structure is purely led with an intention to avoid tax,” said Punit Shah, a partner at Mumbai-based tax consultants Dhruva Advisors LLP. Axis Bank says will lend cautiously over new emerging risks in economy.

TCS is the country's second-most valuable company and its earnings are seen as a marker of the $150 billion IT services sector's health. India imposing tariffs on US products, no longer acceptable, says Trump. Sebi seeks details from IndiGo on co-promoter complaints about deviations. PTI Stories - Business Standard. Railway union says will launch protest after Budget proposes privatisation. Stating that the Union Budget has revealed the intention of the government to go ahead "aggressively" towards corporatisation and privatisation of railways, the National Federation of Indian Railwaymen (NFIR) has said its affiliates are going to launch massive protests across the country against the move.

Union Finance Minister, Nirmala Sitharaman in her Budget speech on Friday proposed that railways should use Public Private Partnership (PPP) model for faster development, rolling stock manufacturing and the delivery of freight. "The Budget reveals the government's intentions to aggressively proceed towards corporatisation and privatisation. Seven of top-10 firms add Rs 53,732 cr in m-cap; HDFC biggest gainer. Seven of the 10 most valued domestic firms together added Rs 53,732.55 crore in market valuation last week, with HDFC emerging as the biggest gainer. Budget 2019: Is the rationalised GST target still too ambitious? The Union government rationalised its expectations for tax revenue collection in FY20 while presenting the Budget.