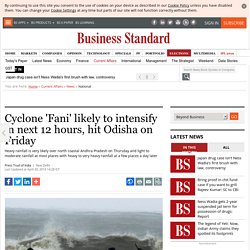 In its 12 pm bulletin, the Cyclone Warning Division of the IMD said Fani (pronounced as Foni) lays over southeast and adjoining southwest Bay of Bengal, about 830 km nearly south of Puri (Odisha) and 670 km south-southeast of Vishakhapatnam (Andhra Pradesh) and about 680 km northeast of Trincomalee (Sri Lanka). "It is very likely to intensify further into an extremely severe cyclonic storm during the next 12 hours.

92 trips to 57 countries since 2014: Here's what PM Narendra Modi achieved. As Indian Prime Minister Narendra Modi bids for reelection, his party has said his skillful diplomacy on the world stage has increased India’s global stature and brought in a flood of investment. 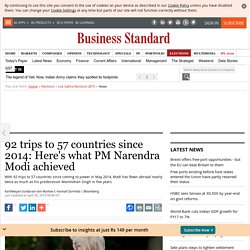 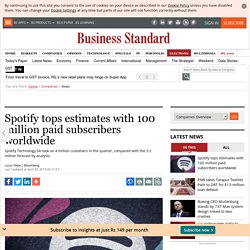 Spotify Technology SA took on 4 million customers in the quarter, compared with the 3.3 million forecast by analysts. But its first-quarter loss was 79 cents a share, wider than the 41-cent loss analysts expected. After a brief rise, the stock fell as much as 2 percent to $135.50 in New York trading. CARE places PNB HFC rating on watch, flags rising share of corporate loans. CARE Ratings has placed PNB Housing Finance Ltd's ( PNBHFL) ratings on watch with developing implications due to requirement to raise money to maintain comfortable capital adequacy and gearing level. 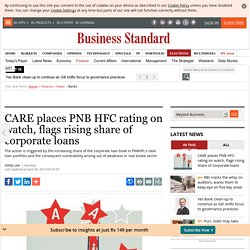 The action is triggered by increasing share of corporate loan book in PNBHFL's total loan portfolio and the consequent vulnerability arising out of weakness in real estate sector. CARE in a early morning statement said the impact of the stake sale announced by Punjab National Bank (PNB; promoter of PNBHFL) in PNBHFL is also to be seen. PNBHFL debentures and bonds carry "AAA" ratings. CARE will continue to monitor developments with regard to the above and would take up review of rating when more clarity emerges on the above aspects, it added. The ratings of PNBHFL continues to derive strength from its experienced management team, brand linkages with PNB, consistent growth in loan portfolio, profitability profile of the company.

Cyclone 'Fani' may turn into severe storm, NDRF, Coast Guard on high alert. Campus placement at IIT Madras up 15%, job offers at an all time high. Campus placements at the Indian Institute of Technology, Madras (IIT-M) are up 15 per cent during the Academic Year 2018-19, with the total recruitment of 964 students as compared to 834 students last year. 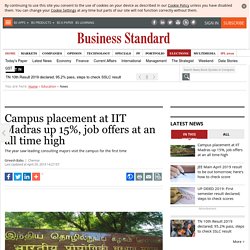 The year saw leading consulting majors visit the campus for the first time. Google returned and several data science firms, as well as companies in the analytics space, visited the campus, said IIT-M officials. Elections 2019: Pollution becomes an issue with promises made in manifestos. Promises to fight the world’s most toxic air have made it to the manifestos of major political parties for the first time in Indian elections. 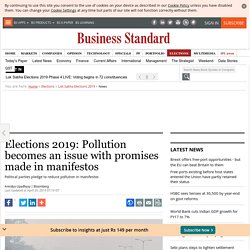 Major political parties such as the ruling Bharatiya Janata Party, the opposition Indian National Congress and the Aam Aadmi Party have pledged to combat the crisis by taking measures ranging from setting deadlines, introducing new emission standards to promoting electric vehicles in a bid to fight toxic air. That is a change from the 2014 elections when none of the party manifestos had any mention of clean air or pollution. Where politicians invest: Mutual funds, RIL, and even Kingfisher Airlines. Fixed deposits and tax-free bonds seem to be among the most favoured financial investments for the political leaders fighting the Lok Sabha polls, while mutual funds and stocks also adorn the portfolios of many and some even have got shares of long-defunct firms like Kingfisher Airlines. 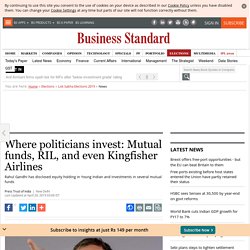 Shares of Mukesh Ambani-led Reliance Industries Ltd (RIL), the country’s most valued company with a market capitalistion of over Rs 8.82 trillion, can be found in the portfolios of several leaders, while stocks and mutual fund units of the firms from younger brother Anil Ambani-led Reliance Group are also a common sight, as per disclosures made in election affidavits of the contestants. However, some top leaders including Prime Minister Narendra Modi have no stock market or mutual fund exposure at all and their financial savings are limited to deposits in banks, tax-free bonds, insurance policies and instruments like National Savings Certificate. 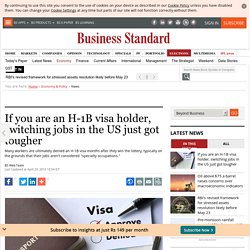 According to a report in Times of India, the US citizenship and Immigration Services ( USCIS) has denied several applications by the new employer by citing that the new position does not constitute a 'specialty occupation.' Moreover, if the H-1B holders starts working elsewhere and the transfer is denied, the person could be 'out of status' with a bar on entry into the US for three to ten years, unless the old employer is willing to take back the worker. “Typically, there is no grace period if the H-1B status has already expired by the time the denial intimation is received. So what exactly is a specialty occupation? Sundaram Ravi only Indian among 22 match officials named for World Cup. Three World Cup winners and one Indian umpire in Sundaram Ravi were Friday named among the 22 match officials for the league stage of the mega event beginning on May 30 in the United Kingdom. 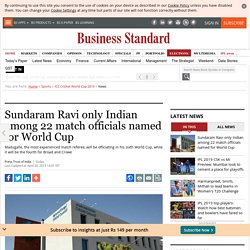 Sixteen umpires and six match referees have been finalised for the 48-match tournament, the International Cricket Council (ICC) announced. Ravi once again will be the only Indian officiating in the tournament. He had recently received a barrage of criticism, including from India captain Virat Kohli, for failing to spot a no-ball from Sri Lanka pacer Lasith Malinga in an IPL game last month. The opening match between hosts England and South Africa at The Oval will see three World Cup winners officiating. David Boon will be the match referee, Kumar Dharmasena one of the two on-field umpires and Paul Reiffel the third umpire. Bruce Oxenford will be the other on-field umpire and Joel Wilson the fourth official for the match. 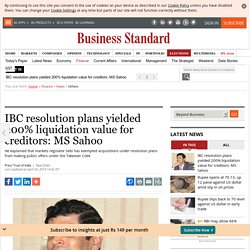 "They are realising, on an average, 45 per cent of their claims through resolutions plans under the Corporate Insolvency Resolution Process (CIRP), which takes on average 300 days and entails a cost on average of 0.5 per cent. "This is significantly better as compared to the previous regime which yielded a recovery of 25 per cent for creditors through a process which took about five years and entailed a cost of 9 per cent," Sahoo was quoted as saying in a Ficci statement.

Addressing a conference on Insolvency and Bankruptcy Code (IBC) at Hong Kong on Thursday, he observed that "in addition to rescuing viable firms, which is the sole objective of IBC; resolution plans under IBC have yielded 200 per cent of liquidation value for creditors. " "Through the process of resolution, the ownership often shifts to third parties.

Travelling to a malaria endemic area? Some simple steps to keep you safe. Every death from malaria is a tragedy. But many infections can be prevented. This is particularly true for holidaymakers, travellers, or people visiting their families in malaria endemic areas. Game of Thrones: Piracy 'better than Emmy' for HBO as it battles Netflix. Eight years after the first season premiered, the long-awaited winter has finally come – Game of Thrones’ final season is here. The television series created by David Benioff and Daniel Brett Weiss from the books by George RR Martin has built a rich and complex multi-thread plot-knot of epic battles, of the living and the undead, of long owed-debts to be paid, and of the culmination of clan stratagems to win the Iron Throne of the Seven Kingdoms. But at the end of season seven in the autumn of 2017, it wasn’t the clan warfare that had us cliffhanging, but the thought of the army of undead white walkers and their zombie dragon bearing down on Westeros.

Beware of bots: Automation could wipe out almost half of all jobs in 20 yrs. Automation, robots and globalisation are rapidly changing the workplace and governments must act fast and decisively to counter the effects or face a worsening of social and economic tensions, the OECD warned. Almost half of all jobs could be wiped out or radically altered in the next two decades due to automation, the Paris-based group said in a report on Tuesday. According to OECD Labor Director Stefano Scarpetta, the pace of change will be “startling.” Safety nets and training systems built up over decades to protect workers are struggling to keep up with the “megatrends” changing the nature of work, the OECD said. While some workers will benefit as technology opens new markets and increases productivity, young, low-skilled, part-time and gig-economy workers are vulnerable. “Deep and rapid structural changes are on the horizon, bringing with them major new opportunities but also greater uncertainty among those who are not well equipped to grasp them,” Scarpetta said.

Why Spotify is removing all the tracks by India's oldest record label. Music streaming service Spotify Technology SA said it will remove all songs belonging to one of India's oldest record labels from its app after they failed to agree on licensing terms, months after the Swedish company's launch in the country. According to a court document, Saregama India Ltd filed a petition with the Delhi High Court seeking an injunction against Spotify to stop it from using its songs. The move comes two months after Spotify launched in India, a price sensitive market already crowded by well-funded players like JioSaavn and Apple Music. According to the court document dated April 23, Spotify's senior counsel said the streaming service would remove all Saregama songs from its app within 10 days.

Jio races ahead of Airtel to become India's 2nd largest telecom company. WHO says maximum one-hour screen time per day for kids under 5: Key points. Young children should not spend more than an hour a day watching television and videos or playing computer games and infants less than one year old should not be exposed to electronic screens at all, the World Health Organization (WHO) said on Wednesday. Limiting, and in some cases eliminating, screen time for children under the age of 5 will result in healthier adults, said WHO, adding that quality sedentary time spent in interactive non-screen-based activities with a caregiver, such as reading, storytelling, singing and puzzles, is very important for child development. Taking away iPads and other electronic devices is only part of the solution. File your I-T return on time or you may end up in jail like this jeweller. As 5G rollout nears, the unending debate over health effects is back. Affordable access to the fourth generation of wireless communication, or 4G, has had us hooked to our phones for a large part of the day.

2014 vs 2019: Here's a look at how political advertising shapes in LS polls. OnePlus 6T on sale for the first time today: How to get it for Rs 33,499. Imran Khan sees better chance of India-Pak peace talks if Modi wins polls. Business Standard. Cold plasma shows potential to kill 99.9% of airborne viruses: Study. In a first, Google drone will start deliveries of takeaways in Australia.

Here's how you can trade TCS, Infosys, Wipro, HCL Tech ahead of Q4 results. SBI buys loans worth Rs 27,000 cr from non-banking financial cos in FY19. How welfare politics in US has inspired ideas in Congress, BJP manifestos. Facebook makes strides against online abuses ahead of Lok Sabha polls. Polling booth for least voters and one at highest altitude, Leh has it all.