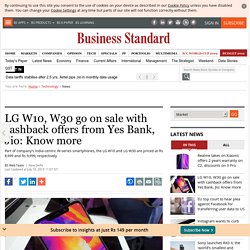 Part of the company’s India-centric W-series smartphones, the LG W10 and LG W30 are priced at Rs 8,999 and Rs 9,999, respectively. The LG W10 comes in tulip purple and smoky grey colours. The LG W30 comes in thunder blue, platinum grey and aurora green colours. As a part of the launch offers, both devices have a 10 per cent instant cashback on equated monthly instalment (EMI) transaction made through Yes Bank credit cards. ICC CWC 2019: What if match is washed out? India will still make the finals. After the rain interruption on Tuesday, the forecast for Wednesday doesn't look too good either, as there are chances of showers in patches even as India and New Zealand look to resume their battle in the first semi-final of the 2019 World Cup at Old Trafford. 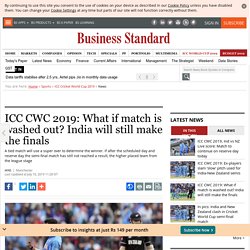 But it is advantage India if play is indeed washed off again on the reserve day. As per the rain rules of the International Cricket Council for the semi-finals and final, if there is no result on the scheduled match day, play will continue on the reserve day, using the same start time and hours of play as the scheduled match day. The reserve day will be a continuation not a restart. Indian Army organises commemorative trek to mark 20 years of Kargil war. The 20th anniversary of the Kargil War was celebrated in a grand manner by the Indian Army with a commemorative trek to Khalubar. 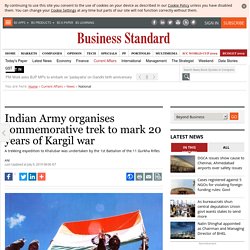 Army said that the year 2019 witnesses the 20th anniversary of the Kargil War and this important milestone was celebrated in a grand manner by the Indian Army with a view to rekindle the pride and valour of all the gallant soldiers who took part in Operation Vijay. One of the severest battles fought during the Kargil War was the Battle of Khalubar in the Batalik Sector. HIV test compulsory before marriage? Goa is considering, says health min. Sony launches RX0 II, the 'world's smallest and lightest' premium camera. Sony has launched RX0 II, the "world's smallest and lightest premium compact camera" with a slew of features for vloggers and travellers, said the company on Monday. 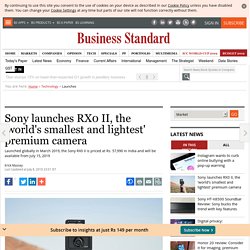 RX0 II is the successor to the Sony RX0 Action Camera that was launched in February, 2018. Virat, Kane's journey from U19 WC to CWC 2019 is inspirational for youth. India skipper Virat Kohli calls Kane Williamson special and the New Zealand skipper says his Indian counterpart is a superstar. 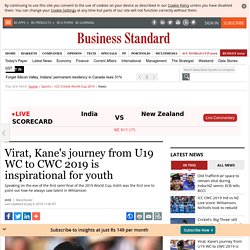 In the modern era of cut throat competition where every inch counts, the mutual admiration that Kohli and Williamson share is indeed a lesson for youngsters looking to play the gentlemans game. Speaking on the eve of the first semi-final of the 2019 World Cup, Kohli was the first one to point out how he always saw talent in Williamson. In fact, even as scribes asked him about playing against Williamson in the U19 World Cup in 2008, the India skipper went back to the 2007 U19 Test match he played against New Zealand to recollect his first memory of the Kiwi skipper.

Another washout? Weather may play spoilsport in IND vs NZ semi-final. A spirited India cricket team would go all guns blazing against and unstable yet dangerous New Zealand cricket team in the first semi-final of the ICC World Cup 2019 at the Old Trafford in Manchester on Tuesday. 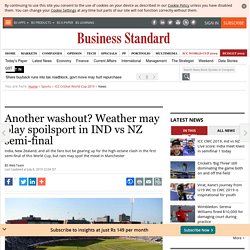 As these two sides collide at the Old Trafford, weather could play a spoilsport in first semi-final as chances of some odd light showers are high in Manchester on Tuesday, July 11. The league match between India and New Zealand at Trent Bridge, Nottingham on June 13 was washed out and both teams shared a point each. However, both teams can heave a sigh of relief as reserve day can come into play just in case there is a washout in Manchester. So far cultured meat has been burgers; next challenge is animal-free steaks. The meat you eat, if you’re a carnivore, comes from animal muscles. 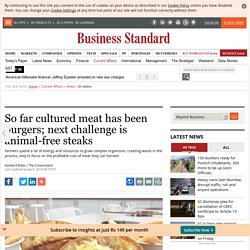 But animals are composed of a lot more than just muscle. They have organs and bones that most Americans do not consume. They require food, water, space and social connections. They produce waste. Farmers spend a lot of energy and resources to grow complex organisms, creating waste in the process, only to focus on the profitable cuts of meat they can harvest. Honor 20 review: Consider it for imaging, premium design, sleek performance.

Even as Chinese smartphone manufacturer Huawei has been in the middle of a crisis because of an ongoing tussle with the US administration, its sub-brand Honor recently introduced the Honor 20-series in India. 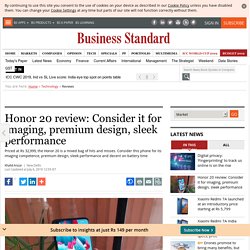 The smartphones in the series – the Honor 20 Pro, Honor 20 and Honor 20i (review) – were lopoked at with some doubt at the time, especially as there were questions over the phones’ future software and security updates from Google. Addressing the concern, Honor issued a statement and assured that the phones would indeed receive Android Q and security updates. Also, the US administration recently softened its position on the matter and allowed Google to license Android to Huawei. Digital privacy: 'Fingerprinting' to track us online is on the rise. If there’s one lesson to learn about digital privacy, it’s that we can never grow complacent. 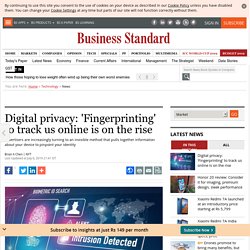 Even if we secure our data so we are not tracked online, the ad tech industry will find ways to monitor our digital activities. And so it is with the rise of so-called fingerprinting, which security researchers are calling a next-generation tracking technology. What is it exactly? Fingerprinting involves looking at the many characteristics of your mobile device or computer, like the screen resolution, operating system and model, and triangulating this information to pinpoint and follow you as you browse the web and use apps. Once enough device characteristics are known, the theory goes, the data can be assembled into a profile that helps identify you the way a fingerprint would. Indian Navy Sailor recruitment 2019: Jobs open for 2,700 posts! Apply now. The Indian Navy has activated the online application process for recruitment of Sailors for Artificer Apprentice (AA) and Senior Secondary Recruits (SSR) for the batch commencing February 2020. 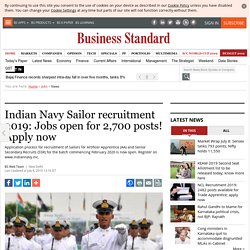 Interested candidates can apply for the post by visiting the official website of the Indian Navy, or clicking here for the direct link. Budget 2019: India won't become a superpower with these allocations. Traditionally, India’s finance minister carries the annual budget to Parliament in an old-fashioned briefcase; photographs of him holding the briefcase up are usually splashed across the front pages the next day.

Among key announcement, Sitharaman said the government will launch an inter-opearable ATM-like One Nation One Card for pan-India travel, new rental laws for affordable housing, interest subvention scheme for MSMEs and women. Here's what Finance Minister Nirmala Sitharaman said in her Budget 2019 speech: The recent election which brought us to this august House today, was charged with brimming hope and desire for a bright and stable New India. Like never before, India celebrated its democracy by coming out to vote in large numbers, like never before. Economic Survey warns of aging population, says retirement age should rise. Railways seeks private players, plans Rs 50 trillion investments: Budget. Indian Railways will need Rs 50-trillion investments between 2018 and 2030 to improve infrastructure, said Finance Minister Nirmala Sitharaman on Friday, indicating private participation in a sector that’s the largest state employer. "Railways will be encouraged to invest in suburban railways through special purpose vehicles (SPVs) and enhance metro rail network through PPPs," she said in her Budget speech in Parliament.

"The new model tenancy, which is likely to be re-introduced, is expected to balance the rights and responsibilities of landlords and tenants and will make the rental market more efficient and streamlined across the country," said Megha Maan, senior associate director, research at Colliers International India. In water-stressed India, govt may push farmers towards efficient irrigation. India should provide incentives to farmers to adopt efficient water use to avert a looming crisis, according to the Economic Survey presented by Finance Minister Nirmala Sitharaman in parliament. The South Asian nation should introduce improved irrigation methods, use technologies and change cropping patterns to reduce the use of ground water, of which 89% is extracted for irrigation purposes, the survey said on Thursday. India is one of the world’s biggest users of ground water and its depleting levels are the main reason for the country’s severe shortages.

About 600 million Indians are facing high-to-extreme water stress and the situation is set to worsen as water requirements rise, according to a 2018 report by NITI Aayog, the government’s policy making body. About 75% of the households in the country do not have drinking water, it said. Budget wishlist: Scrap recycling sector seeks cut in import duty, GST. The metal recycling industry has urged the government pare the import duty on metallic scrap, its sole raw material, to nil from the existing 2.5-5 per cent. It also wants a reduction in goods and services tax (GST) to five per cent from the existing 18 per cent, in order to provide a level playing field with domestic primary metal producers who enjoy duty-free import of finished products under the Free Trade Agreement (FTA) with various countries.

In a pre-Budget submission to Union Finance Minister Nirmala Sitharaman, the apex industry body, Metal Recycling Association of India (MRAI) president Sanjay Mehta, said, "Since India doesn't generate enough metal scrap, the demand for the same has to be met through import. Most countries in the world Sri Lanka, Nepal, Thailand, Malaysia, Indonesia, Japan etc. have reduced import duty on imported scrap to nil. Budget 2019: The toughest balancing act for India's new finance minister. India’s first female finance minister in almost five decades, Nirmala Sitharaman, has held a wide range of jobs: She rode aboard a fighter jet as defense minister. As head of the trade department she grappled with falling exports. Budget likely to raise military spending slightly, delaying modernisation. The government is likely to stick to a modest rise in defence spending in the 2019/2020 budget due on Friday because of government finances, officials said, further delaying a long-planned military modernisation programme.

India's air force desperately needs hundreds of combat planes and helicopters to replace its Soviet-era aircraft while the navy has long planned for a dozen submarines to counter the expanding presence of the Chinese navy in the Indian Ocean. Budget 2019: Govt may cut taxes on biz, hike spending for economic growth. Prime Minister Narendra Modi's government on Friday will unveil a budget that is expected to cut taxes on business and raise spending in a bid to shore up consumption and faltering economic growth.

Analysts say Modi, boosted by a sweeping election victory, hopes to use the budget to restart reforms and deal with a series of economic woes. Budget 2019: After election, it's Modi's key chance to spur waning economy. Prime Minister Narendra Modi has his first chance since a decisive election win to spur an economy that’s quickly lost its status as the world’s fastest-growing major one. Shakib scripts history; first player to score 500 runs,bag 10 wickets in WC. 29-minute grocery delivery: Hot money is flooding fresh-food operators. Nobody likes a big grocery bill. How total solar eclipses reveal the dark side of the sun we never see.

Vivo Z1Pro is a power-packed proposition in midrange segment: Price, specs. Chinese smartphone manufacturer Vivo on Wednesday introduced in India the Z-series smartphone with the launch of the Vivo Z1Pro. Omitted from WC squad, Ambati Rayudu retires from all forms of cricket. Ignored for the ongoing World Cup, Indian middle-order batsman Ambati Rayudu has decided to retire from all forms of cricket, a BCCI official has revealed.

In a first, Starbucks to begin trial of reusable cups at London Airport.