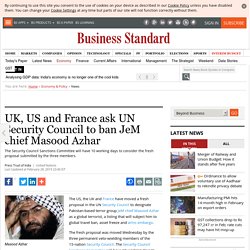 The fresh proposal was moved Wednesday by the three permanent veto-wielding members of the 15-nation Security Council. The Security Council Sanctions Committee will have 10 working days to consider the fresh proposal submitted by the three members. The proposal is the fourth such bid at the UN in the last 10 years to list Azhar as a global terrorist. In 2009, India moved a proposal to designate Azhar, whose UN-proscribed Jaish-e-Mohammed (JeM) claimed responsibility for the suicide attack against Indian security forces in Pulwama on February 14 in which over 40 Central Reserve Police Force (CRPF) personnel were killed. In 2017, the P3 nations moved a similar proposal again. Banks oppose RCom's proposal to use tax refunds to pay Ericsson dues. The troubles for Anil Ambani-led Reliance Communications (RCom) seem to be compounding as the company’s financial creditors, including the State Bank of India (SBI), have opposed its bid to withdraw tax refunds lying in a bank account. 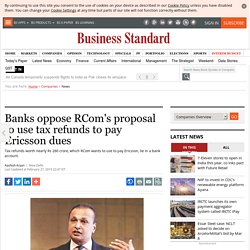 Nearly 44 banks, including SBI are trustees of the bank account in which RCom’s tax refunds worth nearly Rs 260 crore lie. RCom wants to use these refunds to clear Ericsson India’s Rs 453 crore dues. The banks have, however, opposed RCom’s plea and said that the money due to Ericsson should come from an independent source and not from these refunds. Jet Airways grounds more planes, flights cancelled, pilots call off strike. Crisis-hit Jet Airways Ltd said on Wednesday it grounded seven more aircraft as the carrier failed to make payments to its lessors, taking the tally of planes hamstrung by the defaults to 13 this month. 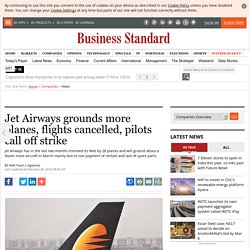 With debts of more than $1 billion, Jet has defaulted on loans and has not paid pilots, leasing firms and suppliers for months.The loss-making Indian airline approved a rescue deal in mid-February after months of talks to plug an 85 billion rupee ($1.2 billion) funding hole.The plan, which has also been approved by Jet shareholders, includes selling a majority stake to a consortium led by State Bank of India, the airline's biggest creditor, at 1 rupee. Mukesh Ambani's plans to take on Amazon and Walmart hit a legal firewall. There’s a wrinkle in plans made by Asia’s richest man to take on Amazon.com Inc and Walmart Inc on his home turf in India: his telecom and retail businesses can’t share data. 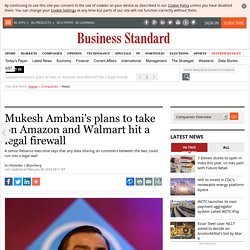 Billionaire Mukesh Ambani, chairman of Reliance Industries Ltd., has outlined how he will marry the might of his group’s 9,900-plus retail stores and 280-million strong telecom user base to bolster his e-commerce venture. A senior Reliance executive says that any data sharing on customers between the two, could run into a legal wall. “They are different companies so there are data privacy rules,” Ashwin Khasgiwala, Reliance Retail Ltd.’s chief financial officer said at a conference in Mumbai on Tuesday. How will Indian economy do in 2019? 'Animal spirits' hint to a tame start. 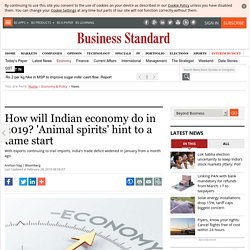 A set of indicators tracked by Bloomberg to measure “animal spirits” -- a term coined by British economist John Maynard Keynes to refer to investors’ confidence in taking action -- showed weaker indicators outnumber stronger ones 4-3 in January. A pullback in exports and business activity weighed on sentiment. While India’s inflation-targeting central bank cut interest rates earlier this month to prop up economic growth, Governor Shaktikanta Das kept the door open for more when he noted that “growth impulses have weakened and there is a need to spur private investment and strengthen private consumption.” While a rates review is scheduled for April, a pulse check for the economy is due later Thursday, when the government will release gross domestic product data for the quarter ended December. Finance Ministry asks direct tax code panel to revise existing I-T slabs. The finance ministry has asked the direct tax code (DTC) panel to revise the existing income-tax (I-T) slabs, especially in the 20 per cent bracket, said a senior government official privy to the development. 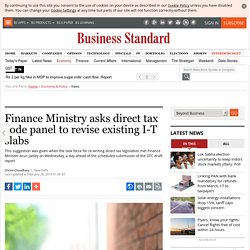 The panel has sought three months to incorporate the suggestions. This suggestion was given when the task force for re-writing direct tax legislation met Finance Minister Arun Jaitley on Wednesday, a day ahead of the scheduled submission of the DTC draft report. “The current tax rates are ambiguous in nature, especially the lower slabs. Pak aircraft shot down, India seeks immediate return of captured IAF pilot. An Indian Air Force (IAF) officer was captured on Wednesday by Pakistan, which paraded him as a virtual prisoner of war, robbing some of the sheen of a spectacular aerial strike on the Jaish-e-Mohammad’s biggest training camp deep inside the neighbouring country a day earlier. 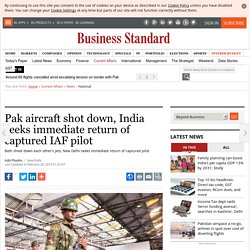 Pakistan had made light of the IAF action on Tuesday, but retaliated on Wednesday — first by unremitting gunfire across the Line of Control (LoC) in Jammu and Kashmir and then sending fighter jets into Indian territory, targeting military installations. However, “in that aerial engagement, one Pakistan Air Force fighter aircraft was shot down by a MiG 21 Bison of the Indian Air Force.

The Pakistani aircraft was seen by ground forces falling from the sky on the Pakistan side”, Raveesh Kumar, spokesman for the government, said in a statement. Lok Sabha Elections: Twitter plans to liaise with EC, boost hiring in India. Twitter Inc plans to boost hiring in India and appoint an officer to liaise with the Election Commission (EC), a senior executive said on Tuesday, responding to concerns about political misuse of social media ahead of this year’s general elections. 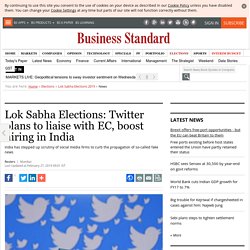 Speaking a day after an Indian parliamentary committee told the company to engage more with the Election Commission to help ensure a free and fair vote, Twitter’s global head of public policy, Colin Crowell, told Reuters the election was a top priority for the company. Govt must ensure early 5G rollout, make spectrum available at reasonable pricing: Sunil Mittal. Bharti Airtel Chairman Sunil Mittal Tuesday said the government must encourage 5G rollout in the country at the earliest by supporting the telecom sector in terms of pricing of spectrum at reasonable levels and lowering various levies. 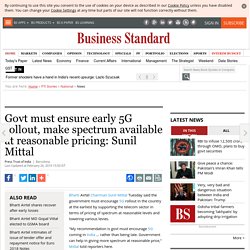 "My recommendation is govt must encourage 5G coming in India ... rather than being late. Government can help in giving more spectrum at reasonable price," Mittal told reporters here. He said the telecom regulator Trai-recommended price is very high, as for 5G every operator will require over 100 megahertz. India-Pak tension sees Sensex slip 466 pts from day's high; ends at 35,905. PM Modi says India is in safe hands after IAF strikes JeM camp in Balakot. Hours after Indian Air Force (IAF) fighter jets bombed Jaish-e-Mohammed’s training camp in Pakistan, Prime Minister Narendra Modi made no effort to hide the fact that he and his government were taking political credit for the strikes. 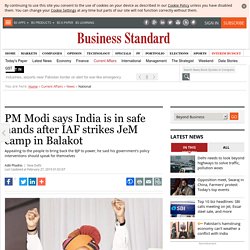 “Aaj aapkamijazkucchaur lag raha hai (you seem to be in a somewhat different mood),” he told the audience while speaking at a rally in Rajasthan’s Churu on Tuesday. ALSO READ: Indian Air Force strikes Jaish-e-Mohammad terror camps in Pakistan After calls of Bharat Mata ki jai, Modi said “you can rest assured, this country is in safe hands” and then folded his hands. “I pledge upon this sacred soil, I will not let the country die, I will not allow the country to be stopped, I will not let the country bow its head. Imran Khan asks Pak to be ready for 'all eventualities' after India strikes.

India said its fighter jets destroyed a major terrorist camp in Pakistan in the worst escalation between the nuclear-armed rivals since 2001, in an incident that Islamabad has described as a "grave aggression. " More than 300 people were killed in the air strikes at the camp belonging to terrorist group Jaish-e-Mohammed that has trained suicide bombers, according to an Indian official speaking on condition of anonymity. Pakistan Prime Minister Imran Khan has directed the armed forces and citizens to "remain prepared for all eventualities. " A statement released from his office today notes Pakistan would respond "at the time and place of its choosing," and rejects India’s claim that it had hit a terror camp or inflicted heavy casualties.

Earlier, the regulator had last week taken a similar action against the commodity arm of leading equity brokers Motilal Oswal Financial Services and India Infoline. Fiscal deficit touches 121.5% of full-year target at Rs 7.70 trn in Jan. Fiscal deficit touched 121.5 per cent of the full-year revised target of Rs 6.34 lakh crore at the end of January on account of lower revenue collections, government data showed on Tuesday. The fiscal deficit, or the gap between the government's expenditure and revenue, stood at Rs 7.70 lakh crore during April-January of the current financial year ending March. At the end of January 2018, the deficit was 113.7 per cent of the Revised Estimate (RE). The government had budgeted to cut the fiscal deficit to 3.3 per cent of GDP or Rs 6.24 lakh crore in 2018-19, from 3.53 per cent in the previous financial year. However, in the Interim Budget 2019-20, the fiscal deficit was revised upwards marginally to 3.4 per cent of GDP or over Rs 6.34 lakh crore, on account of additional outlay of Rs 20,000 crore for funding income scheme for small farmers.

According to RE, the government expects to mop up Rs 17.29 lakh crore revenue during the current fiscal, from Rs 17.25 lakh crore budgeted originally. MARKET WRAP: Sensex slips 240 points as IAF strikes Pakistan terror camps. IAF strike in Balakot LIVE: Series of ceasefire violations by Pakistan. Indian Air Force strikes Jaish-e-Mohammad terror camps in Pakistan. Indian fighter jets struck the biggest training camp of the Jaish-e-Mohammad (JeM) inside Pakistan in a pre-dawn operation on Tuesday, killing over 300 terrorists. The synchronised strike, involving 12 Mirage 2000 aircraft and supported by a fleet of Sukhoi 30 jets, a mid-air refueller and two airborne warning and control systems, targeted JeM’s “five-star resort style” camp on a hilltop in Balakot, about 80 km from the Line of Control, sources said. The entire operation lasted about 20 minutes, and came days after the February 14 suicide bombing of a convoy of the Central Reserve Police Force (CRPF) in Jammu and Kashmir’s Pulwama in which 40 troopers were killed.

The JeM had claimed responsibility for the Pulwama attack. Hours after the IAF’s operation, India’s foreign secretary, Vijay Gokhale, said this was an “absolutely necessary” attack on the proscribed terrorist group, which was readying for a major terrorist strike in India. Trai directs BARC to release TV viewership data for past weeks immediately. Broadcasting regulator Trai has taken a strong view of the Broadcast Audience Research Council (BARC) not publishing rating and viewership data during the sector's migration to the new tariff regime, and directed it to immediately release viewership data for the past weeks on its website, warning of "appropriate action" for non-compliance, a source said.

Etihad conditions may delay debt-laden Jet Airways resolution plan. Modi launches PM-Kisan scheme, transfers Rs 2,021 cr to over 10 mn farmers. SBI considers moving NCLT for insolvency proceedings against Jet Airways. Can Bangladesh beat India in development race? Here's what economists say. Rahul asks Congress CMs to file review petition against tribals' eviction. Congress President Rahul Gandhi has written to chief ministers of states where his party is in power to file review petitions in the Supreme Court against mass-scale evictions of tribals and other forest-dwellers. Top 10 biz headlines: GST relief for realty, Jet resolution plan, and more. 1. EPFO hikes interest rate to 8.65%, move to benefit 170 mn subscribers. The Employees’ Provident Fund Organisation (EPFO) on Thursday approved of an increase in the interest rate on PF deposits to 8.65 per cent for 2018-19 from 8.55 per cent in the previous financial year.

Pulwama attack: India's 200% duty is as good as a ban on Pakistani imports.