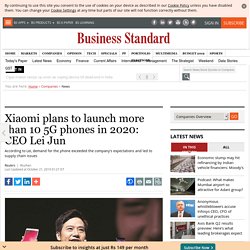 Lei’s remarks come as the company faces intense competition in its home market from rival Huawei Technologies. Last month Xiaomi launched the Xiaomi Mi 9 Pro, the company’s first 5G-enabled phone for the domestic market. According to Lei, demand for the phone exceeded the company’s expectations and led to supply chain issues. Huawei's Honor to launch Android smartphone in India by end of this year.

Chinese smartphone brand Honor is planning to launch Android-based handset in India by the end of this year, despite a ban on its parent firm Huawei for purchase of software and hardware components from US companies. 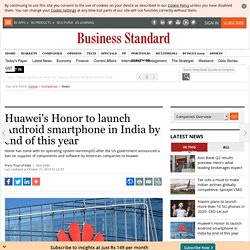 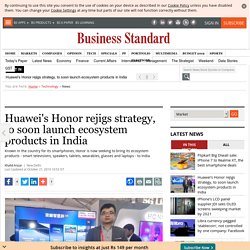 Known in the country for its smartphones, the company now seeks to bring its ecosystem products to India. These products include smart televisions, speakers, tablets, wearables, glasses, laptops, etc. Most of these, already available in China, will be made available in India starting next year. “In India, we aim to create an entire product ecosystem that would include smartphones, televisions, tablets, laptops, watches, glasses, etc,” said Honor India President Charles Peng in an interaction with Business Standard. iPhone's LCD panel supplier JDI sees OLED screens sweeping market by 2021. Maharashtra police ties up with AI firm to prevent spread of fake news. In the run-up to the Maharashtra State Assembly Elections, the Maharashtra Police has tied up with Logically, an extended intelligence (artificial and human intelligence)-powered tech firm, to detect and prevent the spread of fake news. 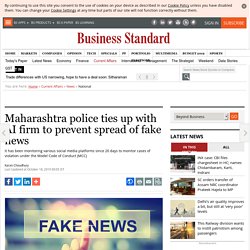 The company helps detects fake news, logical fallacy, and inaccuracies. It has been monitoring various social media platforms since 20 days to monitor cases of violation under the Model Code of Conduct (MCC). These violations are then reported to the Election Commission of India (ECI). “Logically is confident of adding capabilities and capacity to the existing governmental and regulatory processes,” the company said. After evaluating the effectiveness of its collaborative approach during the polls, the company, along with the cyber cell, intends to continue improving its technical approach and scale this POC (Proof of Concept) in tandem with police departments of other states. CCEA may consider govt's stake cut in some PSUs to below 51% next week.

The Cabinet Committee on Economic Affairs (CCEA) is next week expected to take up a proposal to reduce the government’s stake in a number of state-owned companies below 51 per cent. 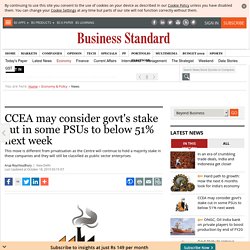 This move is different from privatisation as the Centre will continue to hold a majority stake in these companies and they will still be classified as public sector enterprises. These companies are those in which the Centre already has a stake below 60 per cent, and could include Indian Oil (current government stake of 51.5 per cent), NTPC Ltd (54.50 per cent), Bharat Electronics (58.83 per cent), BEML (54.03 per cent), Engineers India (52 per cent), GAIL India (52.66 per cent), and National Aluminum Co (52 per cent). The stake in these companies will be pared through offers for sale (OFS) on the exchanges. Ahead of the proposal being taken to the CCEA, a group of secretaries is expected to meet on Friday to finalise the Cabinet note. How opportunistic behavior can worsen India's $200 bn-plus bad loan crisis. Snatch-and-grab is the new hallmark of Indian finance. 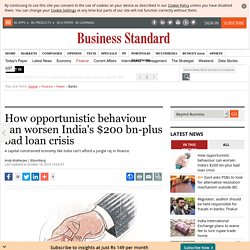 As a banker friend in Mumbai put it to me only half-jokingly, a unit of "grabbed" cash collateral in hand is worth more than two units of hypothetical receivables. Yet this is no laughing matter. Not only is opportunistic behavior going to worsen India’s $200 billion-plus bad loan crisis, but now that everyone from the government’s sleuths to the courts are joining the melee, the ensuing chaos will limit the recovery for lenders and threaten depositors. Rajnish Kumar, chairman of State Bank of India, sat down for a chat with me at the Bloomberg Equality Summit in Mumbai this week. Govt probing Flipkart, Amazon over alleged predatory pricing: Piyush Goyal. 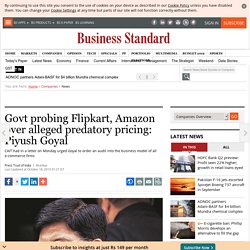 Warning of stringent action as per the law for any violation, he said detailed questionnaires have been sent to these companies and their response is awaited. According to media reports, the e-commerce majors have grossed up over $3 billion in gross merchandise value during the festive sales held over the past fortnight, which typically see over half of their annual sales. Air passenger traffic falls amid slowing economy and lean travel season. Domestic air passenger traffic declined for the fourth consecutive month in September, amid a slowing economy and lean travel season. 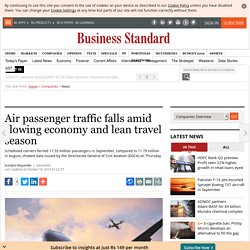 Two years later, as Amtek Auto — one of the Reserve Bank of India’s (RBI’s) dirty dozen — readies for its second run-in with the corporate insolvency resolution process, its creditors are far more cautious and the potential bidders slightly wary. 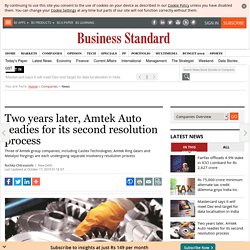 Three of Amtek group companies, including Castex Technologies, Amtek Ring Gears and Metalyst Forgings are each undergoing separate insolvency resolution process. Mastercard says it will meet Dec-end target for data localisation in India. Mastercard is confident of completing its data localisation requirements in India by the end of this year. 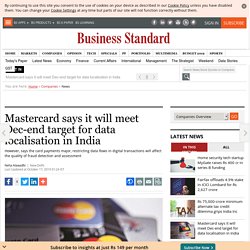 However, says the card payments major, restricting data flows in digital transactions will affect the quality of fraud detection and assessment. “We are totally committed. In fact, we are in full execution mode...And, we remain completely committed to the end of the year (deadline) that we have given to the Reserve Bank of India. So, I don't see a challenge on the question of data localisation," said Ari Sarker, its Asia-Pacific co-president. Infra, realty trusts can set up biz in SEZs. Will this increase exports? The new expanded definition of a “person” who can set up a unit in a special economic zone (SEZ) can help increase the number of exporting units in India and help utilise the full potential of the land in these zones, experts say, though it may not further the SEZs’ basic purpose of increasing the country’s net exports. The Centre amended the Special Economic Zones Act (SEZs Act) in August 2019 to broaden the definition of “person” who can set up their units in these zones.

After the amendment, "trust” or “any entity as may be notified by the Central Government" can set up their operation in SEZs. The bill does not review taxes imposed on units inside SEZs, nor does it address fine-tuning of the policy according to state- and sector-specific requirements, rising dependency on imports, or lack of connectivity and infrastructure, experts pointed out.

Trading houses have contracted to export to Iran about 350,000 tonnes of sugar for shipments landing in October to December at about Rs 21,600 ($302) a tonne on a free-on-board basis, the trade sources said this week. They have contracted another 150,000 tonnes for destinations like Sri Lanka, Afghanistan and African countries at around $315 per tonne for shipments in the last quarter of 2019, they said. India International Exchange plans to waive fee to lure rupee trade home. As India works to bring some of the burgeoning offshore rupee trading back home, the exchange that will likely spearhead the move says it’s prepared to cut trading fees to zero to take on overseas rivals. The India International Exchange (IFSC) Ltd., also known as India INX, plans to waive commissions initially, a strategy it used to bolster liquidity in its equity and gold derivatives contracts.

“We will compete with lowest-cost access,” V. Balasubramaniam, chief executive at the bourse based in the tax-incentive zone in the GIFT City, said in an interview. “For us, the cost of running a market is much lower as manpower and infrastructure costs at the IFSC are small.” Trading charges at the Dubai Gold & Commodities Exchange range from $0.03 to $0.1 per contract, per side on various rupee-related contracts, according to its website. PMC Bank case: Praful Patel used Wadhawans' aircraft eight times, says ED. Trouble is mounting for former Union minister Praful Patel, with the Enforcement Directorate (ED) finding his name on the passenger manifest of an aircraft that belongs to the Wadhawans, HDIL promoters. The documents examined by the ED, which is probing the Rs 4,355-crore Punjab & Maharashtra Co-operative (PMC) Bank loan case, show that Patel used the aircraft multiple times in 2012 when he was civil aviation minister.

The probe agency, in this case, has seized two aircraft — Bombardier Challenger-300 VT and Falcon 2000 VT, owned by Privilege Airways. Rakesh Wadhawan and son Sarang Wadhawan of Housing Development & Infrastructure (HDIL) are directors of Privilege Airways. According to ED sources, Patel had used the aircraft at least eight times in 2012 between February and May. Flipkart forays into original video content, takes on Amazon and Netflix. Walmart-owned e-commerce major Flipkart is foraying into offering original video content with the launch of Flipkart Video Originals.

At Rs 2,299, the smart wearable is slightly expensive than the predecessor, but it brings several upgrades that makes it an interesting preposition in the entry-level smart wearables segment. Sabarimala issue set to decide political fortunes in Kerala yet again. Do the winners of 2019 economics Nobel focus too much on micro welfare? The Royal Swedish Academy of Sciences will award the 2019 Nobel Prize in Economic Sciences to Abhijit Banerjee and Esther Duflo of the Massachusetts Institute of Technology and Michael Kremer of Harvard “for their experimental approach to alleviating global poverty.” SoftBank Group, Ant Financial likely to invest $2 billion in Paytm.

Fintech major Paytm is close to scoring $2 billion of new financing from investors, including Jack Ma's Ant Financial and Japan’s SoftBank Group Corp, to fend off an influx of new rivals, a person familiar with the matter said. The funding will be split evenly between equity and debt and values the country’s top online financial services firm at $16 billion, the person said, asking not to be identified talking about a private deal. The talks are in their final stages but the terms could still change, the person added.

Seven booked by CBI for peddling child pornography on WhatsApp. The Central Bureau of Investigation has booked seven Indians for being part of international WhatsApp groups circulating child sexual abuse content, a probe triggered by the arrest of a group member in Germany, officials said here Monday. The agency has carried out searches at several locations across the country after registering an FIR against seven persons who owned the numbers which were part of the WhatsApp groups, they said. Why strong monsoon rains are not necessarily good news for Indian farmers. India, one of the world's biggest agricultural producers, experienced its heaviest monsoon rains in 25 years this year. While rain would normally cheer the agricultural heartland, the monsoon was erratic and has left many crops damaged.

Trade unions of public sector banks call off two-day nationwide strike. Rising power: Why India has faced muted criticism over its Kashmir policy. Kohli one demerit point away from getting banned from international cricket. Flu-like epidemic could kill 80 mn globally, wipe out 5% global GDP: Report. How're corporation tax cuts going to be financed? Is this helicopter money? Thomas Cook falls: What next for the company that survived two world wars? Here's what India can learn about tax cuts from the American experience. Banking, FMCG to gain from tax cut; pharma, IT to remain untouched: Report. All's well in India, says PM at 'Howdy Modi' rally; Trump hints about visit. Hero Cycles to invest around Rs 1,000 crore in e-cycles business. PhonePe's super-app platform 'Switch', a one stop solution for customers. India registers fastest growth in fish production in more than two decades.