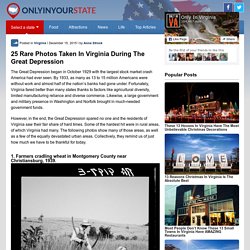 By 1933, as many as 13 to 15 million Americans were without work and almost half of the nation’s banks had gone under. Fortunately, Virginia fared better than many states thanks to factors like agricultural diversity, limited manufacturing reliance and diverse commerce. Likewise, a large government and military presence in Washington and Norfolk brought in much-needed government funds. However, in the end, the Great Depression spared no one and the residents of Virginia saw their fair share of hard times. Interview: Frances Jensen On The Teenage Brain. Research into how the human brain develops helps explain why teens have trouble controlling impulses. 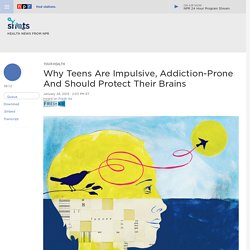 Leigh Wells/Ikon Images/Corbis hide caption toggle caption. How the Sausage Gets Made. Last week, I wrote the following on my Facebook page: Social media is a notoriously difficult place to express any of the hard, nuanced stuff in life, but I'd like to try: I've written or edited or collaborated on five books. 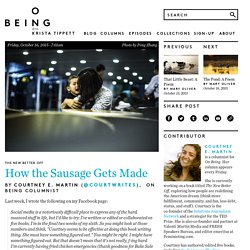 I'm in the final two weeks of my sixth. So you might look at those numbers and think, "Courtney seems to be effective at doing this book writing thing. Teach Kids to Daydream - Jessica Lahey. Today’s children are exhausted, and not just because one in three kids is not getting sufficient sleep. 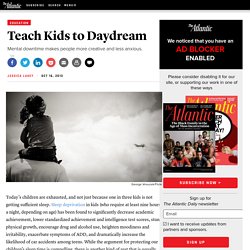 Sleep deprivation in kids (who require at least nine hours a night, depending on age) has been found to significantly decrease academic achievement, lower standardized achievement and intelligence test scores, stunt physical growth, encourage drug and alcohol use, heighten moodiness and irritability, exacerbate symptoms of ADD, and dramatically increase the likelihood of car accidents among teens. While the argument for protecting our children’s sleep time is compelling, there is another kind of rest that is equally underestimated and equally beneficial to our children’s academic, emotional, and creative lives: daydreaming. I’ve been reading about daydreaming extensively lately, and it has caused me regret every time I roused one of my students out of their reverie so they would start working on something “more productive.” Not all mental downtime is alike, of course.

Kids whose time is less structured are better able to meet their own goals. Children who spend more time in less structured activities—from playing outside to reading books to visiting the zoo—are better able to set their own goals and take actions to meet those goals without prodding from adults, according to a new study by the University of Colorado Boulder. 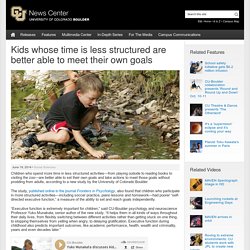 “It helps them in all kinds of ways throughout their daily lives, from flexibly switching between different activities rather than getting stuck on one thing, to stopping themselves from yelling when angry, to delaying gratification. Medicine Bottles For Malawi. Landfills Do Not Need Medicine Bottles! 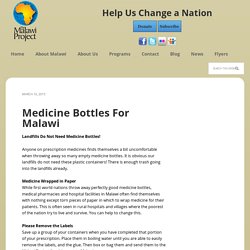 Anyone on prescription medicines finds themselves a bit uncomfortable when throwing away so many empty medicine bottles. It is obvious our landfills do not need these plastic containers! There is enough trash going into the landfills already. Medicine Wrapped in Paper While first world nations throw away perfectly good medicine bottles, medical pharmacies and hospital facilities in Malawi often find themselves with nothing except torn pieces of paper in which to wrap medicine for their patients.

Anxiety in Kids: How to Turn it Around and Protect Them For Life - Hey Sigmund - Karen Young. Anxiety is a normal response to something dangerous or stressful. 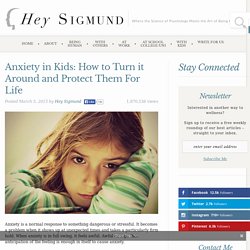 It becomes a problem when it shows up at unexpected times and takes a particularly firm hold. When anxiety is in full swing, it feels awful. Awful enough that anticipation of the feeling is enough in itself to cause anxiety. We already know that anxiety has nothing to do with strength, courage or character. 9 Things Every Parent with an Anxious Child Should Try  Parenting.blogs.nytimes. Photo Where is the doom and gloom? 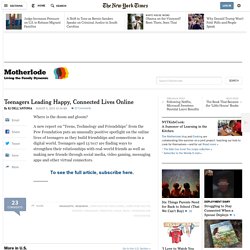 A new report on “Teens, Technology and Friendships” from the Pew Foundation puts an unusually positive spotlight on the online lives of teenagers as they build friendships and connections in a digital world. Teenagers aged 13 to17 are finding ways to strengthen their relationships with real-world friends as well as making new friends through social media, video gaming, messaging apps and other virtual connectors.

The Death of the Hippies. In 1967, just after the Summer of Love, The Atlantic published “The Flowering of the Hippies,” a profile of San Francisco’s new youth culture. 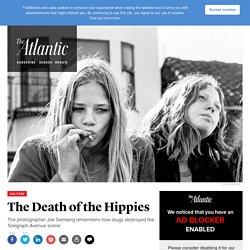 “Almost the first point of interest about the hippies was that they were middle-class American children to the bone,” the author noted. “To citizens inclined to alarm this was the thing most maddening, that these were not Negroes disaffected by color or immigrants by strangeness but boys and girls with white skins from the right side of the economy ... After regular educations, if only they’d want them, they could commute to fine jobs from the suburbs, and own nice houses with bathrooms, where they could shave and wash up.”

How to Make a Skateboard Out of Trash: One artist uses six-gallon buckets pulled from a dumpster to make skateboarding greener. I forgot how to be the happy mom. The other day a friend of mine told me to have fun with my kids. 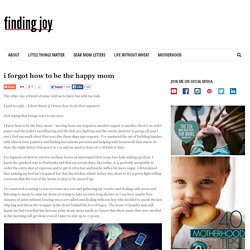 I said in reply – I don’t know if I know how to do that anymore. Just typing that brings tears to my eyes. I know how to be the busy mom – moving from one urgent to another urgent to another there’s no toilet paper and the toilet’s overflowing and the kids are fighting and the smoke detector is going off and I can’t find my math sheet that was due three days ago urgency. How Uncertainty Fuels Anxiety. After nine years writing Slate’s “Dear Prudence” advice column, Emily Yoffe has noticed some recurring themes: “Mothers in law, husbands addicted to porn, impossible officemates, crazy brides.”

Sometimes, Yoffe says, letter-writers say they’re prepared to abide by her advice, whatever it is. “I have people writing to me, saying ‘I thought we wanted three children, but I realized I’m happy with two. My spouse wants another. Learning this One thing Changed My Life. Via Amanda Johnsonon Jun 4, 2015 Why is life so f*cking hard sometimes? Thoughts on 'teaching' reading (and why I don't do it) - Here in the Bonny Glen. May 12, 2015 @ 3:51 pm | Filed under: Comics, Early Childhood Education, Homeschooling, Read-Alouds.

Report debunks ‘earlier is better’ academic instruction for young children. Neil Gaiman: Why our future depends on libraries, reading and daydreaming. Fancy a Cuppa: Cozy Mug Collections. Meaning Changes As Life Unfolds. Does It Matter Which College Your Child Chooses? Probably Not. The Power of 'Good Enough' — The Atlantic. Anxiety in Kids: How to Turn it Around and Protect Them For Life - Hey Sigmund - Karen Young. Street View: New York City's Doors. Roy Colmer/New York Public Library This post is a Special Research Project of NPR History Dept. Between November 1975 and September 1976, a man named Roy Colmer decided to photograph New York City's doors. Not all of New York City's doors. No doors in particular. Why Mornings Don’t Make You Moral.

The Gorgeous Typeface That Drove Men Mad and Sparked a 100-Year Mystery.