Use the resources here as you research about your challenge.

IB World Sept 2016 by International Baccalaureate. The Basics of Ad Design - Drawing In the Viewer. Written by: J. 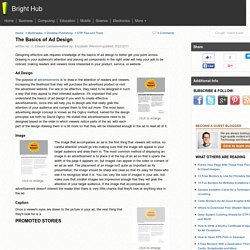 Edward Casteele•edited by: Elizabeth Wistrom•updated: 5/23/2011 Designing effective ads requires knowledge of the basics of ad design to better get your point across. Drawing in your audience's attention and placing ad components in the right order will help your ads to be noticed, making readers and viewers more interested in your product, service, or website. Ad Design The purpose of advertisements is to draw in the attention of readers and viewers, increasing the likelihood that they will purchase the advertised product or visit the advertised website.

Free Online Video Editor and Maker. Free Video Maker Software - Make Animation Online - Try it! 3 Excellent Tools to Create Interactive Posters and Visuals for Your Class. February 1, 2014 Interactive visuals are great learning and teaching materials to use with your students in the classroom. 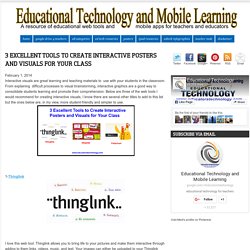 From explaining difficult processes to visual brainstorming, interactive graphics are a good way to consolidate students learning and promote their comprehension. Below are three of the web tools I would recommend for creating interactive visuals, I know there are several other titles to add to this list but the ones below are, in my view, more student-friendly and simpler to use. 1-Thinglink I love this web tool. 2- PiktoChart. 3 Powerful Free Alternatives to PowerPoint and Keynote. Creating engaging presentations and slideshows is an art that requires a lot of creativity and dedication. 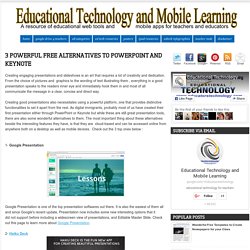 From the choice of pictures and graphics to the wording of text illustrating them , everything in a good presentation speaks to the readers inner eye and immediately hook them in and most of all communicate the message in a clear, concise and direct way. Creating good presentations also necessitates using a powerful platform, one that provides distinctive functionalities to set it apart from the rest. As digital immigrants, probably most of us have created their first presentation either through PowerPoint or Keynote but while these are still great presentation tools, there are also some wonderful alternatives to them.

The most important thing about these alternatives beside the interesting features they have, is that they are cloud-based and can be accessed online from anywhere both on a desktop as well as mobile devices. Check out the 3 top ones below : MAKE BELIEFS COMIX! Online Educational Comic Generator for Kids of All Ages. Characteristics of Social Networks. There are more people than ever before who are fascinated by the characteristics of social networks. 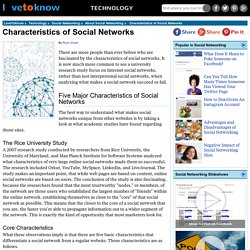 It is now much more common to see a university research study focus on Internet social networks, rather than just interpersonal social networks, when analyzing what makes a social network succeed or fail. Five Major Characteristics of Social Networks The best way to understand what makes social networks unique from other websites is by taking a look at what academic studies have found regarding those sites. The Rice University Study. About Social Community Network Features. Below you will find a list of the typical features of a social community networking site. 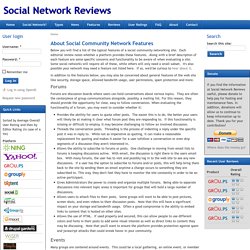 The facilities they provide have allowed them to overtake e-mail as the most potent killer application on the net. New to networking? Use LinkedIn to maximize the student experience. You might be thinking that LinkedIn is just a networking site for business professionals and top-level executives, right? 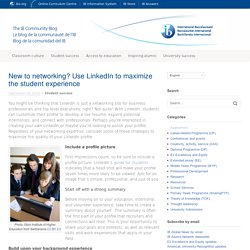 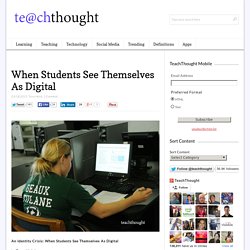 Coldly, and as a matter of “settings,” they are able to dictate when, how, where, and by whom they are seen. Connectivity has closed the walls of the world around them–or at least made them transparent–until they have zero room to wiggle and squirm. And that’s a real problem in an era of big data, digital branding, and always-on expression. Teens, Technology and Friendships. Video games, social media and mobile phones play an integral role in how teens meet and interact with friends This report explores the new contours of friendship in the digital age. 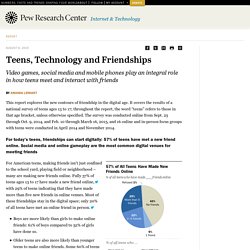 It covers the results of a national survey of teens ages 13 to 17; throughout the report, the word “teens” refers to those in that age bracket, unless otherwise specified. The survey was conducted online from Sept. 25 through Oct. 9, 2014, and Feb. 10 through March 16, 2015, and 16 online and in-person focus groups with teens were conducted in April 2014 and November 2014. #Being13: Teens and social media. "When I get my phone taken away, I feel kind of naked," said Kyla, another 13-year-old. 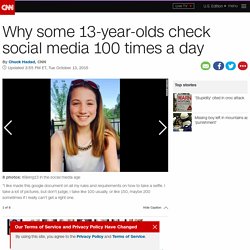 "I do feel kind of empty without my phone. " More than 200 eighth graders from across the country allowed their social media feeds to be studied by child development experts who partnered with CNN. Could a Facebook 'Dislike' button backfire among teens? He said it has been "surprisingly complicated" to come up with the right approach. 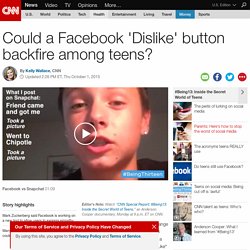 "We didn't want to just build a 'Dislike' button because we don't want to turn Facebook into a forum where people are voting up or down on people's posts," he said during a townhall Q&A at the company's headquarters last month. It's a welcome move to have more than "Like" to show how you feel about someone's tragic news, right? Well, it depends whom you ask. In email conversations with parents and others, there's a great deal of concern that what Facebook ultimately unveils could end up giving users the ability to dislike posts. Why Your Kids Love Snapchat, and Why You Should Let Them. Teen Social Media Infographic from Common Sense Media. Online identity. Internet identity (IID), also online identity or internet persona, is a social identity that an Internet user establishes in online communities and websites.

It can also be considered as an actively constructed presentation of oneself. Although some people choose to use their real names online, some Internet users prefer to be anonymous, identifying themselves by means of pseudonyms, which reveal varying amounts of personally identifiable information. An online identity may even be determined by a user's relationship to a certain social group they are a part of online. Some can even be deceptive about their identity. The concept of the self, and how this is influenced by emerging technologies, are a subject of research in fields such as education, psychology and sociology. On a sunny day, you may get the rainy-day blues from Facebook friends.

LOS ANGELES — Blame your Facebook account if you feel down on a bright, sunny day, according to new research. Too many of your friends may be posting emotionally negative messages. In a paper published Wednesday, scientists argued that the hugely popular social networking site exerts an emotional “spillover” effect. The research may carry significant consequences for an increasingly interconnected world. By analyzing more than a billion Facebook status updates, the authors concluded that emotionally positive posts gave rise to more positive posts by friends. On the other hand, negative posts spawned more negative posts. “It was actually a very large effect. Constant Social Media Presence May Jeopardize Teens' Mental Health.

FRIDAY, Sept. 11, 2015 (HealthDay News) -- Teens who feel a round-the-clock compulsion to participate on social media sites like Facebook or Twitter may pay a price in lost sleep. They may also face a higher risk for depression and anxiety, new research suggests. British researchers surveyed nearly 470 teens to explore how 24/7 social media participation might affect their emotional health.

"Adolescence can be a period of increased vulnerability for the onset of depression and anxiety, and poor sleep quality may contribute to this," said study co-author Heather Cleland Woods, a psychology administration teacher at the University of Glasgow in Scotland. "It is important that we understand how social media use relates to these. " The findings are scheduled for presentation Friday in Manchester, England, at a British Psychological Society meeting.

Approximately 90 percent of teens worldwide use social media, the researchers said in background notes. Teens leading happy connected lives online. Photo Where is the doom and gloom? A new report on “Teens, Technology and Friendships” from the Pew Foundation puts an unusually positive spotlight on the online lives of teenagers as they build friendships and connections in a digital world.

Teenagers aged 13 to17 are finding ways to strengthen their relationships with real-world friends as well as making new friends through social media, video gaming, messaging apps and other virtual connectors. This is not the usual story of teenagers in the online realm. Safer Internet Day 2015: Parents say social media a mixed blessing for kids.