Hundreds of Ways to Get S#!+ Done—and We Still Don’t. How to meet your deadlines: tips from deadline expert Christopher Cox. Time Management Won’t Save You. Don't Fall for the Self-Sabotaging Excuse: "That Won't Work for Me" I’ll offer another example. 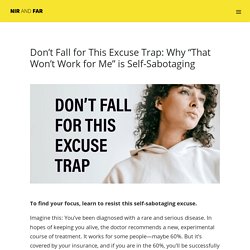 Let’s say your teenage daughter wants to play basketball with a competitive local team, but she feels unsure about trying out because she’s not especially tall. Only half of the players at tryouts will make the team, and the tryouts are in three months. What advice do you give your daughter? You’ll probably tell her something like, “For the next three months, get out there and practice every day. Then, do your very best at the tryouts. You’ll say this to her because you know that even though not everyone will make the team, everyone who wants to be on the team should try out.

I know people who complain all day long that they don’t have enough time and yet immediately dismiss the time-management methods that work for the majority of people, convinced they’ll be part of the minority. In addition to being a self-sabotaging mental barrier, this is just faulty logic. Don’t fall for this excuse trap. Smartphone Too Distracting? Here’s How to Reclaim Your Focus. Unfortunately, few people do that. 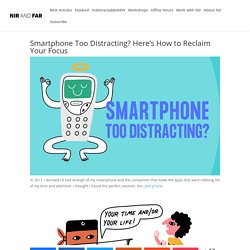 Google and Apple have made it unnecessarily difficult to adjust these settings. According to Adam Marchick, CEO of mobile marketing company Kahuna, less than 15 percent of smartphone users adjust their notification settings—meaning the remaining 85 percent allow app makers to interrupt them whenever they’d like. It’s up to us to make adjustments to suit our needs, not theirs.

But which app notifications should we disable and how do we do it? Email Etiquette: How to Ask People for Things and Actually Get a Response. If writing a letter a hundred years ago was the equivalent of sitting down with someone in a quiet room and talking face-to-face, writing an email today is like yelling at someone across a noisy intersection while they’re rushing to an appointment. 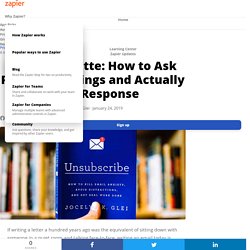 Everyone is overloaded and overbusy. Everyone is overloaded and overbusy. We exist in a state of continuous partial attention as we shift nimbly back and forth between email, text messages, social media, and the web. The email you send isn’t just competing with other email for someone’s attention; it’s competing with everything. Odds are, your email will be read on a phone, as are over 50 percent of emails. That means your email will most likely be digested in a quick glance while the receiver is on their phone, flitting back and forth between other tasks. Our information-addled brains demand a new approach to email. Timeboxing: A simple & powerful technique to improve your productivity.

An example how to productively organize your calendar with the timeboxing technique. 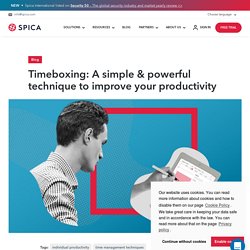 Use timeboxing to start a task you procrastinated on Sometimes you have to do a task you really don’t like or procrastinate on for some other reason. Timeboxing can help you with that. There is one very interesting (and sometimes beneficial) psychological phenomenon we humans have, which is that you want to finish an activity after you start it. Google's Top Productivity Expert, Laura Mae Martin, Says This Is How You Should Spend Your Day. Why you should stop focusing on productivity.

5 Strategies for Getting More Work Done in Less Time. Productivity Skills to Help You Gain Time Back. Procrastinate Much? Manage Your Emotions, Not Your Time. In the early 1980s, Douglas Adams was struggling to make progress on the fourth installment in his beloved series, “The Hitchhiker’s Guide to the Galaxy.” 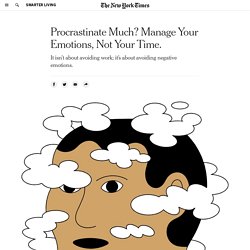 The great sci-fi humorist had learned from writing the previous books that good ideas usually came to him in the bath, so he would spend his mornings soaking in the tub until he had a eureka moment. Then he would get out to start writing, only to forget the idea while getting dressed, which meant he had no choice but to head right back to the tub. After many months of failing to make progress, Mr. Adams scheduled a solo writing retreat for several weeks at a country manor. Unfortunately, he ended up befriending the hosts, and he spent most of the trip drinking wine. If there was a world championship of procrastination, some of the top contenders every year would be writers. How to Focus on What’s Important, Not Just What’s Urgent. Productivity Skills to Help You Gain Time Back. Your To-Do List Is, in Fact, Too Long. To Achieve Big Goals, Start with Small Habits. Best Free Schedule Maker Tool + Productivity Guide by Expert. April once struggled with her schedule, or the lack thereof. 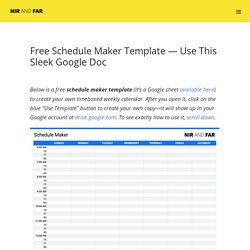 She works in ad sales at a large tech company in Manhattan. She used to hit her aggressive sales quotas year after year, but not anymore. The days of calmly and confidently representing her company and products were gone and so was fostering deep relationships with her clients. Instead, her friendly disposition had turned bitter. The mounting pressures to sell more and do more in pursuit of a management role had taken their toll. Those pressures infected April’s schedule. 9 Ways to Say No to Busywork and Unrealistic Deadlines. How to Stay Focused If You’re Assigned to Multiple Projects at Once. How to Deal with Constantly Feeling Overwhelmed. Why We Procrastinate When We Have Long Deadlines. What Super Productive People Do Differently. 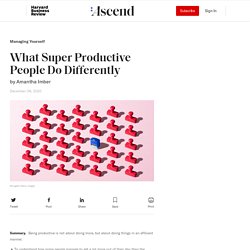 To understand how some people manage to get a lot more out of their day than the average person, Amantha Imber interviewed them... In 2018, I came across a meme that was going viral on the Internet. It read, “You have the same number of hours in the day as Beyoncé.” I doubt that anyone became more productive or achieved greater heights as a result of these words, but it made me wonder: Do high achievers approach their days and their work differently than most people? How do they become so efficient and productive? What to Do When You’re Feeling Distracted at Work. The Two Things Killing Your Ability to Focus. How to Get Your To-Do List Done When You’re Always in Meetings.

How to Focus on What’s Important, Not Just What’s Urgent. Research: Knowledge Workers Are More Productive from Home. You Have to Stop Canceling and Rescheduling Things. Really. Welcome - Time Management Fundamentals Video Tutorial. Why You Need an Untouchable Day Every Week. Want to Be More Productive? Try Doing Less. Are You Having Trouble Focusing? These Simple Strategies Will Help. 20+ Productivity Apps for College Students and Young Professionals. As a college student, you balance classes, homework, extra curricular activities, job applications, internships, and (if you're lucky) a few side projects. 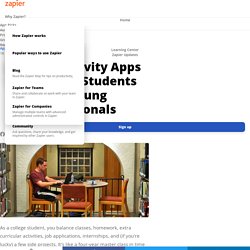 It's like a four-year master class in time management. At least that's my experience: I'm finishing up a major in philosophy at Carnegie Mellon University, while devoting time to an internship, an online course teaching marketers technical skills, and a campus professional development program. And somehow, I scrape together hours to have fun on the weekends too. The time I do find at week's end exists in part thanks to the web and mobile apps that help me be more productive.

I use tools like Evernote for organizing class notes, RescueTime for increasing focus, and WhenIsGood for finding meeting times. Ed. note: This post has been updated to reflect the included apps' more recent details. The Best Apps for Taking and Reviewing Notes As a college student, you're going to be taking hundreds of pages of notes. Google Docs Tips Anki Tips. Personal Kanban: Viral in Higher Ed Institution (Story 1 of 3) - Marian H. WillekeMarian H. Willeke.

I have long felt that Personal Kanban is a viral condition, spreading based on observing it’s use and then experiencing it. 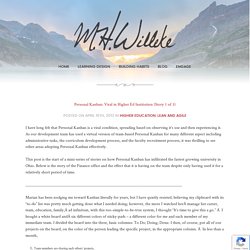 As our development team has used a virtual version of team-based Personal Kanban for many different aspect including administrative tasks, the curriculum development process, and the faculty recruitment process, it was thrilling to see other areas adopting Personal Kanban effectively. This post is the start of a mini-series of stories on how Personal Kanban has infiltrated the fastest growing university in Ohio. Read This Google Email About Time Management Strategy. 4 Things to Check – What to do Before Sending Any Email.

3 Easy, Proven Strategies for Improving Your Focus. How to Quickly Create a Poll in Outlook (With Video) How Timeboxing Works and Why It Will Make You More Productive. Executive Summary In a recent survey of 100 productivity hacks, timeboxing — migrating to-do lists into calendars — was ranked the most useful. 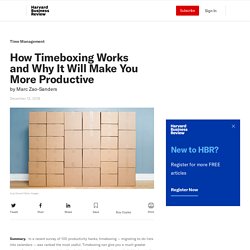 Timeboxing can give you a much greater sense of control over your workday. How To Work With Anyone's Productivity Style. The reason we find other people so challenging to work with is very simple: Your work style, which I call your productivity style, might clash with the work style of another. That difference in productivity style leads to misunderstandings and tension that, more often than not, impede you from effectively completing your best work. Your productivity and effectiveness are directly connected to your ability to work well with others, and workflow differences threaten to cause misunderstandings.

In any given situation, you will find four types of productivity style: prioritizer, planner, arranger, and visualizer. A prioritizer prefers logical, analytical, fact-based, critical, and realistic thinking.