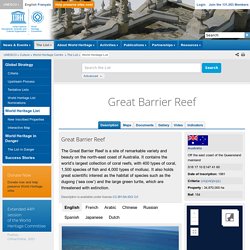 Practically the entire ecosystem was inscribed as World Heritage in 1981, covering an area of 348,000 square kilometres and extending across a contiguous latitudinal range of 14o (10oS to 24oS). The Great Barrier Reef (hereafter referred to as GBR) includes extensive cross-shelf diversity, stretching from the low water mark along the mainland coast up to 250 kilometres offshore.

This wide depth range includes vast shallow inshore areas, mid-shelf and outer reefs, and beyond the continental shelf to oceanic waters over 2,000 metres deep. Within the GBR there are some 2,500 individual reefs of varying sizes and shapes, and over 900 islands, ranging from small sandy cays and larger vegetated cays, to large rugged continental islands rising, in one instance, over 1,100 metres above sea level. 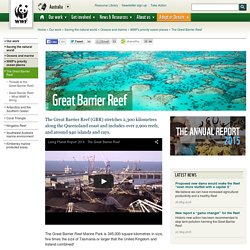 The Great Barrier Reef Marine Park is 345,000 square kilometres in size, five times the size of Tasmania or larger that the United Kingdom and Ireland combined! The reef is immensely diverse. It is home to more than 1,500 species of fish, 411 types of hard coral, one-third of the world’s soft corals, 134 species of sharks and rays, six of the world’s seven species of threatened marine turtles, and more than 30 species of marine mammals, including the vulnerable dugong. 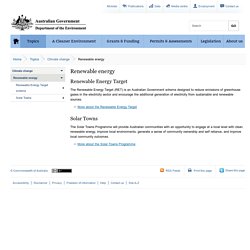 More about the Renewable Energy Target Solar Towns The Solar Towns Programme will provide Australian communities with an opportunity to engage at a local level with clean renewable energy, improve local environments, generate a sense of community ownership and self reliance, and improve local community outcomes. Theconversation. Crocodiles have a rather off-putting character trait: they bite. 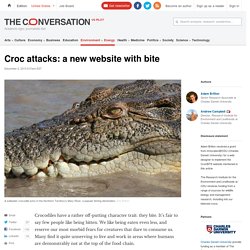 It’s fair to say few people like being bitten. We like being eaten even less, and reserve our most morbid fears for creatures that dare to consume us. Many find it quite unnerving to live and work in areas where humans are demonstrably not at the top of the food chain. It is surprising that we’ve done so little work to track clashes between crocodiles and humans, including where, when and why they occur. This week Big Gecko and Charles Darwin University are launching CrocBITE, a worldwide crocodilian attack database that does exactly that. Crocodiles. Flooding and potentially dangerous wildlife Flooding of waterways and low-lying areas can temporarily increase the mobility and distribution of potentially dangerous wildlife – particularly snakes and crocodiles – and as such these animals may be present in areas they do not usually inhabit. 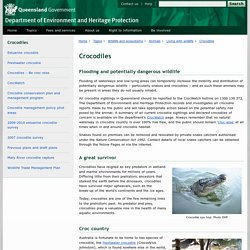 All crocodile sightings in Queensland should be reported to the CrocWatch hotline on 1300 130 372. The Department of Environment and Heritage Protection records and investigates all crocodile reports made by the public and will take appropriate action based on the potential safety risk posed by the animal. A summary of all current crocodile sightings and declared crocodiles of concern is available on the department’s CrocWatch ( ) page. Always remember that no natural waterway in crocodile country is ever 100% risk free, and the public should remain 'croc-wise' ( ) at all times when in and around crocodile habitat. A great survivor Crocodile spy hop.

Croc country Crocodile on bank. Clean_up_australia_e-waste_factsheet.pdf. E-waste report updated. ARP : Mobile Phone Waste and The Environment. More than 800 million people around the world currently use mobile phones and that figure is growing daily as consumers get bombarded by advertising campaigns exhorting them to upgrade to the latest, most fashionable model. 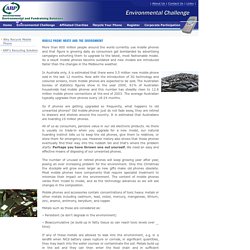 As a result mobile phones become outdated and new models are introduced faster than the changes in the Melbourne weather. In Australia only, it is estimated that there were 3.5 million new mobile phone sold in the last 12 months. Now with the introduction of 3G technology and coloured screens, more mobile phones are expected to be sold. The Australian bureau of statistics figures show in the year 2000, 61% of Australian households had mobile phones and this number has steadily risen to 12.8 million mobile phone connections at the end of 2003. The average Australian typically upgrades their phones every 18-24 months.

So if phones are getting upgraded so frequently, what happens to old unwanted phones? Climate Change in Australia. Are climate skeptics right? Conventional wisdom agrees that industrial pollution, carbon dioxide emissions and an increased use of fossil fuels are directly contributing to a global warming trend. 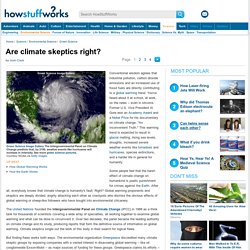 You've heard about it at school, at work, on the news -- even in sitcoms. Former U.S. Climate change Home Page. Cool Australia. Climate change and the energy revolution. Climate change – News, Research and Analysis – The Conversation. Any shift in the focus of climate change research at CSIRO should look at how to stop the problem and reduce its impact on Australia. 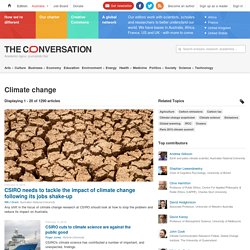 CSIRO's climate science has contributed a number of important, and unexpected, findings. Forests that grow back after being cleared for agriculture or by logging grow back much faster than old-growth forests, soaking up carbon and providing vital habitat. Models based on where the mosquitoes that transmit Zika are found and human travel patterns to and from infected areas are key to predicting where the virus will spread. Former PM's business advisor Maurice Newman recently claimed that satellite temperature data tell a different story to data collected on the ground. He's right - but that's how it's meant to be. Bushfires are threatening Tasmania's World Heritage area and ancient plants, warning us of a possible future under climate change.

No matter how much evidence scientists present in support of climate change there are those who refuse to believe it. Climate change and the energy revolution.