Divers transplant coral to boost health of Great Barrier Reef after bleaching and climate change damage. Divers are growing and replanting coral in a million-dollar effort to restore* the glory of the Great Barrier Reef. 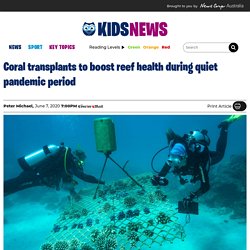 Man-made underwater nurseries, using fragments* of live coral attached by wire to rock, are helping to revitalise* some of the most popular tourist reefs off Cairns and Port Douglas. While tours to the reef have been shutdown under COVID-19 restrictions, local operators like Passions of Paradise and reef scientists have been growing coral on frames and planting it with spectacular results at underwater sites at Hastings and Milne reefs. About 1000 pieces of coral have been hand-planted by a team of scuba divers on Hastings Reef, about an hour by boat from Cairns.

“When tours resume, passengers will be able to snorkel over the site which boasts healthy marine life and corals near the nursery,” said Passions of Paradise chief Scott Garden. Going bright may help corals recover from bleaching. For some corals, going bright may be part of their fight against bleaching. 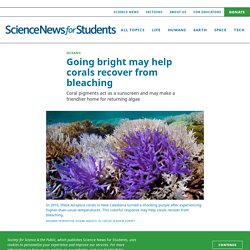 Beneficial algae normally dwell within the cells of most reef-building corals. These algae help feed the corals and give them their color. But higher-than-normal ocean temperatures can cause some corals to bleach. This means they lose those helpful algae. Affected corals can become bone white and may struggle to survive. “It’s visually very striking, but … there was surprisingly little information” on how and why colorful bleaching happens, says Elena Bollati. $300 million for research projects to help save Australia’s Great Barrier Reef. Painting clouds with water and growing heat-tolerant* coral are just two of the ideas being considered — together with action on climate change — to help the Great Barrier Reef be healthier in 30 years’ time. 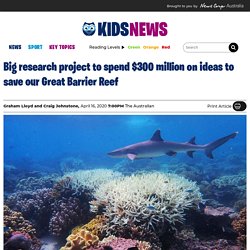 Australian Institute of Marine Science chief executive Paul Hardisty said early research into new technologies aimed at building the Reef’s resilience* had shown some “really remarkable positive outcomes*”. AIMS is leading a $300 million research effort, launched on Thursday, to study new ways to protect the Great Barrier Reef from coral bleaching and other impacts of climate change. The research launch comes as coral experts discover the Reef is experiencing its third coral bleaching event in five years, with the latest episode being more severe* and widespread* than the previous two in 2016 and 2017. One hundred and sixty ideas have been looked at over the past two years to see if they are worth continued research and of those, more work will be done on 117 ideas. 2. Reef Bleaching - Classroom - BTN. JONES McBONES: G'day, G'day, G'day my name's Jones McBones and welcome to my Aussie Ghost Tours. 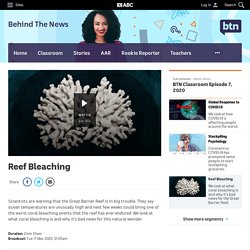 You want ghosts, we've got ghosts. Plenty of 'em. Here we have the old Melbourne Gaol. Ohhh, spooky. It’s complicated: coral bleaching is caused by more than just heat. Scientists in the Indian and Pacific Oceans used the El Nino of 2016 – the warmest year on record – to evaluate the role of excess heat as the leading driver of coral bleaching and discovered the picture was more nuanced than existing models showed. 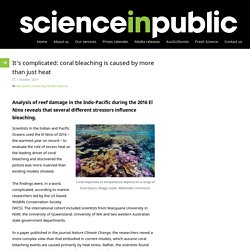 The findings were, in a word, complicated, according to marine researchers led by the US based Wildlife Conservation Society (WCS). The international cohort included scientists from Macquarie University in NSW, the University of Queensland, University of WA and two western Australian state government departments. In a paper published in the journal Nature Climate Change, the researchers reveal a more complex view than that embodied in current models, which assume coral bleaching events are caused primarily by heat stress. Rather, the scientists found that bleaching is driven by a variety of stressors, and each region responds differently. “By studying the temperature patterns, we were better able to understand how organisms responded. 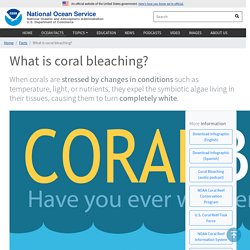 When water is too warm, corals will expel the algae (zooxanthellae) living in their tissues causing the coral to turn completely white. This is called coral bleaching. When a coral bleaches, it is not dead. Corals can survive a bleaching event, but they are under more stress and are subject to mortality. In 2005, the U.S. lost half of its coral reefs in the Caribbean in one year due to a massive bleaching event. Not all bleaching events are due to warm water.

Major coral bleaching crisis spreads worldwide - CSMonitor.com. Washington — The bleaching of colorful coral is spreading into a worldwide, devastating crisis, scientists say, and they predict it will likely get worse. 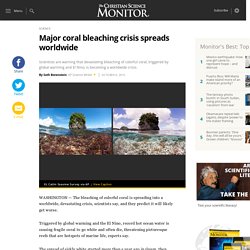 Triggered by global warming and the El Nino, record hot ocean water is causing fragile coral to go white and often die, threatening picturesque reefs that are hotspots of marine life, experts say. The spread of sickly white started more than a year ago in Guam, then devastated Hawaii, infected the rest of the tropical Pacific and the Indian oceans and has now infested Florida and the Caribbean. On Thursday, the National Oceanic and Atmospheric Administration and international reef scientists pronounced it a global coralbleaching event, only the third in recorded history. No place with coral has been spared, though some regions — such as Hawaii — have been hit harder than others, experts said. Excessive heat stresses the living coral, which turns white and then becomes vulnerable to disease. Florida started getting hit in August. Online: