How did the Great Barrier Reef form? New reef discovered off the coast of Australia – Kiwi Kids News. 1. 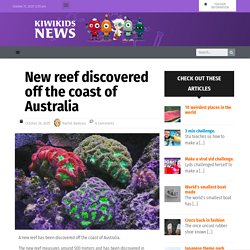 Who is the main person or group of people in this news article? 2. What was the key event from the news article? 3. Where did this event take place? 4. 1. 2. 3. 4. Coral starts to recover on Queensland’s Great Barrier Reef, according to Australian Institute of Marine Science report. The Great Barrier Reef is fighting back, with new research showing “encouraging” signs of coral growth in two-thirds of 86 monitored reefs. 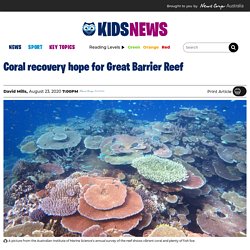 The annual report on the health of the reef by the Australian Institute of Marine Science, published on August 21, has been welcomed by tourism operators who say they are battling widespread perceptions* the reef is already dead. The report shows modest* increases in coral coverage in the reef’s central and southern zones, and a stabilisation* in the north, after several years of hits from bleaching, cyclones and outbreaks of the crown-of-thorns starfish. Head researcher Dr Mike Emslie said the survey, which is now in its 35th year, showed “the reef is resilient, but this resilience has limits”. Dr Emslie’s team conducted its assessment between September 2019 and June 2020 at reefs scattered from below Rockhampton to the very tip of Cape York.

While the signs of growth were “encouraging”, Dr Emslie stressed that many reefs were coming from a low base. Great Barrier Reef - Science (5,6,7,8) Understanding the biodiversity of the Ningaloo Canyons in 4K. The faceless cusk eel, slime stars, sea butterflies, glass sponges, and, at around 47 meters (154 feet) long, what may be the largest siphonophore Apolemia ever recorded. 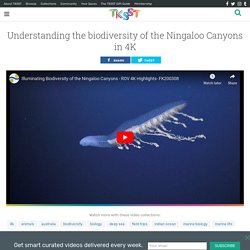 This stunning 4K footage was collected from dives into the eastern Indian Ocean’s Ningaloo Canyons. The Schmidt Ocean Institute‘s ROV SuBastian reveals some rarely-seen deep sea creatures from their record-setting research. Successful coral IVF trial using drones and inflatable pools on Great Barrier Reef. Scientists with an army of robotic drones and a fleet of backpack-sized inflatable pools are working to save the Great Barrier Reef as part of the world’s largest collaboration* of science, conservation* and tourism. 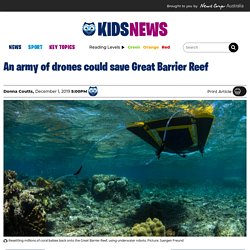 Coral spawn is collected then grown in inflatable nursery pools and then distributed onto damaged parts of the reef. Scientists from Southern Cross University, James Cook University and Queensland University of Technology are working together to perfect the technique – which they call “coral IVF*” — as part of the Larval* Restoration Project, so they can use it on a massive scale. Great Barrier Reef biggest blue hole. Scientists have discovered a massive ancient hole in the Great Barrier Reef and they’re very excited about what is in it. 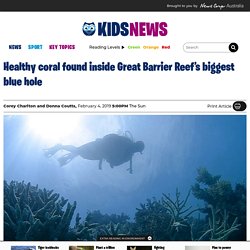 Experts dived 20m down into the hole, which was found in one of the least explored parts of the reef, which is off the coast of Queensland. There they discovered healthy coral, a rare discovery given the reef suffers from widespread coral bleaching. Bleaching occurs when corals are put under stress by warming seawater, storms or some other threat and expel* the algae* that live in their tissue*. VIDEO: This was filmed by marine biologist Johhn Gaskell Marine biologist* Johnny Gaskell wrote on social media platform Instagram: “This Blue Hole has previously been described by geologists* who suggested it could be even older than the famous Great Blue Hole, in Belize. 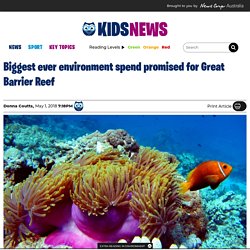 The world’s biggest reef, which is larger than 70 million football fields joined together and can be seen from space, is under threat*. Great Barrier Reef Solutions: 28/08/2018, Behind the News. There are some big threats facing the reef but we look at what needs to change to make sure it's still around for centuries to come. 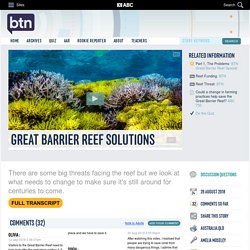 How do we save the Great Barrier Reef? It's a question a lot of Australians have been asking for years now and the good news is there are some ideas about how we might be able to turn things around. Experts say pollution is one of the biggest issues affecting the water around the reef. Farmers can help by using less pesticides and fertilisers and trying to reduce run-off from their farms. That's the water that flows over the ground and into streams and creeks and eventually out to sea. These prickly pests like nothing more than to chomp down on tasty coral. Great Barrier Reef Problems: 28/08/2018, Behind the News. It's the biggest reef in the world but experts are really worried about how it's going. 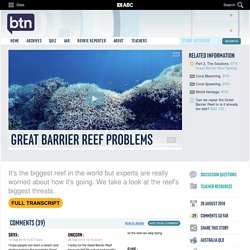 We take a look at the reef's biggest threats. You'd have to be living under a rock, or many rocks actually, not to have heard that this big ole thing, the Great Barrier Reef, is in a spot of trouble. But, from pictures like this that may seem hard to believe. The reef covers two and a half thousand kays off the coast of Queensland, and two million people flock to it every year. All keen to check out the super colourful coral, and the more than 1,600 species of fish that call it home! Saving the reef. Saving the reef. Great Barrier Reef tourism: caught between commerce and conservation alarm. In the dark clouds gathering over the future of the Great Barrier Reef, there has been a small silver lining for the people who make their living showcasing the natural wonder. 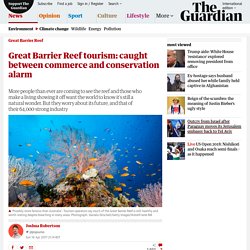 When the reef was rocked by an unprecedented second mass bleaching event in the space of a year, the coral hardest-hit by heat stress lay mostly in the tourist-heavy latitudes between Cairns and Townsville. But despite last year’s damage compounded by new cases dotted across 800 reefs in a 1,500km stretch, not a single reef tourism operator has been forced to seek out new ground to take visitors. The Great Barrier Reef Marine Park Authority, which licenses operators to visit designated reef sites, confirmed it has received one request to change a permit.

And that was not because of bleaching but Cyclone Debbie further south, which damaged that other hub of reef tourism, the Whitsundays after it escaped the bleaching. For now at least. Just 7% of the reef is set aside for tourism. . … we have a small favour to ask. Saving the reef. Pub fact sheet how is human activity impacting the great barrier reef 31aug17.

It's a cautionary tale with a twist. Unless we do more to protect them, coral reefs could become extinct by 2050 due to pollution & climate change. This video was released just ahead of the landmark Copenhagen summit on climate change in order to draw attention to the plight of these fragile ecosystems. Sadly, the summit ended in failure -- and the future of our reefs is still at risk. – bpsweblinks 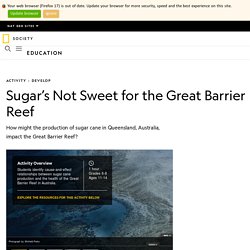 Sugar’s Not Sweet for the Great Barrier Reef - National Geographic Society. Plan to save Great Barrier Reef from encroaching farm pollution. Greening Australia By Alice Klein in Mungalla Station, Australia The sky above is grey and drizzly, but the wetlands are still beautiful to behold. Flocks of magpie geese settle on the glassy water, honking and nibbling at bright green tufts of sedge. I’m at Mungalla Station, a cattle property in far north Queensland. Here, a large-scale conservation project is underway.

The Great Barrier Reef is a World Heritage Site, and one that is known to be in dire trouble. Advertisement Annette Ruzicka Cassady is a member of the local Nywaigi people, who took over Mungalla when it was returned to them by the Indigenous Land Corporation in 1999. Building a Better Coral Reef - The New York Times. Ral transplants could help Great Barrier Reef. Scientists are regrowing coral from larvae on damaged patches of the Great Barrier Reef in a project that could change the management of reef systems worldwide. Professor Peter Harrison from Southern Cross University has been collecting coral spawn off Heron Island on the Great Barrier Reef and maturing it in tanks.

“It’s really exciting, this essentially is the rebirth of the reef,” Professor Harrison said. A team of scientists has deposited millions of coral larvae back onto damaged areas that may not regenerate naturally. They created large enclosures around the coral using mesh curtains and special tiles to monitor growth. Days later, photographs reveal coral polyps had survived, and were settling into their new home. It is the first time this technique has been used in Australia, and it follows a successful trial in the Philippines that transformed reefs devastated by blast fishing. “I think that this could be something that changes management of reefs worldwide.

Astronauts team up with scientists to save coral reefs - CBBC Newsround. The Threats - Great Barrier Reef Foundation. Great Barrier Reef. Outstanding Universal Value Brief synthesis As the world’s most extensive coral reef ecosystem, the Great Barrier Reef is a globally outstanding and significant entity. Practically the entire ecosystem was inscribed as World Heritage in 1981, covering an area of 348,000 square kilometres and extending across a contiguous latitudinal range of 14o (10oS to 24oS).

The Great Barrier Reef (hereafter referred to as GBR) includes extensive cross-shelf diversity, stretching from the low water mark along the mainland coast up to 250 kilometres offshore. This wide depth range includes vast shallow inshore areas, mid-shelf and outer reefs, and beyond the continental shelf to oceanic waters over 2,000 metres deep. Within the GBR there are some 2,500 individual reefs of varying sizes and shapes, and over 900 islands, ranging from small sandy cays and larger vegetated cays, to large rugged continental islands rising, in one instance, over 1,100 metres above sea level.