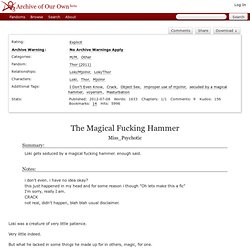 Very little indeed. But what he lacked in some things he made up for in others, magic, for one. Magic was in his very heart and soul and it manifested itself in many different ways. Sometimes if left alone in a room with Mjolnir he could feel the hum of life and magic radiating from the hammer. Sometimes he felt more but he was sure it was a trick, some kind of mix up with his own feelings towards the hammers master. One afternoon while studying and waiting in Thor's chambers for his not-brother to return from a meeting with his father, Loki slammed down his hand and douses the small flame he had been building up as he glared at Mjolnir.

"What do you want of me? " The hammer hummed at him. "How rude and so very forward of you," he hissed, perplexed by this. "Will you reframe from humming such filth at me, I'm sure your master will return and offer you some affection" Loki huffed trying to concentrate. But Mjolnir wouldn't let up. "Stop it! " “Yes, Yes!” Spoils of War - LokiBitch07 - Thor (2011. Let's Give Them a Show - DevilCross - Marvel. Enthralled - Kay (sincere) - The Avengers (2012), Thor (2011), Marvel Avengers Movies Universe. Veni Vidi Vici - miikkaa_xx - Thor (Comics), Journey into Mystery. Trial Run - miikkaa_xx - Journey into Mystery, Thor (Comics. Main Content <p id="javascript-warning"> While we&#x27;ve done our best to make the core functionality of this site accessible without javascript, it will work better with it enabled. 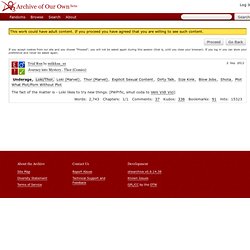 Please consider turning it on! </p> Archive of Our Own beta Log In Site Navigation This work could have adult content. If you accept cookies from our site and you choose "Proceed", you will not be asked again during this session (that is, until you close your browser). What Tony Stark shouldn't have done, but did anyway - orphan_account - Multifandom. Seriously, it was too cold to spend the night outdoors, but the team was exhausted and needed a break before heading back to the Vanir capital, where they were going to be transported back to Asgard. 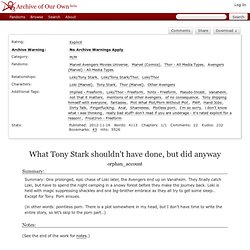 Tony’s armour had earned him the privilege to help Thor guard Loki for the night. Tony shivered uncontrollably on the ground next to the two Asgardians. Thor’s gentle snoring indicated that he slept rather soundly even with his traitorous excuse of a brother cuddled next to him. They were lying on their sides, one next to the other, Loki’s back to Thor’s chest. Fitzpleasure - MelfinaLupin - Thor - All Media Types, Young Avengers. It was well past midnight when Thor returned to Stark Tower. 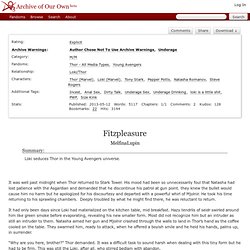 His mood had been so unnecessarily foul that Natasha had lost patience with the Asgardian and demanded that he discontinue his patrol at gun point. they knew the bullet would cause him no harm but he apologized for his discourtesy and departed with a powerful whirl of Mjolnir. He took his time returning to his sprawling chambers. Deeply troubled by what he might find there, he was reluctant to return. It had only been days since Loki had materialized on the kitchen table, mid breakfast. Hazy tendrils of seidr swirled around him like green smoke before evaporating, revealing his new smaller form. “Why are you here, brother?” The air was tense as Natasha, Tony, and Steve glanced between the two mismatched brothers.

“Hold up,” Tony ordered, visibly shocked. “Yes,” Thor replied. Loki pulled a face and dropped into a chair. “You have never wanted to before.” Loki chewed on the ribbon of meat for a moment, his green eyes stormy. Acquired Taste - Chapter 1 - weeklypants - Thor (Comics), Journey into Mystery. Chapter Text “Thor?” 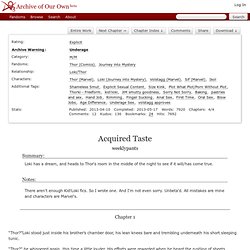 Loki stood just inside his brother’s chamber door, his lean knees bare and trembling underneath his short sleeping tunic. “Thor?” He whispered again, this time a little louder. His efforts were rewarded when he heard the rustling of sheets, watched the shadow in the great bed stir. Loki’s voice dropped and he added almost imperceptibly, “I must know if it is the truth, brother. “Come. “Did we ever....i mean... you and I......rut?” Loki knew that while this was a more than embarrassing topic to ask about, he would not be able to relax until he knew the answer. “I want.” “Just a little eager,” he noted. “More.” Thor almost groaned in arousal at his wanton little brother, but he caught himself. “Loki,” he rumbled, “you are too tight... Loki pouted up at him. “Then... can you help me practice? “Of course.” “Good boy,” he said, and Loki positively shook with excitement.