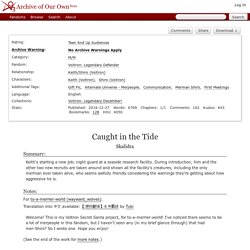 " Keith falls into step along with the two other new guards, pulling his gaze away from the tanks set into the walls and the flashes of movement in them to pay attention to their guide. After passing the interviews, and the physical examination, he'd finally been accepted as a guard for the seaside research facility. The biggest and best, with specimens from all over the world and tanks specifically designed to hold creatures from dozens of different styles of environments. Deep-sea creatures barely even seen before they'd developed the technology to move them safely, enormous creatures in tanks of thousands and thousands of gallons, and— "You'll be night-guards for the time being, until you prove you can handle other shifts. He joins in on the chorus of 'yes, sir's, keeping his hands clasped behind his back. The senior guard stops in front of a door, pressing a hand to the scanner beside it. The senior guard's face tightens, mouth flattening out. 'Like you.'

We laugh, we fumble, we take it day by day - waitingforreason - Yuri!!! on Ice (Anime) It was a momentous occasion when Victor and Yuuri brought their son on the ice for the first time. 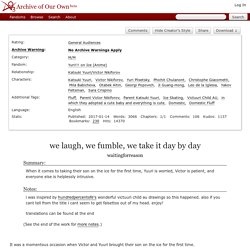 Of course it wasn’t as momentous as the day they actually brought the small boy home, with the preparations, nerves, numerous friends and family rushing about, and one doozy of a panic attack to mark the occasion; but this was already an exciting milestone, one that was sure to fill at least five pages in the scrapbook Phichit already seemed to be halfway through filling up. All Yuuri wanted was a safe and mostly calm excursion with Victor and the baby. All Victor wanted was to see the two people he loved the most light up with joy out on the ice. What they got was a party. Born To Make History - BeautyButterBae - Yuri!!! on Ice (Anime) Sometimes Yuuri found it easy to wake up, glance to his side and see his beautiful husband laying right beside him, then simply move on and go about his day.And some mornings were like today, where Yuuri sat up in their shared bed, only watching as Victor Nikiforov – the man he had married only a few months earlier – slept peacefully, still disbelieving that all of this had happened, that it was real, that he got so lucky . 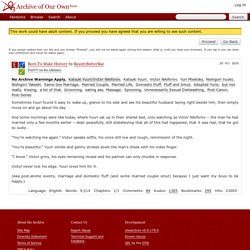 “You’re watching me again.” Victor speaks softly, his voice still low and rough, reminiscent of the night. In jokes and Pettiness - Chapter 1 - preciousbunnynoiz - Yuri!!! on Ice (Anime) Chapter Text Phichit smiled at the grumpy blonde to his left as they rode the lift in the high end apartment building Yuri was apparently residing in with his fiancé/coach. 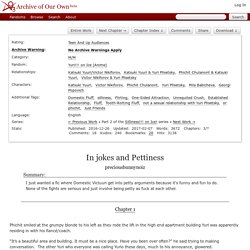 “It’s a beautiful area and building. It must be a nice place. Have you been over often?” He said trying to making conversation. “Welcome to hell.” Phichit was…slightly alarmed but followed his guest wheeling his suitcase behind him. “I’LL GET IT!” “MAKE SURE YOU’VE PUT YOUR DICK AWAY FIRST!” Victor opened the door with a big smile. “Phichit! “It’s fine, I got Yuri’s message.” “I’ll be going then.” “Nonsense! “Would you like some tea Phicht? “Mmm that would be lovely.” While leaving his bag by the door and removing his coat he spied something that seemed really out of place. Sight of the sun - cityboys - Yuri!!! on Ice (Anime) The click of the lock must wake him, because when Victor nudges the door open with his elbow, Yuuri’s already stirring, head sticking out from under the covers. 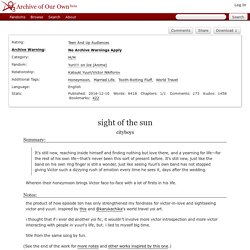 “Welcome back.” Yuuri had rolled over at some point, most likely to escape the sunlight peeking in through the curtains Victor had opened before leaving, and he blinks at both Victor and the window now. “Is that—” “Breakfast? Yes.” Yuuri keeps blinking, stuck in a conscious effort to blink himself awake. Get A Room, Just Not This One - chellethewriter - Yuri!!! on Ice (Anime) Dream Awake - Ashida - Yuri!!! on Ice (Anime) Yuuri is not a morning person, Victor notices this after he moves into his apartment in St Petersburg and makes it feel like home. 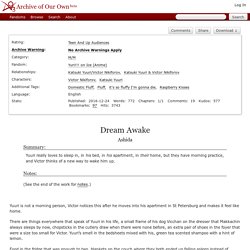 There are things everywhere that speak of Yuuri in his life, a small frame of his dog Vicchan on the dresser that Makkachin always sleeps by now, chopsticks in the cutlery draw when there were none before, an extra pair of shoes in the foyer that were a size too small for Victor. Yuuri’s smell in the bedsheets mixed with his, green tea scented shampoo with a hint of lemon. Food in the fridge that was enough to two, blankets on the couch where they both ended up falling asleep instead of watching the movie they’d picked, there was warmth and clutter and everywhere he turned it was unmistakable that Yuuri was here to stay.

He looked happy, peaceful, and this was the reason Victor always got up so much earlier in the first place, because why sleep when reality was better. In need of melted marshmallow cuddles - Hitsugi_Zirkus - Yuri!!! on Ice (Anime) Through the haze of half-sleep, Viktor was aware of two things. 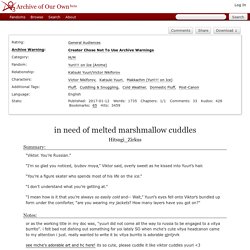 One, his bed was very disappointingly half-empty. The comforter on the right side of the bed was peeled back and completely flat, a fact Viktor’s hand knew well after blindly searching for the soft, solid heat of his fiance that should have been there. Eyes closed, Viktor let out a groan and switched to reaching out for his phone on the nightstand. The Different Types of Warmth - BeautyButterBae - Yuri!!! on Ice (Anime) Show Chapter. Stammi vicino - sunshinehide - Yuri!!! on Ice (Anime) Yuuri moves to St. 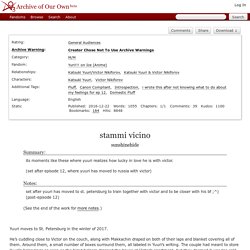 Petersburg in the winter of 2017. He’s cuddling close to Victor on the couch, along with Makkachin draped on both of their laps and blanket covering all of them. Around them, a small number of boxes surround them, all labeled in Yuuri’s writing. The couple had meant to store Yuuri’s belongings as soon as the hired helpers dropped the boxes at Victor’s apartment, but they deemed it was too cold to be doing anything and snuggled up on the couch instead.

Yuuri is absentmindedly stroking Makkachin’s soft, plush fur, with his head against Victor’s chest (he can hear the steady and comforting heartbeat, he notes fondly), and not paying attention to whatever program is playing on the television in front of them. Victor is holding Yuuri’s hand underneath the blanket, and ever so occasionally, he brushes over Yuuri’s ring finger, where the golden band sits nicely and snug. “Did you bring those posters of me from your room back in Japan?” Yuuri falls in love all over again. Love Like You - LFMH021 - Yuri!!! on Ice (Anime) Viktor opened his eyes as sunlight streamed onto their bed from the pulled back curtain. 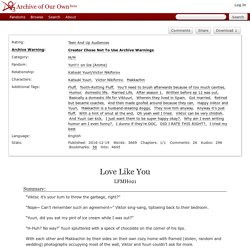 He squinted and then rubbed the sleep away before yawning hugely. He hummed and looked down. A big smile spread on his face when he found a still-asleep Yuuri tucked under his chin. Safety Hazards in St. Petersburg - lucycamui - Yuri!!! on Ice (Anime) Unwritten - Chapter 5 - kaizuka - Yuri!!! on Ice (Anime) Chapter Text Yuuri doubles over, hazily watching as one drop of sweat slides down a strand of his hair until it falls with barely a sound onto the ice beneath him. 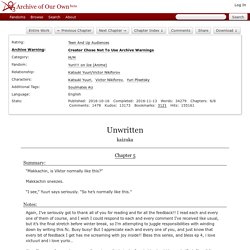