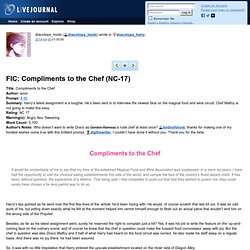 He’s been sent in to interview the newest face on the magical food and wine circuit. Chef Malfoy is not going to make this easy.Rating: NC 17Warning(s): Angry Sex, SwearingWord Count: 5,100Author's Notes: Who doesn’t want to write Draco as Gordon Ramsay a rude chef at least once? Birdsofshore, thanks for making one of my fondest wishes come true with this brilliant prompt. digthewriter, I couldn’t have done it without you. Thank you for the beta. Compliments to the Chef It would be uncharitable of me to say that my time at the esteemed Magical Food and Wine Association was unpleasant. Harry’s lips quirked as he went over the first few lines of the ‘article’ he’d been toying with.

Besides, as far as his latest assignment went, surely he reserved the right to complain just a bit? ‘Ambrosia’ is one of those minimalistic places with a side of pretentious thrown in, just to shake things up. Pocket Full Of Starlight (Never Let It Fade Away) - Femme (femmequixotic), noeon (noe) - Harry Potter - J. K. Rowling. Tick Tock - for __hibiscus. Tick Tock "Pink! 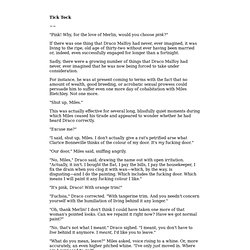 Why, for the love of Merlin, would you choose pink? " If there was one thing that Draco Malfoy had never, ever imagined, it was living to the ripe, old age of thirty-two without ever having been married or, indeed, even successfully engaged for longer than a fortnight. Sadly, there were a growing number of things that Draco Malfoy had never, ever imagined that he was now being forced to take under consideration. For instance, he was at present coming to terms with the fact that no amount of wealth, good breeding, or acrobatic sexual prowess could persuade him to suffer even one more day of cohabitation with Miles Bletchley. "Shut up, Miles. " This was actually effective for several long, blissfully quiet moments during which Miles ceased his tirade and appeared to wonder whether he had heard Draco correctly. 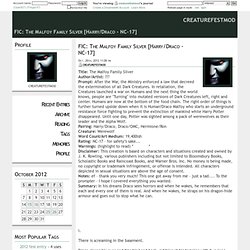 Prompt: After the War, the Ministry enforced a law that decreed the extermination of all Dark Creatures. In retaliation, the Creatures launched a war on Humans and the next thing the world knows, people are "Turning" into mutated versions of Dark Creatures left, right and center. Humans are now at the bottom of the food chain. Harry/Draco MPreg - Fic: I Was a Teenage Werewolf! Title: I Was A Teenage Werewolf! 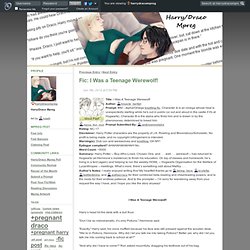 Author: treacle_tartletPrompt: #80 - Alpha/Omega knotting fic. Character A is an omega whose heat is unexpectedly starting while he's out in public (or out and about in the castle if it's at Hogwarts). Character B is the alpha who finds him and is drawn in by the pheromones, determined to breed him.Prompt Submitted By: Mates.Creature!Fic - H/D-Tropes. Potter lunged for him again, and this time he caught Draco off balance, shoving him backward into the wall. 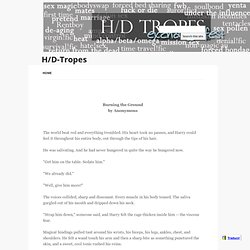 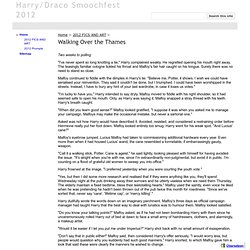 He regretted opening his mouth right away. The teasingly familiar cologne tickled his throat and Malfoy's fair hair caught on his tongue. Surely there was no need to stand so close. Malfoy continued to fiddle with the dimples in Harry's tie. "I'm lucky to have you," Harry intended to say dryly. "When did you learn good sense? " Asked was not how Harry would have described it. Malfoy's eyebrow jumped. "Call it a walking stick, Potter. Harry frowned at the image. "Yes, but then I did some more research and realised that if they were anything like you, they'll spend Wednesday night at the pub drinking away their sorrows and be utterly useless when we need them Thursday. Harry dutifully wrote the words down on an imaginary parchment.

"Do you know your talking points? " "Would it be easier if I let you put me under Imperius? " "Don't say that in public either! " Side-Along - lumosed_quill - Harry Potter - J. K. Rowling. If this wasn't a curse then it was Hell. 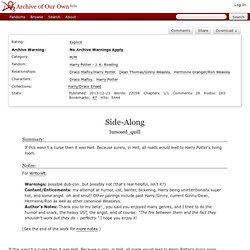 Because surely, in Hell, all roads would lead to Harry Potter's living room. "Malfoy," Potter intoned with an eyebrow raised – just the one, mind you – as, once again, Draco found himself in Potter's house, this time having tumbled out of the Floo. "Fuck! " Draco spat, looking around himself in disbelief.

Potter turned to him and crossed his arms. Draco sneered at him, picked up the briefcase he'd dropped, and stomped off toward Potter's front door. He stepped out onto the pavement, through the glamors and magicks, and frowned on the curb. Azoth - Anonymous - Harry Potter - J. K. Rowling. The World of Management (or Harry Potter and the Office Romance) by moonflower_rose - Harry/Draco Smoochfest 2012. October 3, 2011 “Morgan – report!” 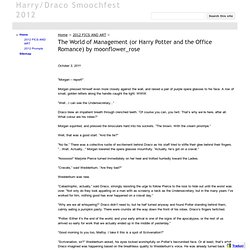 Morgan pressed himself even more closely against the wall, and raised a pair of purple opera glasses to his face. A row of small, golden letters along the handle caught the light: WWW. “Well...I can see the Undersecretary...” Decorated Hearts. Title: Decorated HeartsAuthor:literaryspellRating: NC-17Word Count: ~13 700Beta Acknowledgement: Huge, massive thanks to kazfeist, rainien, and Krystle Lynne for their hard work on this! 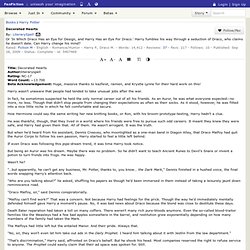 Harry wasn't unaware that people had tended to take unusual jobs after the war. In fact, he sometimes suspected he held the only normal career out of all his friends. OLDENUF2NB! Author: tigersilverRecipient: oldenuf2nbTitle: Chances ArePairing(s): Harry/Draco; implied previous canon pairings.Summary:There are two men who are good friends. 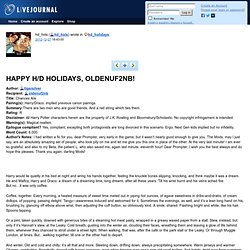 “That wand’s more trouble than it’s worth,” said Harry. “And quite honestly,” he turned away from the painted portraits, thinking now only of the four-poster bed lying waiting for him in Gryffindor Tower, and wondering whether Kreacher might bring him a sandwich there, “I’ve had enough trouble for a lifetime.” -- Harry Potter and the Deathly Hallows, page 600. “That certainly is true,” Ron concedes, patting Harry on the shoulder as they leave the murmuring portraits behind and descend the stone staircase. Harry is pretty sure that he means to be gentle, but the reassuring touch only makes his aching bones and muscles protest harder. “Are you going to do it now?

Fingers clenched around all three wands in his possession, Harry opens his mouth to speak but Hermione beats him to it. Trenches, a harry potter fanfic. Title: TrenchesAuthor: sara_holmesDisclaimer: I do not own any of the recognisable content. They belong to JKR and the publishers.Rating: RWord count: 3,200ishA/N: This was written as a birthday gift for the lovely hidinginmybones, over on the hdgifts livejournal community. Her prompts included a snowy picture, and the phrases "sharing cigarettes," and "a cottage in the woods.

" This is what we ended up with. Happy birthday lovely! The Silent World Within You - Chapter 5 - Femme (femmequixotic), noeon (noe) - Harry Potter - J. K. Rowling. Tomorrow, and Tomorrow, and Tomorrow. Notes: Many thanks to m.e. and Rachel for long-ago betas. Tomorrow, and Tomorrow, and Tomorrow Chapter One: Visiting Hours Better by far you should forget and smile Than that you should remember and be sad. The Eros Affair // Harry/Draco collaborative project. Title: Yesterday Brought the Beginning Author: Marks Rating: NC-17 Canon: HBP spoilers. Length: 2,200 words. Summary: "This was the moment that made Draco's breath catch. " Scenario: I promise to stop saying, "Have you come yet? " Disclaimer: I do not own, nor pretend to own any characters or locations within the HP Universe, they remain the sole property of J. A Song, Incomplete - for pir8fancier. A Song, Incomplete The hostess led Harry through the front lounge toward the area off the main dining room, full of little niches where the more private customers took their meals.

It wasn’t something he’d requested, but he was grateful for the consideration. Kailash, When It Rises. This Unexpected Windfall - for themostepotente. This Unexpected Windfall Dearest Mr Oliver O'Mullin, It is of the utmost importance that you contact me at the Ministry for Magic as soon as possible. The matter of the 100,000 Galleons must be settled or the gold will be absorbed into the general fund by 1st January, 2011. Please, we must resolve this matter, as the 100,000 Galleons are not to remain here any longer. I realise that this comes as a surprise, but please respond in order to take advantage of this unexpected windfall. If you do not respond, we will have to convene a hearing to determine how to distribute the funds. Malady McVeril Office of Unclaimed Funds. RILLALICIOUS!

Barreling Through the Night - "Hurt for the Right Reasons", Harry/Draco, NC-17.