Researchers find how cancer can be killed by body's own immune system. A new way to help the body's immune system get past that deception and destroy cancer, has been found by a University of Missouri researcher. 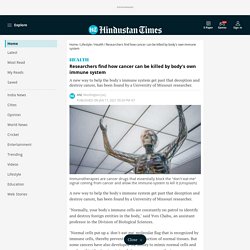 "Normally, your body's immune cells are constantly on patrol to identify and destroy foreign entities in the body," said Yves Chabu, an assistant professor in the Division of Biological Sciences. "Normal cells put up a 'don't-eat-me' molecular flag that is recognized by immune cells, thereby preventing the destruction of normal tissues. But some cancers have also developed the ability to mimic normal cells and produce this 'don't eat me' signal. As a consequence, the immune system fails to recognise cancer as a defective tissue and leaves it alone, which is bad news for the patient," added Chabu. Immunotherapies are cancer drugs that essentially block the "don't-eat-me" signal coming from cancer and allow the immune-system to kill it. Why an American went to Cuba for cancer care. Cuba has faced more than 50 years of US sanctions. 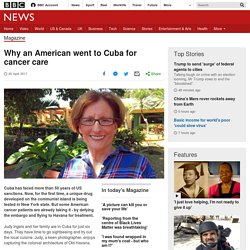 Now, for the first time, a unique drug developed on the communist island is being tested in New York state. But some American cancer patients are already taking it - by defying the embargo and flying to Havana for treatment. Judy Ingels and her family are in Cuba for just six days. They have time to go sightseeing and try out the local cuisine. Judy, a keen photographer, enjoys capturing the colonial architecture of Old Havana. And while she is in the country, Ingels, 74, will have her first injections of Cimavax, a drug shown in Cuban trials to extend the lives of lung cancer patients by months, and sometimes years.

By travelling to Havana from her home in California, she is breaking the law. The US embargo against Cuba has been in place for more than five decades, and though relations thawed under President Obama, seeking medical treatment in Cuba is still not allowed for US citizens. A cure for cancer? Israeli scientists say they think they found one - HEALTH & SCIENCE. A small team of Israeli scientists think they might have found the first complete cure for cancer. “We believe we will offer in a year’s time a complete cure for cancer,” said Dan Aridor, of a new treatment being developed by his company, Accelerated Evolution Biotechnologies Ltd. (AEBi), which was founded in 2000 in the ITEK incubator. AEBi developed the SoAP platform, which provides functional leads to very difficult targets.

“Our cancer cure will be effective from day one, will last a duration of a few weeks and will have no or minimal side-effects at a much lower cost than most other treatments on the market,” Aridor said. “Our solution will be both generic and personal.” Dr. It sounds fantastical, especially considering that an estimated 18.1 million new cancer cases are diagnosed worldwide each year, according to reports by the International Agency for Research on Cancer. Aridor, chairman of the board of AEBi and CEO Dr. Measles Virus Wipes Out Golf-Ball-Sized Cancer Tumor In 36 Hours. Brain-derived compounds show surprising—and beneficial—results for cancer in lab studies. A lab team led by Nobel Prize winner Dr. 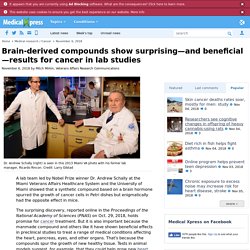 Andrew Schally at the Miami Veterans Affairs Healthcare System and the University of Miami showed that a synthetic compound based on a brain hormone spurred the growth of cancer cells in Petri dishes but enigmatically had the opposite effect in mice. The surprising discovery, reported online in the Proceedings of the National Academy of Sciences (PNAS) on Oct. 29, 2018, holds promise for cancer treatment. But it is also important because the manmade compound and others like it have shown beneficial effects in preclinical studies to treat a range of medical conditions affecting the heart, pancreas, eyes, and other organs. New cancer drug 93 percent effective with pediatric patients in clinical trial. March 30 (UPI) -- A new cancer drug called larotrectinib was effective in 93 percent of pediatric patients tested in a Phase 1 clincial trial, researchers announced. 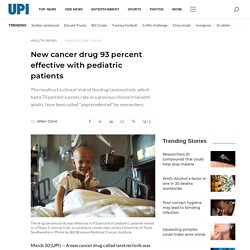 Larotrectinib is the first cancer drug to receive Food and Drug Administration breakthrough therapy designation for patients with a specific fusion of two genes in the cancer cell regardless of the type of cancer. "In some cancers, a part of the TRK gene has become attached to another gene, which is called a fusion," Dr. REOLYSIN® Topic: REOLYSIN® - A new experimental treatment for brain tumors.Interview conducted by: Al Musella, DPM President, Musella Foundation Date: 9/11/2002Guest Host: What is REOLYSIN® and how does it work? 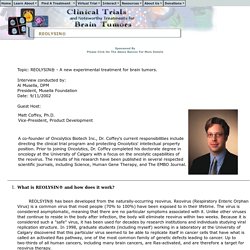 REOLSYIN® has been developed from the naturally-occurring reovirus. Reovirus (Respiratory Enteric Orphan Virus) is a common virus that most people (70% to 100%) have been exposed to in their lifetime. The virus is considered asymptomatic, meaning that there are no particular symptoms associated with it. Unlike other viruses that continue to reside in the body after infection, the body will eliminate reovirus within two weeks. Oncolytics Biotech Inc. 210, 1167 Kensington Crescent NW Calgary, Alberta, T2N 1X7 p. 403.670.7377 f. 403.283.0858 www.oncolyticsbiotech.com. REOLYSIN® Zytiga prescribing information.