If you choose to develop your own motion control algorithms but still use EtherCAT to simplify and support your network configuration, KINGSTAR Fieldbus powered by EtherCAT is the way to go. Real-Time PC-based Platform for Building Industrial Automation Applications. KINGSTAR PLC Software for Windows PC. Three Success Factors for Insuring Industry 4.0-enabled Machine Automation Can Deliver on the Promise of Mass Customization. Internet-era initiatives like Industry 4.0 and IoT are disruptive to the manufacturing shop floor but it does not compare to the monumental impact machine builders face if they want to remain competitive. 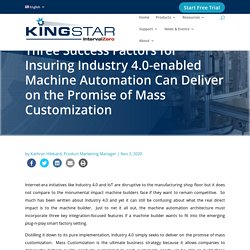 So much has been written about Industry 4.0 and yet it can still be confusing about what the real direct impact is to the machine builder. Just to net it all out, the machine automation architecture must incorporate three key integration-focused features if a machine builder wants to fit into the emerging plug-n-play smart factory setting. Distilling it down to its pure implementation, Industry 4.0 simply seeks to deliver on the promise of mass customization.

Mass Customization is the ultimate business strategy because it allows companies to deliver the highest quality products customized to each customer’s needs yet be able to build these customized products at mass produced prices. KINGSTAR Runtime Installation. Three Success Factors for Insuring Industry 4.0-enabled Machine Automation Can Deliver on the Promise of Mass Customization. Configuring Local Memory in RTX64. KINGSTAR PLC Software for Windows PC. KINGSTAR Motion Control for Windows PC. KINGSTAR Motion Control for Windows PC. RTX64 SDK Overview. EtherCAT-enabled Software-PLC Controller. Application in robotics In the Industry 4.0 era, robots seldom perform stand-alone operations like welding a seam on a car at a fixed point is space over and over and over again. 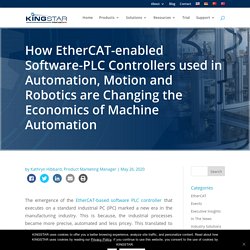 Robots are being integrated into a workcell or as part of an entire line automation process. This ultimately requires line control somewhat like a traffic police and the PLC serves at the coordinator that lets the robot integrate with vision systems and with other machinery and conveyors. Thus, today’s robotics are designed to be compatible with the software PLC controller.

Meaning that, a group of robots can function effectively and independently from a single centralized PLC. Most independently driven robots use a single station touchscreen solution that allows easy and quick modification of PLC functions to suit the functions of associated industrial robotics. Benefits of Real-time EtherCAT Automation Applications. EtherCAT speed and deterministic operation EtherCAT is based on fast “Ethernet on the fly” processing. 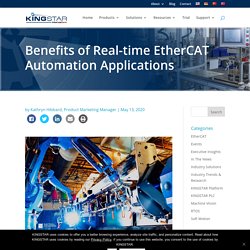 In a traditional Ethernet network, Ethernet frames (or data packets) are sent to each device; the device then reads the data and sends back a response to the master. This process is repeated for each device in the network until all devices are updated. The total network cycle time is the sum of all the response times and is not deterministic. At times, multiple device messages interrupt one another — requiring the master to arbitrate and organize according to priority and adding delay to the cycle time. In contrast, an EtherCAT network works more efficiently: A frame is sent from the master and when the first slave device receives the frame, it instantly extracts the data with its address and writes any response data. EtherCAT: Tight synchronization Low cost — EtherCAT takes advantage of the mass-produced Ethernet communication devices and cables used by all PCs to minimize cost. RTX64 Vision Overview. Configuring Local Memory in RTX64. Real-time EtherCAT Automation Applications. 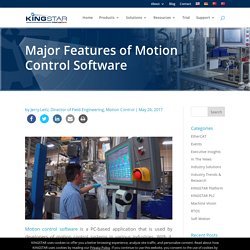 Since it can be easily integrated into the PC, you will not incur higher costs experienced when using motion control hardware like you do with Galil, Delta Tau, Advantech, and others. There are numerous benefits that can be achieved with KINGSTAR Soft Motion. iBase - Robots Conveying Digital Signage Using KINGSTAR EtherCAT. Industrial Software Automation Testing.