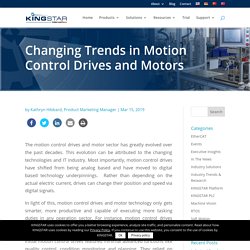 This evolution can be attributed to the changing technologies and IT industry. Most importantly, motion control drives have shifted from being analog based and have moved to digital based technology underpinnings. Rather than depending on the actual electric current, drives can change their position and speed via digital signals. In light of this, motion control drives and motor technology only gets smarter, more productive and capable of executing more tasking duties in any operation sector.

For instance, motion control drives were initially used for a single purpose which was; directing currents to the motor as instructed by the motion controller. Replace Your Machine Vision Hardware with Software at Half the Cost. EtherCAT-enabled Software PLC for Real-Time Motion Control and Machine Vision. KINGSTAR Demo Tutorial - Intro to KINGSTAR PLC. 8 Critical Considerations for RTOS Selection. KINGSTAR 3.6 is Now Live: What You Need to Know. We’re pleased to announce that our latest release, KINGSTAR 3.6, is now available. 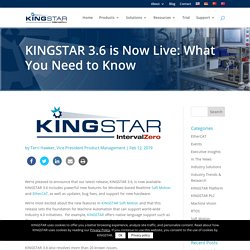 KINGSTAR 3.6 includes powerful new features for Windows-based Realtime Soft Motion and EtherCAT, as well as updates, bug fixes, and support for new hardware. We’re most excited about the new features in KINGSTAR Soft Motion and that this release sets the foundation for Machine Automation that can support world-wide Industry 4.0 initiatives.

For example, KINGSTAR offers native language support such as Chinese. In addition, KINGSTAR PLC now supports Symbolic constants, in the size of Array/Matrix variables and has an improved sample program. Benefits of Automation. Automation is the application of technology to execute tasks and reduce human input especially in production and manufacturing industries. 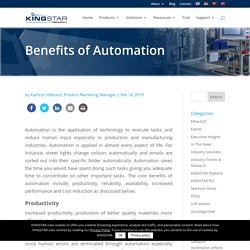 Automation is applied in almost every aspect of life. For instance, street lights change colours automatically and emails are sorted out into their specific folder automatically. Automation saves the time you would have spent doing such tasks giving you adequate time to concentrate on other important tasks. The core benefits of automation include; productivity, reliability, availability, increased performance and cost reduction as discussed below. Productivity Increased productivity, production of better quality materials, more efficient use of production materials and decreased factory lead times are some of the main benefits attributed to automation.

Worker safety Though greatly overlooked, worker safety is an important automation benefit especially among industries. How Industrial Software Automation Affects Processes. Software automation is defined as the use of instructions to develop a repeated process that executes the manual work of an employee/IT professional in cloud deployments and data centres. 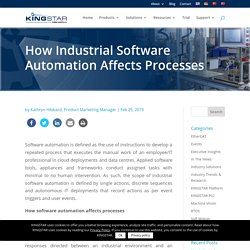 Applied software tools, appliances and frameworks conduct assigned tasks with minimal to no human intervention. As such, the scope of industrial software automation is defined by single actions, discrete sequences and autonomous IT deployments that record actions as per event triggers and user events. Balance Flexibility and Performance with KINGSTAR EtherCAT. What is RTOS Task Scheduling Techniques. The RTOS task scheduling policy is based on an algorithm used by its scheduler to determine which task gets executed at a given time. 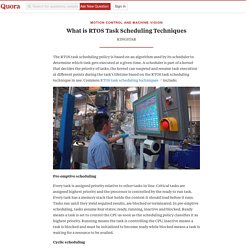 A scheduler is part of a kernel that decides the priority of tasks; the kernel can suspend and resume task execution at different points during the task’s lifetime based on the RTOS task scheduling technique in use. Common RTOS task scheduling techniques include; Pre-emptive scheduling Every task is assigned priority relative to other tasks in line. Machine Vision Platforms – Kingstar. Typically, real-time machine vision implementation was carried out different physical platforms like; multi-camera 2D applications, PC based systems, simple vision sensors, image-based barcode readers, 3D vision controllers and standalone vision systems. 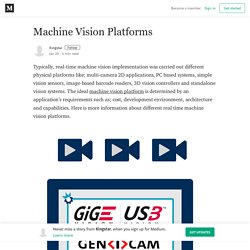 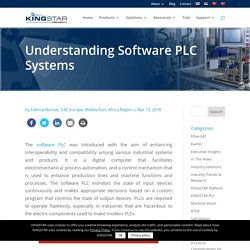 Before its invention, the safety interlock, control and sequencing logic among manufacturing lines depended on hundreds or thousands of relays, drum sequencers, cam timers and dedicated closed-loop controllers. The relay systems were unreliable because they often failed and caused delays. In such scenarios, engineers were forced to troubleshoot the entire relay’s wall in a bid to find and fix problems. Additionally, system updates were tedious because technicians had to separate and rewire each relay manually. Hardware A basic PLC must be flexible and configurable to meet different application needs. 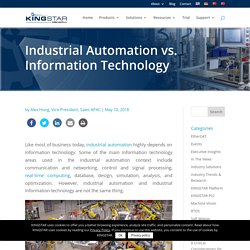 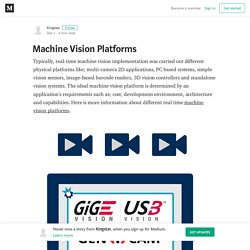 The ideal machine vision platform is determined by an application’s requirements such as; cost, development environment, architecture and capabilities. Here is more information about different real time machine vision platforms. The best in class vision systems in current systems combine the vision system with the machine automation on the same PC. By combining the two controllers on a single platform, the integration is simplified and the performance is dramatically improved. Choosing Motion Controllers. Motion controllers are the primary intelligence within industrial machines. 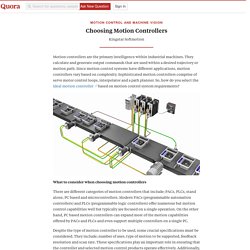 You can churn out code with a basic input and output signals outline. Moreover, most ladder diagram implementations allow organization of programs into subprograms or folders that can be downloaded to the PLC to ensure easy segmentation. As such, the ladder diagram language is ideal for simple material handling applications. Function block diagram Function block diagram is the second most widely used PLC programming language.

Sequential function chart Sequential function chart is similar to computer flowcharts. Instruction list Instruction list programming is similar to microprocessor programming and assembler language programming. Structured text Structured text resembles high-level computer languages like C and PASCAL. 8 Critical Considerations for RTOS Selection. A real-time operating system (RTOS) is typically an option for most embedded projects. But is it always necessary? To answer this, you must carefully analyze and understand what an application is mandated to deliver to determine whether using an RTOS is an “extra” or a project requirement. Most embedded project programmers are not familiar with RTOS requirements and constraints.

As a result, selection of an RTOS is often based on a programmer’s familiarity and comfort with the product as well as its performance. Unfortunately, this criteria is not usually sufficient. Cost-effective Soft PLC (Programmable logic controllers) by KINGSTAR. Setting up a Machine Vision System for Robotics-Based Manufacturing. There are numerous things that should be considered when setting up a machine vision robotic manufacturing system, including these four steps. Determining camera resolution and lighting requirements The ideal camera resolution is determined by the field of view or area the camera must focus on and how accurately the robot should be positioned in order to locate required features. As such, large fields of view that require precise positioning must use a high camera resolution. However, higher camera resolutions require longer image processing durations and expensive hardware. Most machine visions systems require an effective and dedicated source of lighting that minimizes image variations and accentuates product features like unique marks or edges that the camera is trying to capture.

Configuring the system Robot control software, image processing software, the user interface and communication between the camera, robot and host PC must be configured accordingly. Motion Control Classified: 3 Common Types of Motion Controllers. A motion controller is the center of a motion control system that works with the central logic control unit as its core, the motor as its controlled object, and the sensor as the feedback signal sensitive component. However, its main task is to perform required mathematical and logic operations as per sensor signals and control task requirements.

It also provides appropriate driving device control signals. Motion controllers can be classified into three types: Machine Vision and Medical Imaging Software by Kingstar. The Past, Present, and Future of Industrial Manufacturing Automation. Current state of industrial automation in the manufacturing sector Although most manufacturing industrial automation concepts are yet to be implemented fully (like the lights out concept, which envisioned an industrial setting where lights are switched off, leaving robots to do all the work), there has been remarkable progress since the 1980s.

Based on its inputs and outputs, a PLC can easily monitor and record runtime data like operating temperature, machine productivity, generation of alarms when a machine fails, automatic start and stop processes and more. This means that PLCs are robust and flexible manufacturing process control solutions that are adaptable to most applications. Why you should consider using motion control software. Real-Time Machine Vision Software. The Critical Case for the Intelligent Edge. Get Benefited of All the Software Solution to Motion Control with KINGSTAR. Factors That Determine the Imperative Need for Software Machine Automation. Windows PC-based Automation. Key Benefits of Industrial Machine Automation Solutions. Key Benefits of Industrial Machine Automation Solutions. Choosing the Best Machine Vision Technique for Robot Guidance.

There are numerous approaches to robot guidance using machine vision techniques, such as stereo vision and photogrammetry, time of flight, structured light, light coding, and laser triangulation. The technique ideal for a specific application depends on its requirements. To determine the ideal machine vision technique to apply, consider the application’s goal and its type of robot, as well as factors including: The range of the sensor: The working distance is determined by environment configuration, accessibility of the robot, and size of the sensor.The accuracy of resolution and point cloud alignment: Resolution and point cloud alignment are determined by the hardware.

They should be consistent with the application purpose and size of the object.Light weight: If a sensor is mounted in the end effector or on-board, a robot operates on limited max load weight to achieve its full dynamics. These factors are a starting point for selecting the ideal technique for an industrial application. Understanding the Basics of PLCs.

The early years of automation In 1913, Ford Motor Company introduced a car production assembly line which is considered one of the pioneer types of automation in the manufacturing industry. Before then, a car was built by a team of skilled and unskilled workers. KINGSTAR. Real-Time Machine Vision Software. How to Gain Long-term Value from Industrial Automation. KINGSTAR. How IntervalZero RTX Transforms Windows into an RTOS. Why Soft Motion Is the Best Motion Controller on the Market. Machine Vision: Software Tool for Developing Software Application. Software-Based Motion Delivers Performance, Flexibility. Software-Based Motion Delivers Performance, F... What’s the Difference between Automation and Robotics? Get Several Solutions by KingStar for Your Industry to Work Smart. Benefits of Industrial Automation in Electronic Manufacturing. Benefits of Software Motion Control.