The CIA Is Investing in Firms That Mine Your Tweets and Instagram Photos. SOFT ROBOTS THAT can grasp delicate objects, computer algorithms designed to spot an “insider threat,” and artificial intelligence that will sift through large data sets — these are just a few of the technologies being pursued by companies with investment from In-Q-Tel, the CIA’s venture capital firm, according to a document obtained by The Intercept. 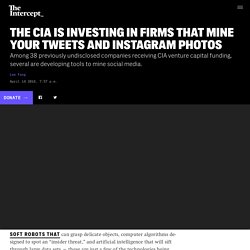 Yet among the 38 previously undisclosed companies receiving In-Q-Tel funding, the research focus that stands out is social media mining and surveillance; the portfolio document lists several tech companies pursuing work in this area, including Dataminr, Geofeedia, PATHAR, and TransVoyant. In-Q-Tel’s investment process. Screen grab from In-Q-Tel’s website. The CIA Is Investing in Firms That Mine Your Tweets and Instagram Photos. Barack Obama Never Said Money Wasn’t Corrupting; In Fact, He Said the Opposite. DURING THURSDAY’S DEMOCRATIC debate in Brooklyn, Bernie Sanders asked this question about Hillary Clinton: “Do we really feel confident about a candidate saying that she’s going to bring change in America when she is so dependent on big money interests?” 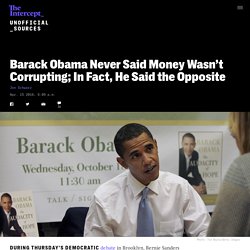 Clinton’s response was to invoke Barack Obama. “Make no mistake about it, this is not just an attack on me, it’s an attack on President Obama,” she said. “President Obama had a Super PAC when he ran. The Panama Papers prove it: we can afford a universal basic income. We should all be able to agree: no one should be poor in a nation as wealthy as the US. 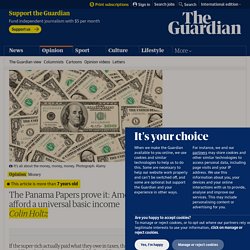 Yet nearly 15% of Americans live below the poverty line. Perhaps one of the best solutions is also one of the oldest and simplest ideas: everyone should be guaranteed a small income, free from conditions. Called a universal basic income by supporters, the idea has has attracted support throughout American history, from Thomas Paine to Martin Luther King Jr. But it has also faced unending criticism for one particular reason: the advocates of “austerity” say we simply can’t afford it – or any other dramatic spending on social security. The Power Players · ICIJ. How to Hack an Election. Andrés Sepúlveda rigged elections throughout Latin America for almost a decade. 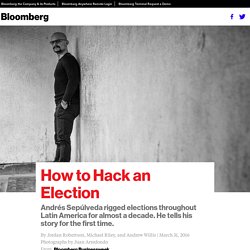 He tells his story for the first time. By Jordan Robertson, Michael Riley, and Andrew Willis | March 31, 2016 Photographs by Juan Arredondo From It was just before midnight when Enrique Peña Nieto declared victory as the newly elected president of Mexico.