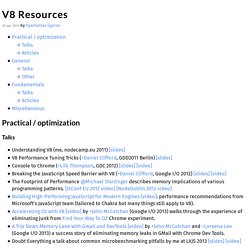 The Hitchhiker's Guide to Modern JavaScript Tooling - React Kung Fu. A lot of developers coming to JavaScript world attracted by React.js are confused with the tooling used to produce modern JavaScript code. 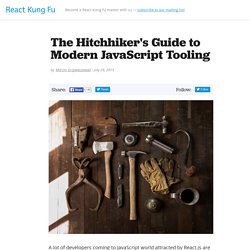 Webpack, Babel, ESLint, Mocha, Karma, Grunt… what should I use and which tool is doing what? JavaScript newcomers are often people coming from communities like Ruby and Java where opinionated, full-stack solutions exist. Frameworks like Ruby on Rails provide a lot of features out of the box - in fact the problem you may have with JavaScript is caused by that. Semantic-Org/Semantic-UI · GitHub. The web's scaffolding tool for modern webapps. Swagger-api/swagger-spec · GitHub. 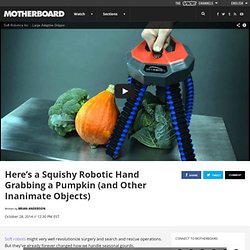 But they’ve already forever changed how we handle seasonal gourds. At least, that’s what you’re looking at in this demo video for a new adaptive gripping platform from Soft Robotics Inc., a Boston-based start up specializing in “rubbery robots” that can be could be used during surgery and various other biomedical applications. To demonstrate the sort of adroitness that Soft Robotics is after, the company set its modular, interchangeable graspers loose of a range of objects, from the pliant (heads of fresh produce) to the cumbersome (pumpkins, pufferfish). “We thought, ‘What’s the scariest thing you could grab with your bare hands?’” 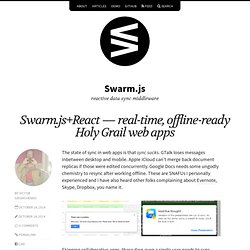 GTalk loses messages inbetween desktop and mobile. Apple iCloud can’t merge back document replicas if those were edited concurrently. Google Docs needs some ungodly chemistry to resync after working offline. These are SNAFUs I personally experienced and I have also heard other folks complaining about Evernote, Skype, Dropbox, you name it. Skipping collaborative apps, these days even a single user needs to sync his/her devices (see continuity). Popular solutions suck for one simple reason: common sense fails us in distributed systems. In 2013, we released the 0.1 version of Swarm, which was, basically, some slap-together per-column last-write-wins solution, like Firebase and many others are using. The result was like magic. Building Web Apps with Go.

Rmdir/sthttpd · GitHub. Dropwizard Core. The dropwizard-core module provides you with everything you’ll need for most of your applications. 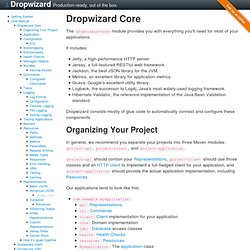 It includes: Jetty, a high-performance HTTP server.Jersey, a full-featured RESTful web framework.Jackson, the best JSON library for the JVM.Metrics, an excellent library for application metrics.Guava, Google’s excellent utility library.Logback, the successor to Log4j, Java’s most widely-used logging framework.Hibernate Validator, the reference implementation of the Java Bean Validation standard. Dropwizard consists mostly of glue code to automatically connect and configure these components. Organizing Your Project In general, we recommend you separate your projects into three Maven modules: project-api, project-client, and project-application. Atom. Apache Usergrid (incubating) — the BaaS not made for Hipsters. Storing hundreds of millions of simple key-value pairs in Redis. Brikis98/ping-play · GitHub. Community. 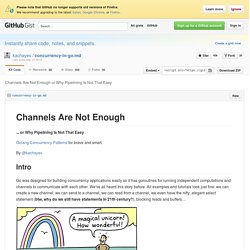 By @kachayev Intro. Chartist - Simple responsive charts. You may think that this is just yet an other charting library. 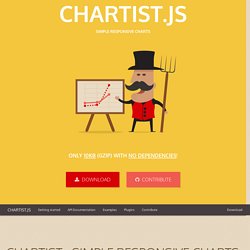 But Chartist.js is the product of a community that was disappointed about the abilities provided by other charting libraries. User Experience (UX) Design Learning Path by Julia DeBari. Introduction This Learning Path is a curriculum of UX Design courses, videos and resources from across the internet, organized into a logical sequence that a beginner can follow. 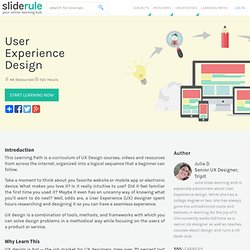 Take a moment to think about you favorite website or mobile app or electronic device. What makes you love it? Is it really intuitive to use? Did it feel familiar the first time you used it? UX design is a combination of tools, methods, and frameworks with which you can solve design problems in a methodical way while focusing on the users of a product or service. 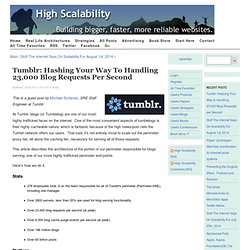 At Tumblr, blogs (or Tumblelog) are one of our most highly trafficked faces on the internet. One of the most convenient aspects of tumblelogs is their highly cacheable nature, which is fantastic because of the high views/post ratio the Tumblr network offers our users. That said, it's not entirely trivial to scale out the perimeter proxy tier, let alone the caching tier, necessary for serving all of those requests. Backend Teardown: Muut - ScaleScale. Muut’s Stack #StatPorn 440M API calls/month4 ms average response5% capacity, peaks @ 10%37,000 communities410,000 users7000kb JSON data /sec27 languages9 distributed team members Compute. 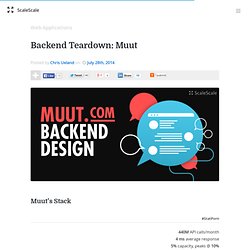 Dot-net-article/part1.md at master · HenrikJoreteg/dot-net-article. Performance is a Feature. We've always put a heavy emphasis on performance at Stack Overflow and Stack Exchange. Not just because we're performance wonks (guilty!) , but because we think speed is a competitive advantage. There's plenty of experimental data proving that the slower your website loads and displays, the less people will use it.

[Google found that] the page with 10 results took 0.4 seconds to generate. The page with 30 results took 0.9 seconds. Tobyhede/gorms. Othree/node-r3. Fantastic Micro-Frameworks and Micro-Libraries for Fun and Profit! Rasbt/python_reference. JSONDoc. Sandman.io. Value at Risk (VaR) for Algorithmic Trading Risk Management - Part I - QuantStart. Estimating the risk of loss to an algorithmic trading strategy, or portfolio of strategies, is of extreme importance for long-term capital growth. Many techniques for risk management have been developed for use in institutional settings.

One technique in particular, known as Value at Risk or VaR, will be the topic of this article. We will be applying the concept of VaR to a single strategy or a set of strategies in order to help us quantify risk in our trading portfolio. Create a free website. Chrome Release Channels. Chrome supports a number of different release channels. We use these channels to slowly roll out updates to users, starting with our close to daily Canary channel builds, all the way up to our Stable channel releases that happen every 6 weeks roughly. Channels Windows 64-bit. Ngrok - secure introspectable tunnels to localhost. Leaf 0.1 ALPHA - CSS Framework. Examples · Ratchet. Checkout out the examples on a desktop browser or visit on your mobile device see the apps as intended. Movie finder iOS mail app Android notes app. Highcharts - Interactive JavaScript charts for your webpage.

Developing Backbone.js Applications - By Addy Osmani (@addyosmani) Available free for open-source reading below or for purchase via the O'Reilly store. Pull requests and comments always welcome. Prelude Not so long ago, “data-rich web application” was an oxymoron. Today, these applications are everywhere and you need to know how to build them. Traditionally, web applications left the heavy-lifting of data to servers that pushed HTML to the browser in complete page loads.

Think of the Ajax shopping cart which doesn’t require a refresh on the page when adding an item to your basket. Anti-Patterns in Python Programming - Constantine Lignos. This page is a collection of the most unfortunate but occasionally subtle issues I've seen in code written by students new to writing Python. Hacking, Distributed. The elements of HTML. The March Towards Go - Zef.me. Full Stack Python. Read Your First Meteor Application. 1 Introduction There’s a lot to love about the Meteor JavaScript framework: You can build entire web applications with nothing but JavaScript. Your applications are real-time by default, similar to desktop applications. There’s a large and helpful community to help you along the way. Joel on Software.

Paul Graham. Get Your Development Team Started With Go. June 30, 2014 · 5 Comments Here at DigitalOcean, Go is quickly becoming one of our favorite programming languages. After a few internal debates, I’ve distilled a few thoughts that I'd like to share with teams new to Go (or thinking of taking it on in the future).

Linked Data - Connect Distributed Data across the Web. Draw Freely. Some Collection Of Links. Epoch by Fastly. Supernova from IT Conversations. Zappa: CoffeeScript-optimized interface for building web apps on Node.js with Express and Socket.IO. Camlistore. Design & Implementation of a Win32 Text Editor. The Craft of Text Editing. FLTK 1.3.2: FLTK Programming Manual. Technical HOWTOs. Sandbox telegrams, or, how your Chrome extension can interact with page content scripts In AdGrok’s GrokBar, we inject a “heads-up display” on pages that the user is advertising. Set Up Web Starter Kit — Web Fundamentals. Videogrep: Automatic Supercuts with Python – Sam Lavigne. Videogrep is a python script that searches through dialog in videos and then cuts together a new video based on what it finds.

Thinking of U and I - vaadin.com. JSONLint - The JSON Validator. Swiftype: Modern full-text search for websites and applications. Home of free code snippets for Bootstrap. Top 10 Resources for Bootstrap Themes. 10 Prototyping Apps for Bootstrap 3. I continue to come across all of these amazing Bootstrap apps, libraries and plugins, and feel obliged to continue sharing more.

I’ve written a few pieces on Bootstrap already, the post about Icon Fonts for Bootstrap, and also the top free resources for Bootstrap themes. It appears that the demand was there, and people actually enjoyed learning more about their favorite development framework.