My-Poetry-Vocab-grade-10.docx. Literary Devices. The Brontë sisters. Media Archive - Thornton Wilder. An Animated Introduction to Virginia Woolf. It’s a pity writer Virginia Woolf (1882-1941) drowned herself before the advent of the Internet. 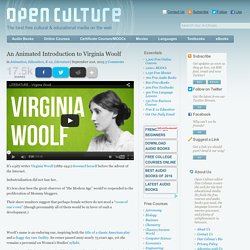 Industrialization did not faze her. It’s less clear how the great observer of “the Modern Age” would’ve responded to the proliferation of Mommy bloggers. Their sheer numbers suggest that perhaps female writers do not need a “room of one’s own” (though presumably all of them would be in favor of such a development.) Woolf’s name is an enduring one, inspiring both the title of a classic American play and a doggy day care facility. Its owner passed away nearly 75 years ago, yet she remains a perennial on Women’s Studies’ syllabi.

Ergo, it’s possible for the general public to know of her, without knowing much of anything about her and her work. Arrange whatever pieces come your way. – Virginia Woolf. Archive of Recorded Poetry and Literature. Listen to audio-recorded readings of former Consultants in Poetry Elizabeth Bishop, Gwendolyn Brooks and Robert Frost; Nobel Laureates Mario Vargas Llosa and Czeslaw Milosz, and renowned writers such as Ray Bradbury, Margaret Atwood, and Kurt Vonnegut read from their work at the Library of Congress. 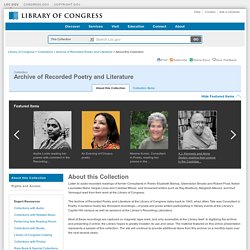 The Archive of Recorded Poetry and Literature at the Library of Congress dates back to 1943, when Allen Tate was Consultant in Poetry. It contains nearly two thousand recordings—of poets and prose writers participating in literary events at the Library’s Capitol Hill campus as well as sessions at the Library’s Recording Laboratory. Most of these recordings are captured on magnetic tape reels, and only accessible at the Library itself. In digitizing the archive and presenting it online, the Library hopes to greatly broaden its use and value. 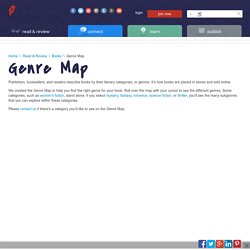 It's how books are placed in stores and sold online. We created the Genre Map to help you find the right genre for your book. Roll over the map with your cursor to see the different genres. Literary and Critical Terms. What the English of Shakespeare, Beowulf, and King Arthur actually sounded like. Let's hop into a time machine and go back to the England of yore! 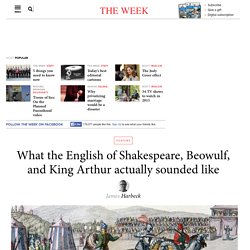 If this were a movie, no matter when we got out of the machine, we could walk up to people and start talking. It could be medieval times or the age of King Arthur's round table, and they'd just say, "Who art thou, varlet? " Free books: 100 legal sites to download literature. The Classics Browse works by Mark Twain, Joseph Conrad and other famous authors here. 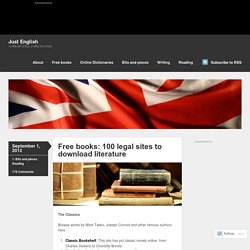 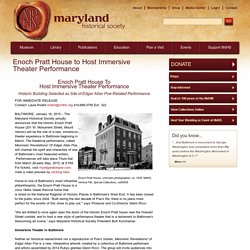 Monument Street, Mount Vernon) will be the site of a new, immersive theater experience in Baltimore beginning in March. The theatrical performance, called Mesmeric Revelations! Home to one of Baltimore’s most influential philanthropists, the Enoch Pratt House is a circa 1840s Greek Revival home that is listed on the National Register of Historic Places in Baltimore’s West End. “We are thrilled to once again open the doors of the historic Enoch Pratt house near the Howard Street corridor, and to host a new style of performance theater that is a testament to Baltimore’s blossoming art scene,” says Maryland Historical Society President Burt Kummerow.

Poem Zoom – Thousands of Poems and Poets. Digital Poets! Web Tools, Apps, & Lesson Ideas. “Poetry is when an emotion has found its thought and the thought has found words.” by Robert Frost April is National Poetry month. 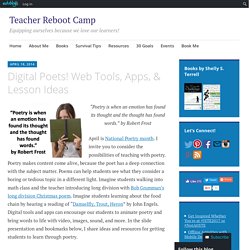 I invite you to consider the possibilities of teaching with poetry. Poetry makes content come alive, because the poet has a deep connection with the subject matter. Poems can help students see what they consider a boring or tedious topic in a different light. Imagine students walking into math class and the teacher introducing long division with Bob Grumman’s long division Christmas poem. Lesson Ideas Here are a few lesson ideas I talked about during my presentation. Resources. Animation.  Moving poems. Moving. Poems. Arts - Poetry. Poetry 180 - List of All Poems (Library of Congress) Writers and poets. English Timeline. This interactive timeline allows you to explore the evolution of English language and literature, from the 11th century to the present day. 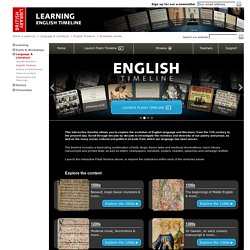 Scroll through decade by decade to investigate the richness and diversity of our poetry and prose, as well as the many social, cultural and political strands from which our language has been woven. The timeline includes a fascinating combination of texts: Anglo Saxon tales and medieval illuminations; iconic literary manuscripts and printed texts; as well as letters, newspapers, handbills, posters, charters, speeches and campaign leaflets. Launch the interactive Flash timeline above, or explore the collections within each of the centuries below. Beowulf, Anglo Saxon monsters & more... The beginnings of Middle English & more... The Guardian launches an interactive literary map of the UK. New England Interactive Literature. British and American literature. American and British Literature: Compared and Contrasted. British Literature timeline. Search › english american literature timeline. Literary History Timeline. Brief Timeline of American Literature and Events: 1750-1759.