11 books that will make you smarter about politics. BookFinder.com: New & Used Books, Rare Books, Textbooks, Out of Print Books. Of Thee I Read: The United States in Literature. In my hometown, Elgin, Neb., a hand-lettered sign along the highway that runs through the business district lists the names of the sons and daughters who have left to join the military. 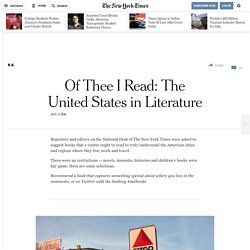 It is the town’s way of saying: We will keep you close in our hearts and will not forget you. Remembering those in uniform is as much a part of the Midwest culture today as it was during World War II, when the women around North Platte, Neb., started a canteen at the train depot and fed nearly six million soldiers who passed through on their way to the fighting in the Pacific or in Europe. Want to Work in 18 Miles of Books? First, the Quiz - The New York Times. In recent years, much has changed at the Strand. 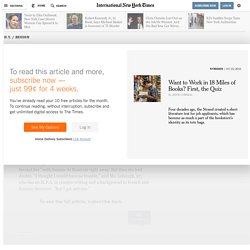 The motto went from “8 miles of books” to “18 miles of books” after an expansion and remodeling in 2005. The store added miles of merchandise, too, from a Strand-branded hat line to Moleskine notebooks and Pocky snack sticks. Perhaps most significantly, for broiling employees, the place finally got central air-conditioning, also in 2005. (“I hated it,” said Mr. Bass.) Österreichische Nationalbibliothek - Austrian National Library.

The Forbidden Road - Effie Adelaide Rowlands. Book Reviews, Bestselling Books & Publishing Business News. Story Cartel. Story Cartel. Latest Deals. So many books, so little time... About Books - journals, blogs, conversation. Authors. Short Stories. Book covers and Illustrations. Books Online. 5 Amazing Libraries You Didn't Know You Had Access To. Suz Massen, Chief of Public Services at the Frick Art Reference Library was gracious enough to come in and speak to my Intro to Reference class at Pratt Institute this week and I was surprised and excited to find out that the Frick Library is freely available to the public! 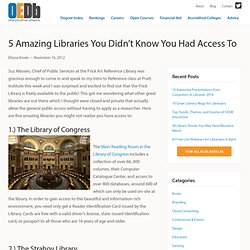 This got me wondering what other great libraries are out there which I thought were closed and private that actually allow the general public access without having to apply as a researcher. Here are five amazing libraries you might not realize you have access to: 1.) The Library of Congress The Main Reading Room in the Library of Congress includes a collection of over 66, 000 volumes, their Computer Catalogue Center, and access to over 800 databases, around 600 of which can only be used on-site at the library. 2.)

10-10-10 Reading Challenge. Books reading and writing. Books & Literature. Books Links. 33 Of The Most Bizarre Books In The History Of Amazon. I KNEW it. 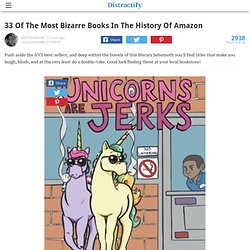 Some jail time required. 10 Beautiful Opening Lines of Books Will Remind You What Fantastic Writing Looks Like. Barnes & Noble on the Brink. September 10th, 2014 | Hugh C. 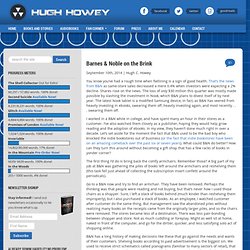 Howey You know you’ve had a rough time when flatlining is a sign of good health. That’s the news from B&N as same-store sales decreased a mere 0.4% when investors were expecting a 2% decline. Shares rose on the news. The loss of only $30 million this quarter was mostly made possible by slashing the investment in Nook, which B&N plans to divest itself of by next year. 10 Novels That Are Scarier Than Most Horror Movies. Ligonier. It seems that every time a writer picks up a pen or turns on his word processor to compose a literary work of fiction, deep in his bosom resides the hope that somehow he will create the Great American Novel. 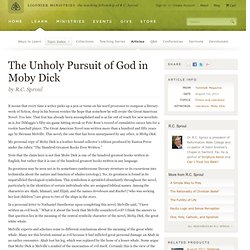 Too late. That feat has already been accomplished and is as far out of reach for new novelists as is Joe DiMaggio’s fifty-six-game hitting streak or Pete Rose’s record of cumulative career hits for a rookie baseball player. The Great American Novel was written more than a hundred and fifty years ago by Herman Melville. Five Banned Books That You Should Read (That You Probably Haven't) This week is Banned Books Week, where librarians and other organizations highlight the books that have been subjected to threats of censorship – and actual censorship – in schools, libraries and nations around the globe. 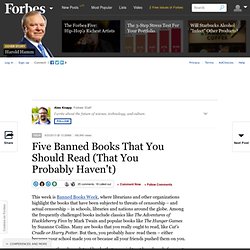 Among the frequently challenged books include classics like The Adventures of Huckleberry Finn by Mark Twain and popular books like The Hunger Games by Suzanne Collins. Many are books that you really ought to read, like Cat’s Cradle or Harry Potter. But then, you probably have read them – either because your school made you or because all your friends pushed them on you.

In between, though, are lots of books that you might not have heard of – or, at the very least, heard of but weren’t required to read when you were in school. With that in mind, I’ve created a list of five challenged or banned books that you probably haven’t read. Our Family Tree: An Evolution Story by Lisa Westberg Peters Killer Quote: ”When we began, we didn’t look like people. Little Free Library  - Home Page. Making of the Christian Imagination. When I Stop Believing in Fiction. Like a late victorian clergyman sweating in the dark over his Doubts, I have moments when my faith in fiction falters and then comes to the edge of collapse. 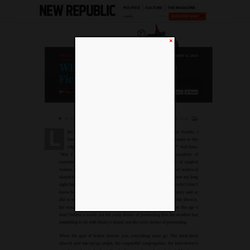 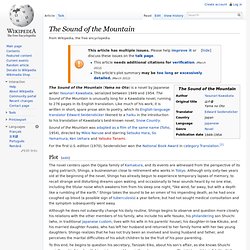 The Sound of the Mountain is unusually long for a Kawabata novel, running to 276 pages in its English translation. Like much of his work, it is written in short, spare prose akin to poetry, which its English-language translator Edward Seidensticker likened to a haiku in the introduction to his translation of Kawabata's best-known novel, Snow Country. Invitation to World Literature. Greek, by Euripides, first performed in 405 BCE The passionate loves and longings, hopes and fears of every culture live on forever in their stories. 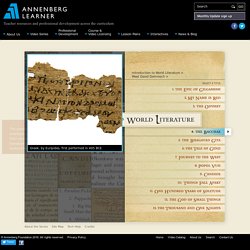 Literature-Map. Precision Book Search. Literature Project. The Johns Hopkins Guide to Literary Theory and Criticism. Bookreporter.com. Luminarium: Anthology of English Literature. Pride and Prejudice by Jane Austen. 6 Books to Kick Off Post-College Learning. This piece was written by Noodle VP of Operations Adam Shapiro. You went to a good college. Learned a lot. (Certainly paid a lot.) Unit 3: The Nature of Identity. The Best 100 Opening Lines From Books. Glynisj added: The 50 Best First Sentences in Fiction. Rare 1959 Audio: Flannery O’Connor Reads ‘A Good Man is Hard to Find’ Flannery O'Connor was a Southern writer who, as Joyce Carol Oates once said, had less in common with Faulkner than with Kafka and Kierkegaard.

Isolated by poor health and consumed by her fervent Catholic faith, O'Connor created works of moral fiction that, according to Oates, “were not refined New Yorker stories of the era in which nothing happens except inside the characters' minds, but stories in which something happens of irreversible magnitude, often death by violent means. " A Bibliophile's Defense of Physical Books. The committed bibliophile is cousin to the obsessive, an easily seduced accumulator frequently struck with frisson.