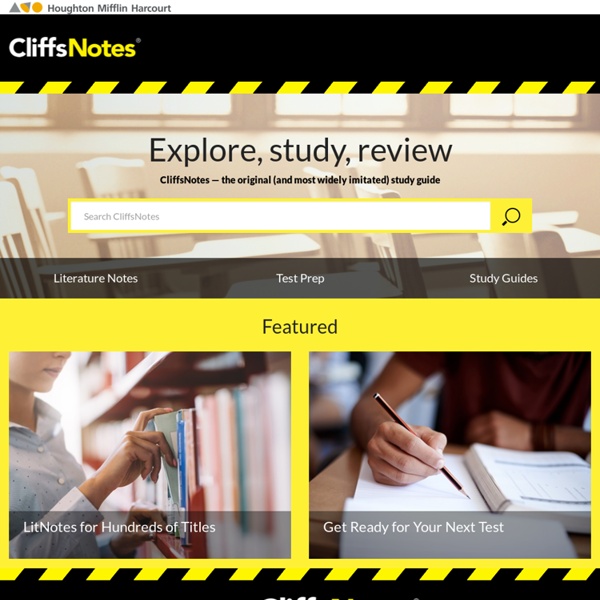 Investigating the Criminal Mind at the Crime Library While it appears to be true that some people who immerse in horror imagery feel provoked to commit the same aggressive crimes they just viewed, it's also true that there is no evidence of a causal factor, and millions of people watch such films without feeling instigated to act. Some people process external images into aggressive behavior, others might gain catharsis, and still others remain altogether unaffected. A few become horror film makers or novelists. It's not easy to know just what effect a specific film might have. Whatever results, research shows that it has more to do with the viewer than the material viewed.

40 websites that will make you cleverer right now The indexed web contains an incredible 14 billion pages. But only a tiny fraction help you improve your brain power. Here are 40 of the best. whizzpast.com – Learn about our awe inspiring past all in one wonderful place. Applied behavior analysis Applied behavior analysis (ABA), previously known as behavior modification,[1] is the application of operant and classical conditioning that modifies human behaviors, especially as part of a learning or treatment process. Behavior analysts focus on the observable relationship of behavior to the environment, including antecedents and consequences, without resort to "hypothetical constructs".[2] By functionally assessing the relationship between a targeted behavior and the environment, the methods of ABA can be used to change that behavior. Methods in applied behavior analysis range from validated intensive behavioral interventions—most notably utilized for children with an autism spectrum disorder (ASD)[3]—to basic research which investigates the rules by which humans adapt and maintain behavior. Definition[edit]

Five degrees you can earn from anywhere By Andrea Duchon Has earning your degree been on your New Year's resolution list for a while now, but your schedule doesn't seem to allow you time to physically go to school? You may want to consider earning your degree online. That's because an online education offers flexibility of schedule and the convenience to take a class anytime, anywhere.

700 Free Online Courses from Top Universities Take online courses from the world's top universities for free. Below, you will find 1,500 online courses from universities like Stanford, Yale, MIT, Harvard, Oxford and more. You can use this collection of online courses to learn everything you want--from history, philosophy and literature, to physics, biology, psychology, and computer science. Note: This page includes a lot of Massive Open Online Courses (MOOCs). If you want to enroll in a free version of a MOOC, please select the "Full Course, No Certificate" (edX) or "Audit" (Coursera) option. If you opt to take the course for a certificate/credential, you will be charged a fee, and we will receive a commission from our affiliate partners--Coursera, FutureLearn and edX.

Schema (psychology) In psychology and cognitive science, a schema (plural schemata or schemas) describes an organized pattern of thought or behavior that organizes categories of information and the relationships among them.[1] It can also be described as a mental structure of preconceived ideas, a framework representing some aspect of the world, or a system of organizing and perceiving new information.[2] Schemata influence attention and the absorption of new knowledge: people are more likely to notice things that fit into their schema, while re-interpreting contradictions to the schema as exceptions or distorting them to fit. Schemata have a tendency to remain unchanged, even in the face of contradictory information. Schemata can help in understanding the world and the rapidly changing environment.[3] People can organize new perceptions into schemata quickly as most situations do not require complex thought when using schema, since automatic thought is all that is required.[3] Main article: Schema Therapy

Out of Character: The Psychology of Good and Evil by Maria Popova What Aristotle has to do with Tiger Woods and the story of the world. The dichotomy of good and evil is as old as the story of the world, and timeless in its relevance to just about everything we do in life, from our political and spiritual views to our taste in music, art and literature to how we think about our simple dietary choices. But while most of us recognize that these concepts of good and bad aren’t always black-and-white categories, we never cease to be surprised when someone or something we’ve perceived as “good” does or becomes something we perceive as “bad,” from an esteemed politician’s transgression to a beloved celebrity’s slip into addiction or scientology or otherwise socially undesirable behavior. In Out of Character: Surprising Truths About the Liar, Cheat, Sinner (and Saint) Lurking in All of Us, researchers David DeSteno and Piercarlo Valdesolo explore this curious disconnect through the rigorous lens of science. Donating = Loving

Cognitive Dissonance Understanding this experiment sheds a brilliant light on the dark world of our inner motivations. The ground-breaking social psychological experiment of Festinger and Carlsmith (1959) provides a central insight into the stories we tell ourselves about why we think and behave the way we do. The experiment is filled with ingenious deception so the best way to understand it is to imagine you are taking part. So sit back, relax and travel back. The time is 1959 and you are an undergraduate student at Stanford University… As part of your course you agree to take part in an experiment on ‘measures of performance’.

Sankhyakarika The miracle of a perpetually dynamic Universe is enabled when two opposing factors in an interactive state occur simultaneously. Compression and expansion are two opposing activities but when it takes place simultaneously, activity time is conserved and the dynamic state continues. The theoretical clue, lacking in Physics and Cosmology is the numerical algorithm that defines the threshold of simultaneously interactive states, which is also the key to gravitation phenomena. This Simple Test Will Blow 98% Of People's Minds. You Other 2%… Well, You're Weird This is a simple test but what happens at the end will probably blow your mind. It happens to be one of those cool things that no one can really explain, but is totally fascinating. It isn't hard science, but you need to try it and see for yourself. Don't write anything down or use a calculator. This is just simple arithmetic...