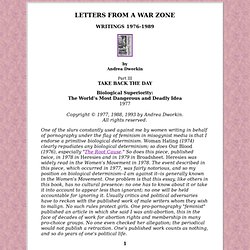 All rights reserved. One of the slurs constantly used against me by women writing in behalf of pornography under the flag of feminism in misogynist media is that I endorse a primitive biological determinism. Woman Hating (1974) clearly repudiates any biological determinism; so does Our Blood (1976), especially "The Root Cause. " So does this piece, published twice, in 1978 in Heresies and in 1979 in Broadsheet. All who are not of good race in this world are chaff. Hisses. The event was a panel on "Lesbianism as a Personal Politic" that took place in New York City, Lesbian Pride Week 1977. The audience applauded the passages on female superiority/male inferiority enthusiastically. In the audience, I saw women I like or love, women not strangers to me, women who are good not because of biology but because they care about being good, swept along in a sea of affirmation. So I spoke, afraid. A mouse's fear of men casts doubt on scientific research.

MICE become more timid and stressed when they smell a man, but are unaffected by the presence of a woman, researchers have discovered. 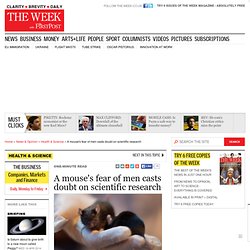 Scientists found that pheromones excreted by men make rats and mice believe they are under threat. The research "could have major implications" for laboratory tests that involve rodents, the Daily Telegraph says. Professor Jeffrey Mogil of McGill University in Montreal, who led the study, says that scientists have long suspected that rodents might be aware of their presence, and that this might affect the results of experiments, but "this has never been directly demonstrated until now". The report could endanger the findings of many previous studies where the presence of scientists in the study has not been adequately accounted for or controlled. "At the very least, published papers should state the gender of the experimenter who performed the behavioural testing," Mogil says. This last finding may offer a solution to the problem, researchers suggest.

One of these things is not like the others. Biological essentialism is not gender essentialism and it is not biological determinism. 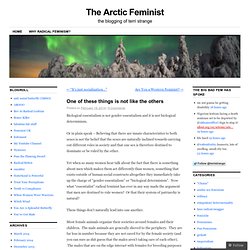 Or in plain speak – Believing that there are innate characteristics to both sexes is not the belief that the sexes are naturally inclined towards carrying out different roles in society and that one sex is therefore destined to dominate or be ruled by the other. Yet when so many women hear talk about the fact that there is something about men which makes them act differently than women, something that exists outside of human social constructs altogether they immediately take up the charge of “gender essentialism” or “biological determinism”. Now what “essentialist” radical feminist has ever in any way made the argument that men are destined to rule women? Or that their system of patriarchy is natural? These things don’t naturally lead into one another.

Most female animals organize their societies around females and their children. Dunbar's number. Menstruation: What is the evolutionary or biological purpose of having periods. Dudes Are Doomed (Part I): The Y Chromosome. Part one of seven part series. 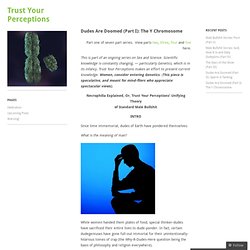 View parts two, three, four and five here. This is part of an ongoing series on Sex and Science. Scientific knowledge is constantly changing, — particularly Genetics, which is in its infancy. Trust Your Perceptions makes an effort to present current knowledge. Women, consider entering Genetics. Necrophilia Explained, Or, Trust Your Perceptions’ Unifying Theory of Standard Male Bullshit Since time immemorial, dudes of Earth have pondered themselves: What is the meaning of man? While women handed them plates of food, special thinker-dudes have sacrificed their entire lives to dude-ponder. What is the meaning of man?? The meaning of man is: To make a better woman. Not only are dudes falling down on the job, they are slowly degenerating into non-existence. In Parts I and II , Dudes Are Doomed, Trust Your Perceptions explains the genetics of sex, and looks at some examples of genetic war between the sexes occurring under our skin. 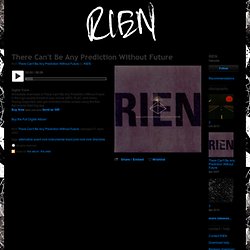