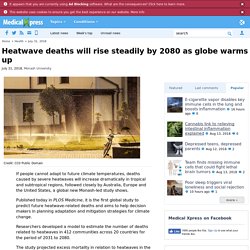 Published today in PLOS Medicine, it is the first global study to predict future heatwave-related deaths and aims to help decision makers in planning adaptation and mitigation strategies for climate change. Researchers developed a model to estimate the number of deaths related to heatwaves in 412 communities across 20 countries for the period of 2031 to 2080. The study projected excess mortality in relation to heatwaves in the future under different scenarios characterised by levels of greenhouse gas emissions, preparedness and adaption strategies and population density across these regions. "Future heatwaves in particular will be more frequent, more intense and will last much longer," Associate Professor Guo said.

Heat: the next big inequality issue. When July’s heatwave swept through the Canadian province of Quebec, killing more than 90 people in little over a week, the unrelenting sunshine threw the disparities between rich and poor into sharp relief. 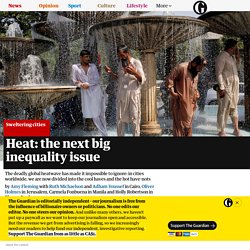 While the well-heeled residents of Montreal hunkered down in blissfully air conditioned offices and houses, the city’s homeless population – not usually welcome in public areas such as shopping malls and restaurants – struggled to escape the blanket of heat. Benedict Labre House, a day centre for homeless people, wasn’t able to secure a donated air-conditioning unit until five days into the heatwave. “You can imagine when you have 40 or 50 people in an enclosed space and it’s so hot, it’s very hard to deal with,” says Francine Nadler, clinical coordinator at the facility.

Fifty-four Montreal residents were killed by this summer’s heat. Human Health Threatened by 55°C "Super-Heatwaves" Heatwaves amplified by high humidity can reach above 40°C and may occur as often as every two years, leading to serious risks for human health. 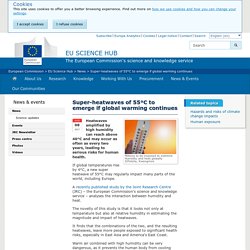 If global temperatures rise by 4°C, a new super heatwave of 55°C may regularly impact many parts of the world, including Europe. A recently published study by the Joint Research Centre (JRC) – the European Commission's science and knowledge service – analyses the interaction between humidity and heat. The novelty of this study is that it looks not only at temperature but also at relative humidity in estimating the magnitude and impact of heatwaves. It finds that the combinations of the two, and the resulting heatwaves, leave more people exposed to significant health risks, especially in East Asia and America's East Coast.

Warm air combined with high humidity can be very dangerous, as it prevents the human body from cooling down through sweating, leading to hyperthermia. However, if temperatures rise by 4°C, a severe scenario is on the horizon. Climate Change Threatens 50 years of Global Health Progress. Climate change threatens to undermine half a century of progress in global health, according to a major new report. 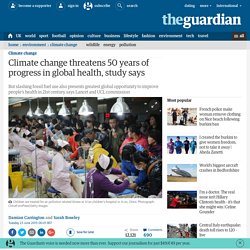 But the analysis also concludes that the benefits to health resulting from slashing fossil fuel use are so large that tackling global warming also presents the greatest global opportunity to improve people’s health in the 21st century. The report was produced by the Lancet/UCL commission on health and climate change, a collaboration of dozens of experts from around the world, and is backed by Margaret Chan, head of the UN World Health Organisation. “We see climate change as a major health issue and that it is often neglected in the policy debates,” said Professor Anthony Costello, director of the UCL Institute of Global Health and co-chair of the commission.

Experts Warn DIY 'Gene Editing' Kits Pose Risk to Society. The simplicity and low cost of tools to edit the genetic code means “garage scientists” - or amateurs with some skill - can now perform their own experiments, posing a potential risk from the release of GM bugs, a new report suggests. 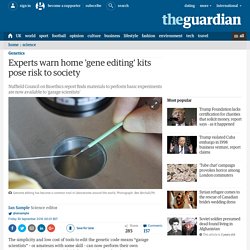 In a report published on Friday, the Nuffield Council on Bioethics said that the rise in precision “gene editing” tools had revolutionised biomedical research over the past ten years and could potentially have a dramatic impact on human society. But it found that the materials needed to perform basic experiments were available to enthusiasts outside academia and established labs. This year, one firm began to sell a kit for £100 to DIY biology interest groups that allowed them to render the common soil microbe, E coli, resistant to the antibiotic streptomycin. The report goes on to say that genetic technology has become so powerful that nations need to decide whether or not doctors should ever be allowed to modify the human species, a claims. Zika Could Have Alzheimer's-Like Effect In Adults. Zika can “wreak havoc” on the brains of adults and cause major, lasting damage, according to a new study. 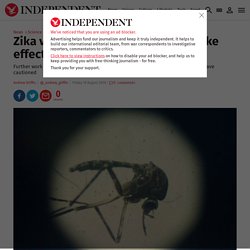 The research could overthrow the assumption that the virus is only of major worry to pregnant women. Until now, the mosquito-borne infection has been primarily linked to microcephaly, a serious defect where babies are born with small heads and brain damage. That has mean that pregnant women were warned to avoid coming into contact with the infection – but others have shown no obvious symptoms.