enjoys camping, hiking and spending a good amount of time outdoors. I want my kids to learn to love nature as much as i do.

Hiking race between state parks coming in June. The Ozark Trail Association has an upcoming event many Parkland hiking enthusiasts may want to join. 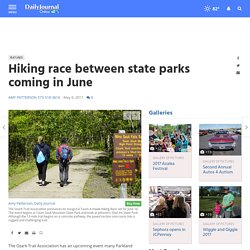 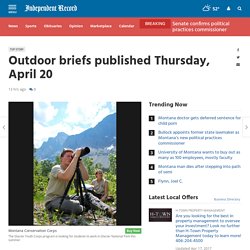 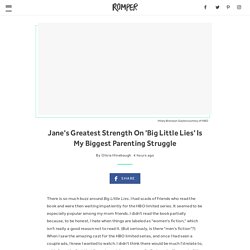 I had scads of friends who read the book and were then waiting impatiently for the HBO limited series. It seemed to be especially popular among my mom friends. I didn't read the book partially because, to be honest, I hate when things are labeled as "women's fiction," which isn't really a good reason not to read it. (But seriously, is there "men's fiction"?) Camping is Up in the U.S., Trend Expected to Continue as Millennials Seek the Positive Health Impacts of Time Spent Outdoors. BILLINGS, Mont. 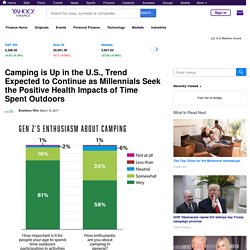 --(BUSINESS WIRE)-- An estimated 13 million U.S. households plan to camp more in 2017 than they did in 2016, and more than 1 million new households have started camping each year since 2014. Millennials are driving this growth as they take to the outdoors in greater numbers, and they have no intention of letting up. This is according to the results of the 2017 North American Camping Report, an annual independent study supported by Kampgrounds of America, Inc. (KOA). This Smart News Release features multimedia. Millennials now account for 38 percent of the 75 million active camper households in the U.S., up from 34 percent in 2016, and 51 percent say they plan to increase their camping this year.

Their attitudes about camping are reinforced by their behaviors and, with the influx of younger campers, this is changing the camping landscape overall. Key findings and trends based on the results of the 2017 North American Camping Report include: America’s Public Parks. Best Gadgets for Camping Trips: Charger, Device Case, GPS. Parenting Perspectives: The perfect parent (and it isn't me) It is pretty special to work from home and still be able to periodically participate in the hustle and bustle of business life. 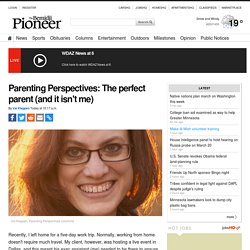 This trip in particular, however, had a few hurdles to overcome before I even had a chance to depart from Hector International Airport. For starters, my phone turned itself off and could not be revived. Do not pass Go, do not collect 200 text messages, your calls are locked in voicemail jail — no phone whatsoever. Broken. Gone. Perfect. Hubs relented and sent his phone with me so I could at least have communication once I landed. This is where the story gets pretty meaty. Before anyone goes and feels sorry for the guy, I will tell you this: my husband is far better as a single father than I am as a single mother. Okatibbee among resources luring outdoor enthusiasts to Lauderdale County.

Eric Plowman has been fishing for more than 40 years, and the Collinsville resident’s favorite spot is, of course, Lake Okatibbee. 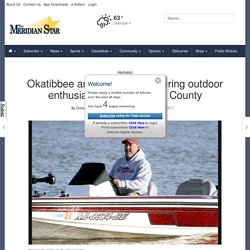 While it’s not uncommon to see plenty of boats parked out on the lake during warm months, that wasn’t always the case, Plowman said. It wasn’t until the last decade that Okatibbee became a spot for people to stop and fish rather than drive by as they headed elsewhere. The growth has economic implications. On one hand, the economic impact of hunting, fishing and outdoors recreation is difficult to quantify. The Mississippi Department of Wildlife, Fisheries and Parks says hunting brings $1.4 billion to Mississippi every year, according to research done by Mississippi State University, along with an $829 million economic impact for wildlife watching and a $772 million economic impact for fishing.

8 Childhood Moments That Directly Contributed To My Parenting Style. So much of the way we parent our kids is a direct result of the way we were raised (whether we consciously realize every impact or not). 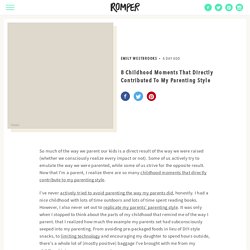 Some of us actively try to emulate the way we were parented, while some of us strive for the opposite result. 6 ways to get your children to love the great outdoors. Scientists highlight the critical role of birds in forest regeneration. Understanding the implications of the loss of bird species for ecosystem function is crucial to our understanding of the future trajectories of Amazonian landscapes Study results, published in the Journal Philosophical Transactions of the Royal Society B: Biological Sciences show that the understanding of animals and their physical traits is vital to saving tropical ecosystems. 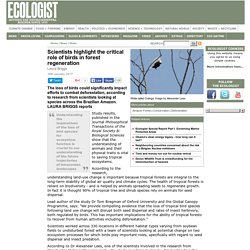 According to the research, understanding land-use change is important because tropical forests are integral to the long-term stability of global air quality and climate cycles. The health of tropical forests is reliant on biodiversity - and is helped by animals spreading seeds to regenerate growth. In fact it is thought 90% of tropical tree and shrub species rely on animals for seed dispersal. The team recorded that a loss of birds cuts the chance of forests bouncing back from deforestation. 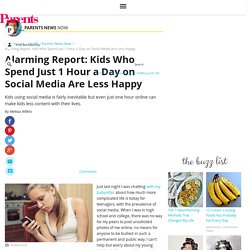 Artist Saves His Land from Pipelines by Turning It Into Art and Buying It a Copyright. Dec 16, 2016 10:21 AM EST An artist in Canada made the most interesting move in trying to save his family's property from being bought by oil companies. 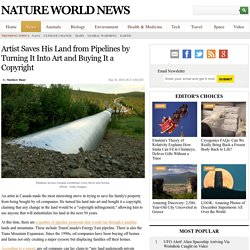