Effects of the menopause transition and hormone use on cognitive performance in midlife women. About Us - Menopausal Portal. Welcome to MenopauseNow! 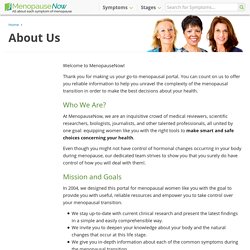 Thank you for making us your go-to menopausal portal. You can count on us to offer you reliable information to help you unravel the complexity of the menopausal transition in order to make the best decisions about your health. Who We Are? At MenopauseNow, we are an inquisitive crowd of medical reviewers, scientific researchers, biologists, journalists, and other talented professionals, all united by one goal: equipping women like you with the right tools to make smart and safe choices concerning your health.

Even though you might not have control of hormonal changes occurring in your body during menopause, our dedicated team strives to show you that you surely do have control of how you will deal with them!. Mission and Goals In 2004, we designed this portal for menopausal women like you with the goal to provide you with useful, reliable resources and empower you to take control over your menopausal transition. Psychopharmacology Bulletin - Google Books. The Impact of Education, Cultural Background, and Lifestyle on Symptoms of the Menopausal Transition: The Women's Health at Midlife Study. Self-awareness during the menopause. 1. 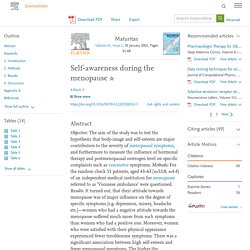 Introduction Today the menopause is regarded as and treated like a disease. Most people think that this time is coupled with almost unbearable difficulties. This negative perspective of the menopause leads to enormous anxiety among women [1], [2]. Metacognition in Later Adulthood: Spared Monitoring Can Benefit Older Adults' Self-Regulation - Christopher Hertzog, John Dunlosky, 2011. A conceptual analysis of five measures of metacognitive monitoring.

Does negative information about aging influence older adults’ physical performance and subjective age? The effect of cognitive testing and feedback on older adults’ subjective age: Aging, Neuropsychology, and Cognition: Vol 25, No 3. Subjective age, or how old a person feels, is an important measure of self-perception that is associated with consequential cognitive and health outcomes. 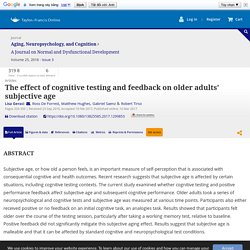 Behavioural Science Section / Viewpoint Gerontology 2016;62:86-93 Log in to MyKarger to check if you already have access to this title. 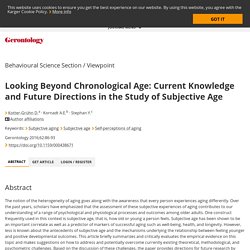 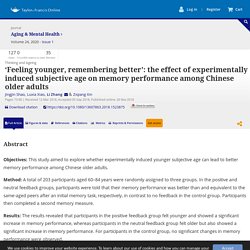 Being slower, feeling older? Experimentally induced cognitive aging experiences have limited impact on subjective age. Effects of isoflavones and amino acid therapies for hot flashes and co-occurring symptoms during the menopausal transition and early postmenopause: A systematic review. Physical activity and menopause-related quality of life – A population-based cross-sectional study. Altered Brain Connectivity in Early Postmenopausal Women with Subjective Cognitive Impairment. Introduction The perception of a change in cognitive or memory abilities is common in aging. 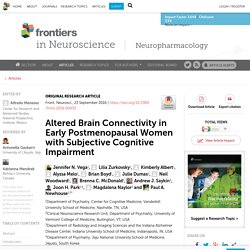 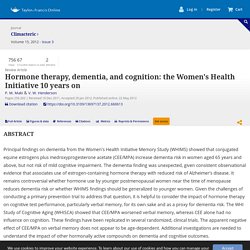 The dementia finding was unexpected, given consistent observational evidence that associates use of estrogen-containing hormone therapy with reduced risk of Alzheimer's disease. It remains controversial whether hormone use by younger postmenopausal women near the time of menopause reduces dementia risk or whether WHIMS findings should be generalized to younger women.

Given the challenges of conducting a primary prevention trial to address that question, it is helpful to consider the impact of hormone therapy on cognitive test performance, particularly verbal memory, for its own sake and as a proxy for dementia risk. Perimenopause. Overview Perimenopause means "around menopause" and refers to the time during which your body makes the natural transition to menopause, marking the end of the reproductive years. 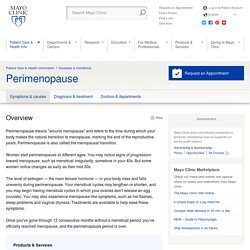 Perimenopause is also called the menopausal transition. Women start perimenopause at different ages. You may notice signs of progression toward menopause, such as menstrual irregularity, sometime in your 40s. But some women notice changes as early as their mid-30s. The level of estrogen — the main female hormone — in your body rises and falls unevenly during perimenopause. Once you've gone through 12 consecutive months without a menstrual period, you've officially reached menopause, and the perimenopause period is over. Symptoms. Executive functions in recently postmenopausal women: Absence of strong association with serum gonadal steroids. 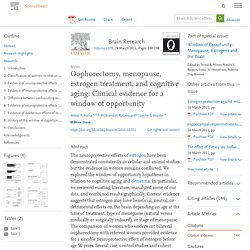 Introduction2. Alzheimer'S Disease, Dementia, Mild Cognitive Impairment and the Menopause: A ‘Window of Opportunity’? - Dennis A Davey, 2013. “Do not go gentle into that good night, Old age should burn and rave at close of day; Rage, rage against the dying of the light.” – Dylan Thomas Alzheimer's disease (AD) is one of the most common and most feared consequences of advancing age, with impairment of cognitive abilities, progressive decline in occupational and social functioning, and deterioration in personality. 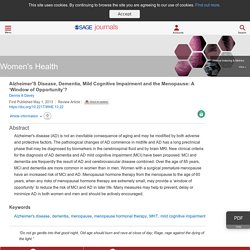 The disease may progress to complete loss of memory, inability to function mentally, physically and socially, and loss of any awareness and involvement in the surroundings. In the last 20 years, great progress has been made in the understanding of AD and its milder form ‘mild cognitive impairment’ (MCI). Progress has also been made in the understanding of vascular dementia (VaD) and its milder form ‘vascular cognitive impairment’ (VaCI). Perimenopause and Cognition. Age at menopause and duration of reproductive period in association with dementia and cognitive function: A systematic review and meta-analysis.

Prevention of Alzheimer's disease, cerebrovascular disease and dementia in women: the case for menopause hormone therapy. Menopause, cognition and dementia – A review - S Pertesi, G Coughlan, V Puthusseryppady, E Morris, M Hornberger, 2019. Sex differences in risk factors for vascular contributions to cognitive impairment & dementia. Vascular contributions to cognitive impairment and dementia (VCID) is the second most common cause of dementia. While males overall appear to be at a slightly higher risk for VCID throughout most of the lifespan (up to age 85), some risk factors for VCID more adversely affect women. These include female-specific risk factors associated with pregnancy related disorders (e.g. preeclampsia), menopause, and poorly timed hormone replacement.

Address correspondence to: Anne E. Dissecting the proteomics of estrogen replacement therapy. In the current issue of Genome Medicine, researchers report the results of the most in-depth quantitative proteomic study in connection with a clinical trial to be conducted to date. In the article ‘Application of serum proteomics to the Women’s Health Initiative conjugated equine estrogens trial reveals a multitude of effects relevant to clinical findings’, Samir Hanash and colleagues report a state-of-art proteomic analysis on data from the Women’s Health Initiative (WHI) trial. The authors find that intake of estrogen as part of hormone replacement therapy affects at least 10% of the women’s serum proteome.

Samir Hanash, based at the Fred Hutchinson Cancer Research Center, states that, “Remarkably, as many as 10 percent of plasma proteins analyzed were found to be affected by estrogen hormone replacement therapy in post-menopausal women. This work demonstrates the utility of comprehensive profiling of the serum proteome for clinical investigations. Menopause-associated risk of depression. There is little doubt that the menopausal transition can be very difficult for some women, and the topic remains of wide interest. It is an area of ongoing research to better understand the biological changes and downstream effects that can occur. Changes to mental health are often observed, with depression being one of the commonest symptoms experienced during menopause.

However, it remains unclear what the underlying causes of this depression are. In a new commentary in BMC Medicine this week, Claudio Soares discusses the evidence that some women are at an increased risk for depression during menopause as they transition through a “window of vulnerability”. View the latest posts on the On Medicine homepage. Is it the menopause or is it stress? - On Health. © ikostudio / stock.adobe.com. THE MILLION WOMEN STUDY. Home → Introduction Welcome to The Million Women Study What is The Million Women Study?

The Million Women Study started recruiting participants more than 20 years ago, in 1996. The initial stimulus was to obtain robust prospective information on the risk of breast cancer associated with use of different types of menopausal hormone therapy. When planning the necessary large-scale prospective study, an equally important aim was to obtain reliable information on the effects of other potentially modifiable factors that affect women’s health as they age. Contraception and midlife women: dispelling the myths - On Health. Remnants of the myth still exist that midlife women (variously defined as women between 35-65 years of age, or women born between 1952 and 1982) don’t need contraceptive counseling due to their decreased fertility (unlike adolescents and women up through their thirties). Also, there is often a belief among midlife women that they do not need safe birth control methods due to their decreased fertility and their increased health risks!

Both of these statements are not entirely true. Birth control in the midlife woman is essential, and before choosing a particular method, each midlife woman should be screened for risk factors in the same manner as any other woman. But the real issue boils down to this: when are we going to shake off the false premise that most midlife women don’t need comprehensive counseling as part of their annual wellness exam? Further, when are we going to get rid of the historical cobwebs of the 1960s that birth control pills aren’t safe for most midlife women? Contraception for midlife women: Lack of information? Interest? Investment? Or all of the above? - On Health. The Survey of Health, Ageing and Retirement in Europe (SHARE): Women in gender-equal countries perform better in cognitive tests.

Cognitive abilities of women after midlife may be affected by the gender-role attitudes in their countries of residence (August 2017) Some studies have found that women outperform men in cognitive tests after midlife. A menopause-specific quality of life questionnaire: development and psychometric properties. Longitudinal Analysis of the Association Between Vasomotor Symptoms and Race/Ethnicity Across the Menopausal Transition: Study of Women’s Health Across the Nation. The impact of attitudes towards the menopause on women's symptom experience: A systematic review. Subjective cognitive complaints at menopause associated with declines in performance of verbal memory and attentional processes: Climacteric: Vol 13, No 1. Background Subjective cognitive complaints are commonly reported during the menopause transition.