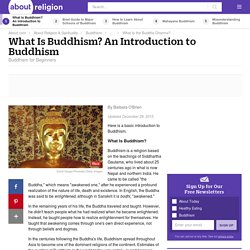 Buddhism. Buddhism began in India 2,500 years ago and remains the dominant world religion in the East. 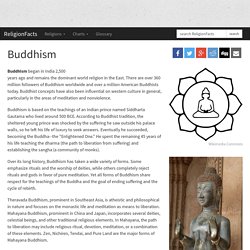 There are over 360 million followers of Buddhism worldwide and over a million American Buddhists today. Buddhist concepts have also been influential on western culture in general, particularly in the areas of meditation and nonviolence. Buddhism is based on the teachings of an Indian prince named Siddharta Gautama who lived around 500 BCE. According to Buddhist tradition, the sheltered young prince was shocked by the suffering he saw outside his palace walls, so he left his life of luxury to seek answers. About Buddhism. What is Buddhism. The founder of Buddhism was Buddha Shakyamuni who lived and taught in India some two and a half thousand years ago. 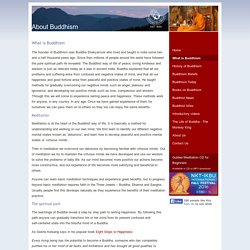 Since then millions of people around the world have followed the pure spiritual path he revealed. The Buddhist way of life of peace, loving kindness and wisdom is just as relevant today as it was in ancient India. Buddha explained that all our problems and suffering arise from confused and negative states of mind, and that all our happiness and good fortune arise from peaceful and positive states of mind. He taught methods for gradually overcoming our negative minds such as anger, jealousy and ignorance, and developing our positive minds such as love, compassion and wisdom. Through this we will come to experience lasting peace and happiness. Meditation. The religion of Buddhism. Religions of the world Menu Quotation by Siddhãrtha Gautama (Buddha): "Do not believe in anything simply because you have heard it. 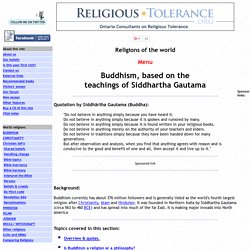 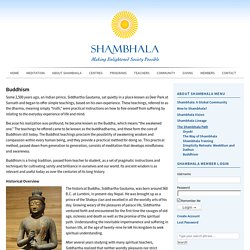 These teachings, referred to as the dharma, meaning simply “truth,” were practical instructions on how to free oneself from suffering by relating to the everyday experience of life and mind. Because his realization was profound, he became known as the Buddha, which means “the awakened one.” The teachings he offered came to be known as the buddhadharma, and these form the core of Buddhism still today. The Buddhist teachings proclaim the possibility of awakening wisdom and compassion within every human being, and they provide a practical method for doing so. Buddhism - Beliefnet. BuddhaNet - Worldwide Buddhist Information and Education Network. 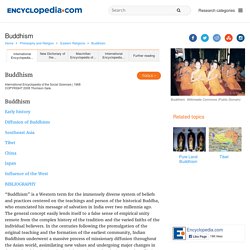 History of Buddhism. The founder of Buddhism in this world is Buddha Shakyamuni. 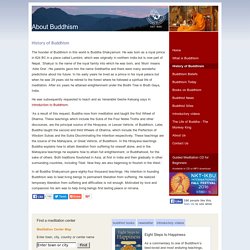 He was born as a royal prince in 624 BC in a place called Lumbini, which was originally in northern India but is now part of Nepal. ‘Shakya’ is the name of the royal family into which he was born, and ‘Muni’ means ‘Able One’. His parents gave him the name Siddhartha and there were many wonderful predictions about his future. In his early years he lived as a prince in his royal palace but when he was 29 years old he retired to the forest where he followed a spiritual life of meditation. Buddhism - definition of Buddhism by The Free Dictionary. The religion of the followers of Gautama Buddha, whose 6th-century B.C. doctrines strongly opposed the formalized, mechanical rituals of the Brahman sect in Hinduism; Buddha’s teachings offered escape from endless reincarnation, a method of spiritual attainment through correct views and actions (The Eight-Fold Path), and a spiritual goal (Nirvana): a soul free from craving, suffering, and sorrow. 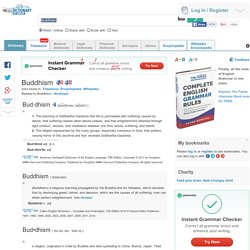 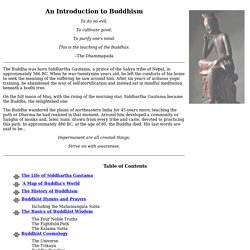 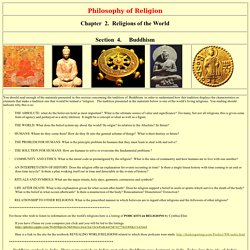 IntroductionBuddhism, a major world religion, founded in northeastern India and based on the teachings of Siddhartha Gautama, who is known as the Buddha, or Enlightened One. See Buddha.Originating as a monastic movement within the dominant Brahman tradition of the day, Buddhism quickly developed in a distinctive direction. The Buddha not only rejected significant aspects of Hindu philosophy, but also challenged the authority of the priesthood, denied the validity of the Vedic scriptures, and rejected the sacrificial cult based on them. Moreover, he opened his movement to members of all castes, denying that a person's spiritual worth is a matter of birth. Sacred Texts: Buddhism. Sacred-texts home Journal Articles: Buddhism OCRT: Buddhism Buy CD-ROM Buy Books about Buddhism Modern works Southern Buddhism Northern Buddhism JatakaLinks Modern works The Gospel of Buddha: Compiled from Ancient Records by Paul Carus [1909]A modern retelling of the Buddha's work and life.

When the body disintegrates at death, the mind does not cease. Although our superficial conscious mind ceases, it does so by dissolving into a deeper level of consciousness, call ‘the very subtle mind’. Buddhist Beliefs - Kadampa Buddhism. All living beings have the same basic wish to be happy and avoid suffering, but very few people understand the real causes of happiness and suffering.

We generally believe that external conditions such as food, friends, cars, and money are the real causes of happiness, and as a result we devote nearly all our time and energy to acquiring these. Superficially it seems that these things can make us happy, but if we look more deeply we shall see that they also bring us a lot of suffering and problems. Happiness and suffering are opposites, so if something is a real cause of happiness it cannot give rise to suffering.

Buddhism. Buddhism is one of the most important Asian spiritual traditions. During its roughly 2.5 millennia of history, Buddhism has shown a flexible approach, adapting itself to different conditions and local ideas while maintaining its core teachings. Buddhism Origins, Buddhism History, Buddhism Beliefs. Most historians agree that Buddhism originated in northern India in the 5th century B.C.E. The tradition traces its origin to Siddhartha Gautama (or Gotama), who is typically referred to as the Buddha (literally the "Awakened" or "Enlightened One"). Siddhartha observed the suffering in the world and set out to find an antidote. What do Buddhists believe - Beliefs of Buddhism. By Barbara O'Brien Updated April 30, 2015. Shortly after I began to study Buddhism, someone asked me "What do Buddhists believe? " I was taken aback by the question. Buddhist beliefs. Religious beliefs are important in Buddhism, but its central doctrines aren't necessarily the same as those of other world religions.

Overview of Korean Buddhism – Zen Buddhism. In a Korean Buddhist monastery, the day begins at 3 o’clock in the morning. One monk wakes up earlier than the others and puts on his ceremonial robes. The monk then silently starts to beat a Moktak, a wooden and bell-shaped percussion instrument, and chant Buddhist sutras. He walks to each part of the monastery and chants as he proceeds. With the purified divine eye, surpassing that of men, a Buddha sees beings as they pass hence or come to be. Holographic #Bamiyan Buddha HT @M_T_Miller cf. @BjoernGebert @schelbertgeorg. I'm glad I'm dead I'm worthless like this fucking Buddha head.

If a smiling Buddha salad is on the menu, how can you consider anything else? All wrong-doing arises because of mind. If mind is transformed can wrong-doing remain? - Buddha. The Stone Buddha gets the #STLCards out of a bases-loaded, no out jam! Buddha_fix's photo. Snowflake Obsidian Bracelet Set at Xen Jewelry #etsy #yoga #buddha #jewelry. I'm lowkey a Buddha. What we think, we become. - Buddha #brainyquote #QOTD #inspirational #flowers. Buddhism. World religion founded by the Buddha Buddhism (, ) is the world's fourth-largest religion[3] with over 520 million followers, or over 7% of the global population, known as Buddhists. [web 1][5] Buddhism encompasses a variety of traditions, beliefs and spiritual practices largely based on original teachings attributed to the Buddha and resulting interpreted philosophies. It originated in ancient India as a Sramana tradition sometime between the 6th and 4th centuries BCE, spreading through much of Asia.

Two major extant branches of Buddhism are generally recognized by scholars: Theravada (Pali: "The School of the Elders") and Mahayana (Sanskrit: "The Great Vehicle"). Buddhism Basic Beliefs and Teachings. 5 Minute Introduction. Buddhism. Basics of Buddhism. The Four Noble Truths The Four Noble Truths comprise the essence of Buddha's teachings, though they leave much left unexplained.

The Benefits of Buddhism! (Reasons to Live a Buddhist Life) Japanese Buddhism ZEN shu Hanging Scroll Set 3pc Gold Navy Red NEW 541f03. @megrar I just don't really bother w religion n stuff, but buddhism is pretty nice, it's more of a concept to live by than a religion. Dōgen Zenji — "A fool sees himself as another, but a wise man ..." Red - Colour Symbolism in Buddhism. Thai Women in Buddhism by Chatsumarn Kabilsingh (1991, Paperback)