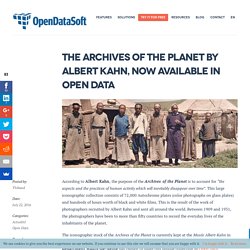 This large iconographic collection consists of 72,000 Autochrome plates (color photographs on glass plates) and hundreds of hours worth of black and white films. This is the result of the work of photographers recruited by Albert Kahn and sent all around the world. BossaIntro – BOINC. Bossa is an open-source software framework for distributed thinking - the use of volunteers on the Internet to perform tasks that use human cognition, knowledge, or intelligence. 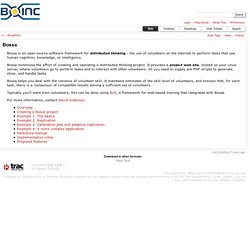 Bossa minimizes the effort of creating and operating a distributed thinking project. It provides a project web site, hosted on your Linux server, where volunteers go to perform tasks and to interact with other volunteers. All you need to supply are PHP scripts to generate, show, and handle tasks. Test4Theory. This site uses JavaScript, HTML5 and CSS3 to show the results and your BOINC credit. 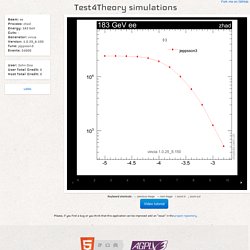 If you cannot enable JavaScript in your browser's settings or your browser does not support HTML5 video and/or CSS3, you will be missing a friendly user interface to the results: an interactive gallery with all the figures from the simulations of your computer: zoom in and out with a friendly interface, browse the figures (next,previous and index) using shortcuts and without going back and forward to see other image, swipe movement for flicking through images on touch devices, etc.

And some BOINC statistics. Here you have an screenshot of the web page with a free, modern and open source web browser like Mozilla Firefox or Google Chrome: Citizen CyberLab. Inside the WI DNR: poor morale, fear, despair over lost mission. What water, wetland protection is all about "A little fill here and there may seem to be nothing to become excited about. 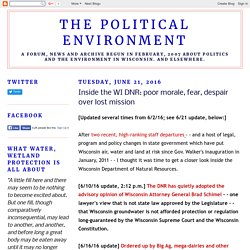 But one fill, though comparatively inconsequential, may lead to another, and another, and before long a great body may be eaten away until it may no longer exist. Our navigable waters are a precious natural heritage, once gone, they disappear forever," wrote the Wisconsin Supreme Court in its 1960 opinion resolving Hixon v. Global Warming - Governor's Task Force - WDNR. In April, 2007 Governor Doyle signed Executive Order 191 which brought together a prominent and diverse group of key Wisconsin business, industry, government, energy and environmental leaders to create a Task Force on Global Warming. 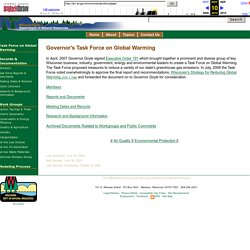 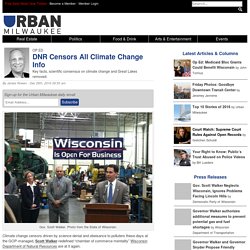 Scott Walker. Photo from the State of Wisconsin. Climate change censors driven by science denial and obeisance to polluters these days at the GOP-managed, Scott Walker-redefined “chamber of commerce mentality” Wisconsin Department of Natural Resources are at it again. Not content with having already stripped content and links from an agency webpage about climate change – – deletions I documented some years ago and which I have frequently referenced – – the ideologues intent on scrubbing science off these pages and sowing doubt and confusion about the consensus view of experts worldwide about climate change have edited, deleted and otherwise compressed information in order to whitewash long-standing concepts and facts off a climate change page about the Great Lakes – – the same way, I will add, that Walker edited and watered-down the Wisconsin Idea, which has for decades had been the University system’s historic mission statement.

Ngram Viewer. The bizarre in-app economics of mobile games are warping kids and befuddling parents — Quartz. It is nighttime and my young son is asleep; I am awake and trying to help him. 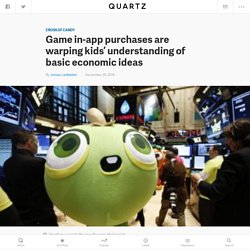 If he were a little older I might be gluing something onto a science project or baking cupcakes for a school event. Instead, I am drawing my finger over lines of imaginary fruit on an iPad, trying to rack up points so he can better enjoy a game called Fruit Pop, a matching game similar to the wildly popular Candy Crush. Specifically, I am trying to increase the stack of coins in his account so that he can buy boosts that alter the game in some way (such as giving the player more than the normally allotted sixty seconds per turn). After a while, it becomes evident that the easiest way to obtain coins is simply to buy them with real cash—such as 50,000 coins for $1.99 (the most common in-app purchase in Fruit Pop). 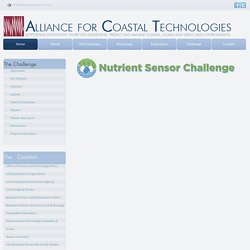 Image 2016-12-28 at 5.13.08 AM.png. Climate Science. The field of earth and environmental sciences is rapidly adopting the paradigm of large-scale, data-intensive analytics to understand our complex and ever-changing planet. 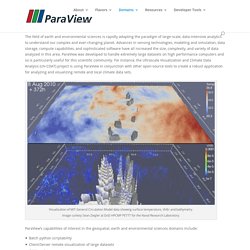 Advances in sensing technologies, modeling and simulation, data storage, compute capabilities, and sophisticated software have all increased the size, complexity, and variety of data analyzed in this area. ParaView was developed to handle extremely large datasets on high performance computers and so is particularly useful for this scientific community. PPEH Lab. About – ENVIRONMENTAL DATA & GOVERNANCE INITIATIVE.