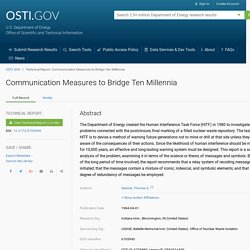 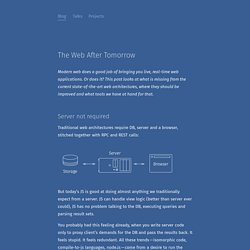 Or does it? This post looks at what is missing from the current state-of-the-art web architectures, where they should be improved and what tools we have at hand for that. Server not required. #Additivism — The 3D Additivist Cookbook. The 3D Additivist Cookbook, devised and edited by Morehshin Allahyari & Daniel Rourke, is a free compendium of imaginative, provocative works from over 100 world-leading artists, activists and theorists. 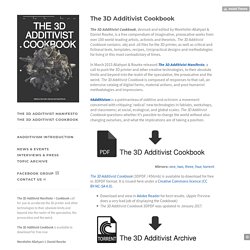 The 3D Additivist Cookbook contains .obj and .stl files for the 3D printer, as well as critical and fictional texts, templates, recipes, (im)practical designs and methodologies for living in this most contradictory of times. In March 2015 Allahyari & Rourke released The 3D Additivist Manifesto, a call to push the 3D printer and other creative technologies, to their absolute limits and beyond into the realm of the speculative, the provocative and the weird. The 3D Additivist Cookbook is composed of responses to that call, an extensive catalog of digital forms, material actions, and post-humanist methodologies and impressions. Jonnydubowsky/datsync: Datomic <-> DataScript syncing/replication utilities. 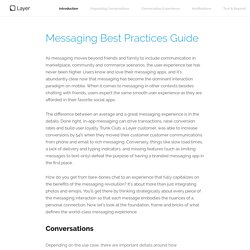 When the other party is present in the conversation, users on average wait a bit longer to see if the typing indicator is going to appear. This translates into longer sessions with more engagement, and often results in a tighter loop of communication. Present in Application Green, yellow, red dot. This type of presence indicator is also useful in scenarios where the user eventually transitions from asynchronous messaing to a synchronous voice or video call. Active or Last Seen The ‘last seen’ information shows when a user has most recently opened the application. Present in the Conversation This is a new concept of presence that has been popularized by Snapchat. Smart Cities. 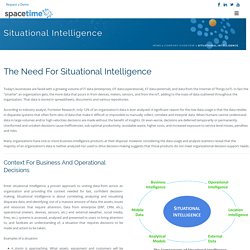 Situational intelligence is about correlating, analyzing and visualizing disparate data, and identifying, out of a massive amount of data, the assets, issues and resources that require attention. Data from enterprise (ERP, CRM, etc.), operational (meters, devices, sensors, etc.) and external (weather, social media, fires, etc.) systems is accessed, analyzed and presented to users to bring attention to, and facilitate an understanding of, a situation that requires decisions to be made and action to be taken. 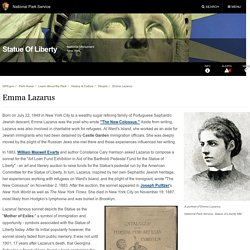 " Aside from writing, Lazarus was also involved in charitable work for refugees. At Ward's Island, she worked as an aide for Jewish immigrants who had been detained by Castle Garden immigration officials. She was deeply moved by the plight of the Russian Jews she met there and these experiences influenced her writing.