Female Beauty in Art: History, Feminism, Women Artists. This Is How Art Secretly Shapes Our Ideas About Female Beauty. Social Media Editor22 February 2018 There is no question that female standards of beauty have changed overtime and, in celebration of International Women’s Day, we thought it might be worth taking a trip down memory lane, using painting and sculpture as our guide. 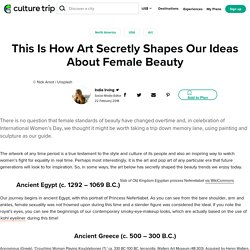 The artwork of any time period is a true testament to the style and culture of its people and also an inspiring way to watch women’s fight for equality in real time. Perhaps most interestingly, it is the art and pop art of any particular era that future generations will look to for inspiration. So, in some ways, the art below has secretly shaped the beauty trends we enjoy today. Ancient Egypt (c. 1292 – 1069 B.C.)

Our journey begins in ancient Egypt, with this portrait of Princess Nefertiabet. Ancient Greece (c. 500 – 300 B.C.) Anonymous (Greek). In Ancient Greece beauty in women was equivocated with cunning and evil, a belief that perhaps still lingers to this day. Han Dynasty (c. 206 B.C. – 220 A.D.) The 1920s The 1930s – 1950s. Icons of Beauty: Art, Culture, and the Image of Women [2 volumes] - Lindsay J. Bosch, Debra N. Mancoff. How the 'ideal' woman's body shape has changed throughout history - CNN. Yet no matter how aesthetically unique or historically significant a particular piece of fashion may be, most visitors to the museum typically ask one question, said Emma McClendon, the museum's associate curator of costume. 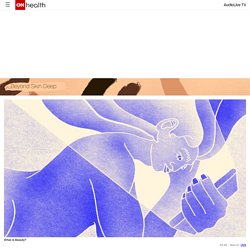 "Whether it's contemporary or 19th century, they want to know what size it is or what size it would correlate to, or what measurement it is," she said. "We as a culture, as a society, are obsessed with size. It's become connected to our identity as people. " This obsession fuels societal pressures to appear a certain way and to have a certain body type, particularly among young women, stemming from a cultural construct of the "ideal" body, which has in turn changed over time -- as long ago as pre-history. The idea of beauty is always shifting. Today, it’s more inclusive than ever. This story appears in the February 2020 issue of National Geographic magazine. 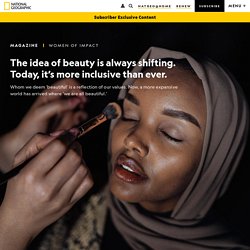 The Sudanese model Alek Wek appeared on the November 1997 cover of the U.S. edition of Elle magazine, in a photograph by French creative director Gilles Bensimon. It was, as is so often the case in the beauty business, a global production. Wek, with her velvety ebony skin and mere whisper of an Afro, was posed in front of a stark, white screen. Her simple, white Giorgio Armani blazer almost disappeared into the background. Wek, however, was intensely present. She was standing at an angle but looking directly into the camera with a pleasant smile spread across her face, which wasn’t so much defined by planes and angles as by sweet, broad, distinctly African curves.

FEATURE: Mind Over Body: Is There Pressure on Female Artists to Look a Certain Way and Have an ‘Ideal’ Body Size? — Music Musings & Such. Tweets circulated about the video and many questioned the video’s producers as to why they showed shots of Sydelko eating – gained cheap and nasty laughs based on her appearance and eating habits. 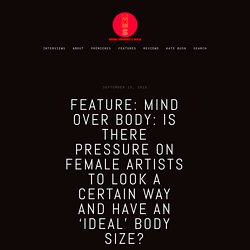 The article shed more light: “These tweets suggest that Sydelko was perhaps unaware of the producer's intentions to only portray her as the “fat girl,” which makes the matter much worse. While the comedian is quick to joke about herself on her YouTube channel, it’s a different matter to make “fat jokes” at the expense of Sydelko in the video, especially if she was uninformed about how she would be portrayed”.

Although women are being more accepted and there is, perhaps, less judgement compared to past years; modern Pop singers are still sharing their experiences of being fat-shamed and cast aside because they do not look a certain way. Feminine beauty ideal. In fairy tales[edit] The feminine beauty ideal is portrayed in many children's fairy tales.[1] It has been common in the Brothers Grimm fairy tales for physical attractiveness in female characters to be rewarded.[3] In those fairy tales, "beauty is often associated with being white, economically privileged, and virtuous. 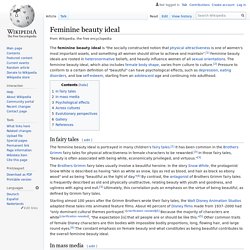 "[3] The Brothers Grimm fairy tales usually involve a beautiful heroine. In the story Snow White, the protagonist Snow White is described as having "skin as white as snow, lips as red as blood, and hair as black as ebony wood" and as being "beautiful as the light of day Starting almost 100 years after the Grimm Brothers wrote their fairy tales, the Walt Disney Animation Studios adapted these tales into animated feature films. In mass media[edit] Mass media is one of the most powerful tools for young girls and women to learn and also understand feminine beauty ideals.

Psychological effects[edit] Arts Under Pressure: Protecting Cultural Diversity in the Age of Globalisation - Joost Smiers. Plato on Art and Beauty - Alison Denham. Beauty and the End of Art: Wittgenstein, Plurality and Perception - Sonia Sedivy. This Surreal Photo Series Critiques Society’s Pressure On Women, And I.