You-have-rights. In NYC, You DO Have The Right. 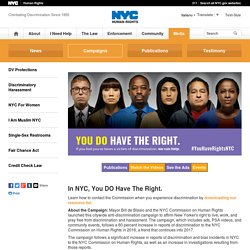 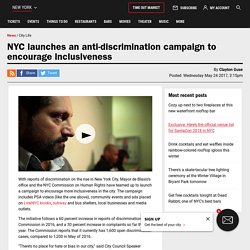 The campaign includes PSA videos (like the one above), community events and ads placed on LinkNYC kiosks, subway and bus shelters, local businesses and media outlets. The initiative follows a 60 percent increase in reports of discrimination to the Commission in 2016, and a 30 percent increase in complaints so far this year. The Commission reports that it currently has 1,600 open discrimination cases, compared to 1,200 in May of 2016. “There’s no place for hate or bias in our city,” said City Council Speaker Melissa Mark-Viverito in a statement. “At a time where bias incidents are rising at alarming rates across our nation, this campaign reminds us that all New Yorkers have a right to feel safe and secure. 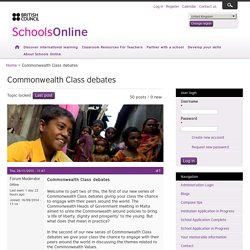 The Commonwealth Heads of Government meeting in Malta aimed to unite the Commonwealth around policies to bring ‘a life of liberty, dignity and prosperity’ to the young. But what does that mean in practice? USA-Cuba. Free, Scientific Personality Test of Briggs Myers' 16 Types - The TypeFinder® Research Edition. L'Histoire du Mouvement des Droits Civiques.

Poetry writing. Jamie Lawson - Wasn't Expecting That. FRANCE - Info ou intox : comment déjouer les pièges sur Internet ? Working in the future. Historypin. Who do you know who is amazing? Someone interesting, kind, worthwhile, brave, crazy, amazing, selfless, or generous and who is continuing living life to the full - an "Active Ager"? Simply create a Life Story about someone you know using photos and stories you’ve collected and tell the story of their life and what they are doing now. It’s a brilliant way to tell the world how great they are.

This Challenge has been launched as part of the European Year 2012 which is designed to celebrate active ageing and relationships between people of different generations. Active ageing means growing old in good health and as a full member of society, feeling more fulfilled in our jobs, more independent in our daily lives and more involved as citizens.