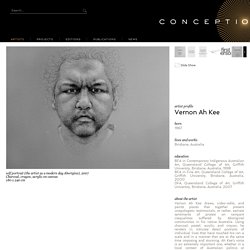 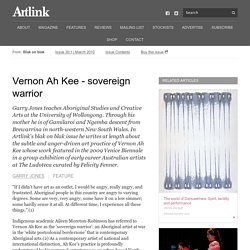 Through his mother he is of Gamilaroi and Ngemba descent from Brewarrina in north-western New South Wales. In Artlink's blak on blak issue he writes at length about the subtle and anger-driven art practice of Vernon Ah Kee whose work featured in the 2009 Venice Biennale in a group exhibition of early career Australian artists at The Ludoteca curated by Felicity Fenner. Garry Jones | Feature "If I didn't have art as an outlet, I would be angry, really angry, and frustrated. Aboriginal people in this country are angry to varying degrees. As a founding member of the Brisbane based proppaNOW urban Aboriginal artists collective, Ah Kee identifies vociferously as an ‘urban Aboriginal Artist’. Ah Kee has only been exhibiting for a decade now and in some circles is still regarded as an ‘emerging artist’. In 2004 Ah Kee returned to portraiture in the work Fantasies of the Good.

Footnotes 1. Vernon AH KEE. Theme: Life and PeopleRegion: RainforestYear level: SecondaryNot currently on display Neither pride nor courage 2006 is a triptych of drawings belonging to a series of large-scale hand-drawn portraits that Vernon Ah Kee has been developing since 2004. 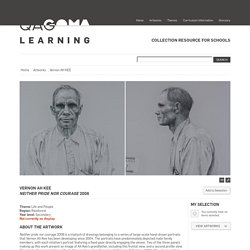 The portraits have predominately depicted male family members, with each relative’s portrait featuring a fixed gaze directly engaging the viewer. Two of the three panels making up this work present an image of Ah Kee’s grandfather, including this frontal view, and a second profile view. Endnote 1 See Australian Institute of Aboriginal and Torres Strait Islander Studies, viewed 17 September 2013. Vernon Ah Kee is a Brisbane-based artist at the forefront of conceptual art practice in Australia. Like many contemporary Indigenous artists, Vernon Ah Kee is particularly attuned to the politics of representation, and the social and economic implications of unequal cultural exchange in Australian society. National Indigenous Art Triennial '07:Culture Warriors. 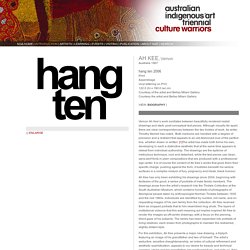 Although visually far apart, there are clear correspondences between the two bodies of work. As writer Timothy Morrell has noted, ‘Both mediums are handled with a degree of precision and a restraint that appeals to an old-fashioned love of the perfect line, whether drawn or written’.[1]The artist has made both forms his own, developing in each a distinctive aesthetic that at the same time appears to retreat from individual authorship.

The drawings are the epitome of meticulous technique, cool and detached, while the text pieces use clean, sans-serif fonts in plain compositions that are produced with a professional sign-writer. It is of course the content of Ah Kee’s works that gives them their specific charge: pushing against the form, it bubbles beneath his serene surfaces in a complex mixture of fury, poignancy and bleak, black humour. Russell Storer [2] Morrell. Nocookies. Facebook App: Open links in External Browser There is a specific issue with the Facebook in-app browser intermittently making requests to websites without cookies that had previously been set. This appears to be a defect in the browser which should be addressed soon. The simplest approach to avoid this problem is to continue to use the Facebook app but not use the in-app browser.

This can be done through the following steps: Open the settings menu by clicking the hamburger menu in the top rightChoose “App Settings” from the menuTurn on the option “Links Open Externally” (This will use the device’s default browser) Windows Enabling Cookies in Internet Explorer 9 Open the Internet BrowserClick Tools (or “gear” icon at top right hand corner) > Internet Options > Privacy > AdvancedCheck Override automatic cookie handlingFor First-party Cookies and Third-party Cookies click AcceptClick OK and OK. George Drahm (Uncle George)from fantasies of the good. In fantasies of the good, Vernon Ah Kee portrays his family members in 13 charcoal drawings that reference and critique the depiction of Aboriginal people in Australia. 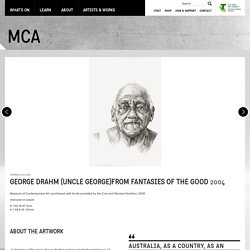 This 2004 series were the first serious portraits undertaken by Ah Kee, whose practice embraces text-based video works and installations. fantasies of the good originated in Ah Kee’s discovery of portraits of his great-grandfather (George Sibley) and grandfather (Mick Miller) in the public collection of the State Library of Queensland. Both photographs were taken on Palm Island Mission in 1938 by Norman Tindale, an anthropologist who documented Aboriginal people all over Australia between 1921 and 1957. While a valuable record of the connection of Aboriginal peoples to specific lands, Tindale’s photographs also infer an underlying racism in their use of identity numbers rather than names, and their close-cropped mugshot-style format.