How Much is Bernie Sanders Worth?

Sandars as a Young Adault

Sanders on Social Justice Issues. The Impact of Bernie Sanders (Real or Hype?) Optimism about Sanders Presidential Chances. The Economics of Bernie Sanders. Breaking Up the Banks (Bernie Sanders) Sander's democratic socialism. Sanders on Trade. 2016 Election (Bernie Sanders) The Young Turks Interview (FULL) Why Does the Radical Left Feel Threatened by the Bernie Sanders Campaign? By William Kaufman / counterpunch.org In this presidential summer of our discontent, the radical left has been fighting hard—not chiefly against capitalism and its galloping calamities, it seems, but against . . . 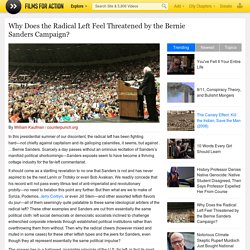 Bernie Sanders. Scarcely a day passes without an ominous recitation of Sanders’s manifold political shortcomings—Sanders exposés seem to have become a thriving cottage industry for the far-left commentariat. It should come as a startling revelation to no one that Sanders is not and has never aspired to be the next Lenin or Trotsky or even Bob Avakian. We readily concede that his record will not pass every litmus test of anti-imperialist and revolutionary probity—no need to belabor this point any further. The answer lies in a hallowed, inviolable principle of the U.S. far left, in fact its most revered first commandment: thou shalt not support, endorse, or even smile at a Democrat. Yes, we urgently need an independent activist left party, one that can have a real impact. . [1] R. 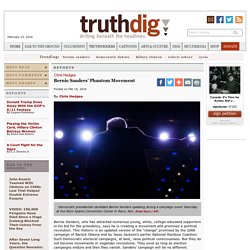 (Evan Vucci / AP) Bernie Sanders, who has attracted numerous young, white, college-educated supporters in his bid for the presidency, says he is creating a movement and promises a political revolution. This rhetoric is an updated version of the “change” promised by the 2008 campaign of Barack Obama and by Jesse Jackson’s earlier National Rainbow Coalition. Sanders (s243a@Delicious) #berniesanders hashtag on Twitter. Bernie Sanders' Morality is a Threat to the Status Quo  It seems the mainstream media is finally starting to pay a little bit of attention to Bernie Sanders. 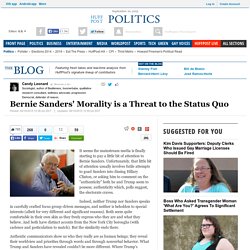 Unfortunately, that little bit of attention usually involves futile attempts to goad Sanders into dissing Hillary Clinton, or asking him to comment on the "authenticity" both he and Trump seem to possess; authenticity which, polls suggest, the electorate craves. Indeed, neither Trump nor Sanders speaks in carefully crafted focus group-driven messages, and neither is beholden to special interests (albeit for very different and significant reasons).

Both seem quite comfortable in their own skin as they freely express who they are and what they believe. And both have distinct accents from the New York City boroughs (with cadence and gesticulation to match). But the similarity ends there. Authentic communicators show us who they really are as human beings; they reveal their worldview and priorities through words and through nonverbal behavior. Bernie Sanders: 'Not Acceptable' To Jail Young Pot Smokers And Let Big Bank CEOs Walk. This Week with George Stephanopolous on ABC. The PATENT Act: The Senate’s Solid Start to Reforming the Patent System. Will this be the year we pass patent reform? 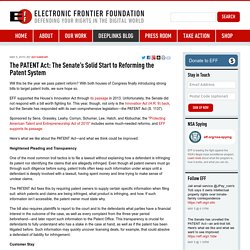 With both houses of Congress finally introducing strong bills to target patent trolls, we sure hope so. EFF supported the House’s Innovation Act through its passage in 2013. Unfortunately, the Senate did not respond with a bill worth fighting for. This year, though, not only is the Innovation Act (H.R. 9) back, but the Senate has responded with its own comprehensive legislation—the PATENT Act (S. 1137).

Sponsored by Sens. Here’s what we like about the PATENT Act—and what we think could be improved: Heightened Pleading and Transparency One of the most common troll tactics is to file a lawsuit without explaining how a defendant is infringing its patent nor identifying the claims that are allegedly infringed. The PATENT Act fixes this by requiring patent owners to supply certain specific information when filing suit: which patents and claims are being infringed, what product is infringing, and how.