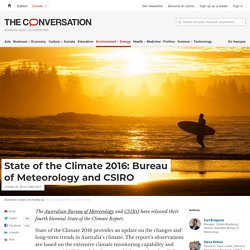 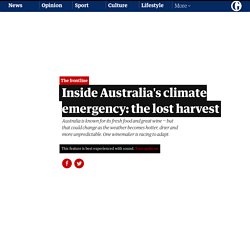 The increased temperature and changing weather patterns of the past 20 years have already reduced wheat production and changed where crops such as cotton can be grown. Produce has been damaged by extreme weather events. And late-season frosts, smoke from bushfires and the migration of pests and weeds pose additional threats. Projected output has dropped by as much as 25% in some parts of Australia’s cropping and grazing industries. That is only at 1C of global warming. Scientists predict that the planet will reach about 3C of warming by 2100 if countries meet current commitments.

The climate crisis will eventually affect all aspects of food security, including price, availability and nutrition, says Mark Howden, the director of the Australian National University’s climate change institute. Climate Change Deniers vs The Consensus. UPDATE 1 (12th Dec 09): There have been a few complaints about the legibility of the image. So I’ve created a version on white instead of black. UPDATE 2 (19th Dec 09): Thanks to amazing feedback, I’ve amended the language and wording and detail of the image.

Thanks particularly to Arthur Smith and Jooil Kim for clarifying info. Nice! I researched this subject in a very particular way. Why? My conclusion is “what a nightmare”. Most of the info for this image is sourced from Realclimate.org. Unfortunately, the majority of the writing on there is so scientific and so technical, it makes the website nigh on useless to the casual, curious reader. This image was a mammoth undertaking, especially for someone like me, unschooled in climate science. How to Reduce the World’s Carbon Footprint by 2050. To prevent climate change climate breakdown and keep global warming global heating below 3–4 degrees celsius, we have to reduce greenhouse gas emissions and transition to renewable energy – globally.

Here’s a graphical blueprint on how we might get to net zero carbon emissions by 2050. Created in association with New Internationalist Magazine. How Many Gigatons of CO2…? Methane (or ‘Natural Gas’) – the Other Major Greenhouse Gas. When Sea Levels Attack! Transport is letting Australia down in the race to cut emissions. At a time Australia is meant to be reducing its greenhouse emissions, the upward trend in transport sector emissions continues. 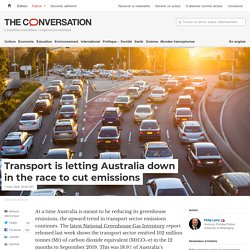 The latest National Greenhouse Gas Inventory report released last week shows the transport sector emitted 102 million tonnes (Mt) of carbon dioxide equivalent (MtCO₂-e) in the 12 months to September 2019. This was 18.9% of Australia’s emissions. Overall, the trend in emissions from all sectors have been essentially flat since 2013. If Australia is to reduce emissions, all sectors including transport must pull their weight. À lire aussi : Four ways our cities can cut transport emissions in a hurry: avoid, shift, share and improve Transport emissions have gone up 64% since 1990.

Transport sector emissions include the direct burning of fuels for road, rail, domestic aviation and domestic shipping, but exclude electricity for electric trains. Inevitable results of policy failure À lire aussi : We thought Australian cars were using less fuel. What can be done. Vox - Climate Change playlist. TED Ed - The nature of climate change. Before you dive into the rest of this Quest, check out these videos to learn more about human causes of global warming, climate change, and its effects on nature and society: Watch 1: I'm only a kid, what can I about climate change? 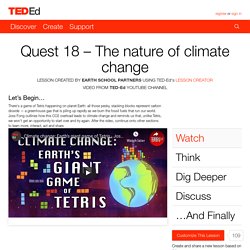 (Global Weirding)Watch 2: Causes and effects of climate change (Nat Geo)Watch 3: How do we adapt to an already changing climate? (GIZ)Watch 4: Can wildlife adapt to climate change? (TED-Ed)LEARN + INTERACT Learn more about climate change from Bill Nye the Science Guy or watch this video from David Attenborough. Read about the importance of the Greenland Ice sheet and try this experiment at home: How Melting Ice Causes Sea Level Rise. Watch this video about climate justice (for all ages). Inspire yourself with this video about nature-based solutions from Greta Thunberg and George Monbiot. Discover how we know the climate is changing.

Explore the past: Talk to your parents, grandparents, older relatives, or neighbors.