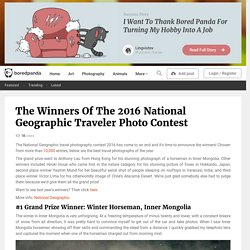 Chosen from more than 10,000 entries, below are the best travel photographs of the year. Le studium et le punctum. German Photographer Documented His 350 Miles Trek On Three Donkeys Around The Most Remote Places In Africa. A journey through the mountainous desert of Ethiopia is a journey through the ancient books of the Bible. 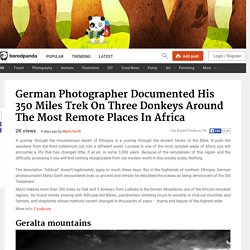 It pulls the wanderer from the third millennium out into a different world. Located in one of the most isolated areas of Africa you will encounter a life that has changed little, if at all, in some 3.000 years. Because of the remoteness of this region and the difficulty accessing it you will find nothing recognizable from our modern world in this society today, Nothing. The description “biblical” doesn’t legitimately apply to much these days. 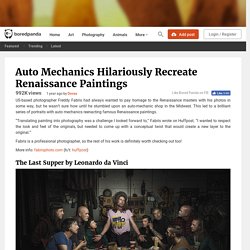 This led to a brilliant series of portraits with auto mechanics reenacting famous Renaissance paintings. Show Full Text “Translating painting into photography was a challenge I looked forward to,” Fabris wrote on Huffpost. “I wanted to respect the look and feel of the originals, but needed to come up with a conceptual twist that would create a new layer to the original.” Single Picture Explains How Aperture, Shutter Speed, and ISO Work In Photography. If you’re a beginner photographer, it can be helpful to have a simple guide that helps you understand the different settings that you can toggle on your DSLR camera. 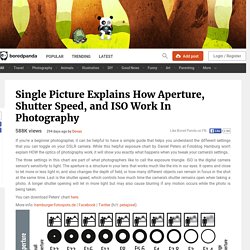 While this helpful exposure chart by Daniel Peters at Fotoblog Hamburg won’t explain HOW the optics of photography work, it will show you exactly what happens when you tweak your camera’s settings. The three settings in this chart are part of what photographers like to call the exposure triangle. ISO is the digital camera sensor’s sensitivity to light. The aperture is a structure in your lens that works much like the iris in our eyes. It opens and close to let more or less light in, and also changes the depth of field, or how many different objects can remain in focus in the shot at the same time. Rocks in the sky: a geological mystery – in pictures. Single Picture Explains How Aperture, Shutter Speed, and ISO Work In Photography. These Are 20 Of The World's Best Photos Taken With Cell Phones. Anyone with a cell phone can be an incredible photographer, no fancy camera necessary. 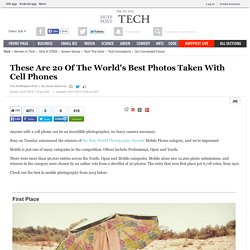 Sony on Tuesday announced the winners of the Sony World Photography Awards' Mobile Phone category, and we're impressed. Mobile is just one of many categories in the competition. Others include Professional, Open and Youth. There were more than 96,000 entries across the Youth, Open and Mobile categories. Mobile alone saw 10,200 photo submissions, and winners in the category were chosen by an online vote from a shortlist of 20 photos. Check out the best in mobile photography from 2015 below: Photographer Takes Portraits Of Babies Seconds After Birth. These photos of newborn infants by photographer Christian Berthelot taken mere seconds after their C-section deliveries may be difficult for some of our readers to look at, but that’s the point. 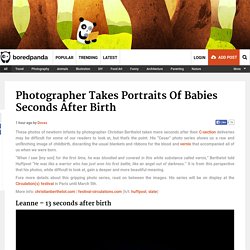 His “Cesar” photo series shows us a raw and unflinching image of childbirth, discarding the usual blankets and ribbons for the blood and vernix that accompanied all of us when we were born. 25 Of The Best Award-Winning Wedding Photos Taken In 2014. Photography contests are great because they tend to attract the best of the best to submit their photos. 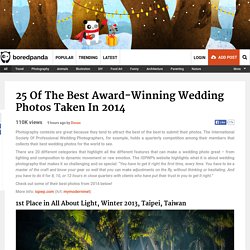 The International Society Of Professional Wedding Photographers, for example, holds a quarterly competition among their members that collects their best wedding photos for the world to see. There are 20 different categories that highlight all the different features that can make a wedding photo great – from lighting and composition to dynamic movement or raw emotion. The ISPWP’s website highlights what it is about wedding photography that makes it so challenging and so special: “You have to get it right the first time, every time. You have to be a master of the craft and know your gear so well that you can make adjustments on the fly, without thinking or hesitating. Help Unravel a Gordon Parks Southern Mystery. Update below. 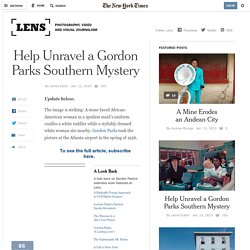 The image is striking: A stone-faced African-American woman in a spotless maid’s uniform cradles a white toddler while a stylishly dressed white woman sits nearby. Gordon Parks took the picture at the Atlanta airport in the spring of 1956. Those few tidbits are the only things certain about this photo. Anything else is conjecture. We don’t know the women’s names, where they’re from, their individual stories or the nature of their relationship beyond employer and employee. We do know it is an unusual, intimate photo of race relations and economic inequality, subjects as freighted today as they were 60 years ago when the civil rights movement was gaining momentum. Photographer Captures Dark And Lonely Roads Around The World. Throughout his travels, Andy Lee has taken a lot of pictures of beautiful and forlorn roads around the world. 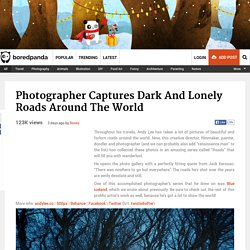 Now, this creative director, filmmaker, painter, doodler and photographer (and we can probably also add “renaissance man” to the list) has collected these photos in an amazing series called “Roads” that will fill you with wanderlust. He opens the photo gallery with a perfectly fitting quote from Jack Kerouac: “There was nowhere to go but everywhere.” The roads he’s shot over the years are eerily desolate and still. 15 Photographs That Will Open Your Eyes To The Wonders Of The World. The Sony World Photography Awards season is well on its way. 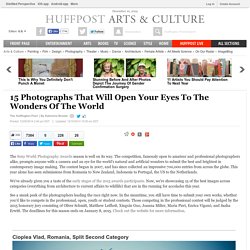 Female Photographer Imagines Her Life with Dozens of Different Partners in 'Self Portraits with Men' Who do you want to be? Or, more accurately, who could you have been? I Was Tired of Pressure to Get Married, So I Started a Mannequin Family  What would drive you to pack a family of mannequins into your station wagon, and take them on a road trip? Enough pressure to conform will send anyone packing.

Dave Engledow, self-proclaimed "World's Best Father" to daughter, Alice Bee, has turned his hilarious photo series into a book, Confessions of the World's Best Father. The project started as a single shot -- Engledow said he was just trying to make fun of himself as a new, sleep-deprived, clueless dad. He was holding a "World's Best Father" mug in that photo, which now appears somewhere in every picture.

When the series first went viral in 2012, Engledow said he was trying to avoid the "Facebook parent" stereotype, and wanted his friends to be interested in watching Alice grow up. Now, the quirky photos have a much larger audience. But most importantly, "This has been a project that’s for Alice. 28 Abandoned Structures Still As Vibrant As The Day They Were Deserted. An empty, foggy diner with the tables still set. An abandoned aquarium, complete with shark paintings on the walls. A desolate church, with architecture still so immaculate, worship could begin tomorrow. How did 23-year-old photographer Johnny Joo find these awesome structures still intact? The idea for his new book, "Empty Spaces," began when he was 16, while exploring an abandoned farm house.