African Americans in the United States 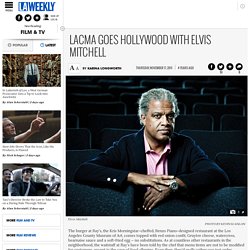 As at countless other restaurants in the neighborhood, the waitstaff at Ray's have been told by the chef that menu items are not to be modified for customers, except in the case of food allergies. Even then, they'd really rather you just order something you're not allergic to. But Elvis Mitchell is new to the neighborhood — he's been living in New York since the turn of the millennium. And at our lunch meeting one sunny afternoon in mid-October, he does not want an egg on his burger. "Are you allergic?

" He is not. This scene is vintage Elvis Mitchell. In 2009, LACMA CEO Michael Govan announced that he was suspending the museum's long-running, highly respected, world- and classic-cinema-heavy film screening program. "No, I did not," Mitchell says. Blood Couple. On a Sunday night late last June, I stepped into the School of Visual Arts Theatre in Manhattan for the world premiere of Spike Lee’s Da Sweet Blood of Jesus with a sense of foreboding. 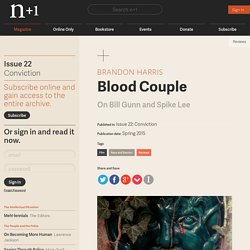 It was in the air of the place, a mild gloom, despite being packed with well-dressed and excited negroes of every shape and size and color, the ebony and the high yellow, most of them notably well-off. For my part, I was less than casket sharp, as they say in parts of the South, but playing the schlubby journalist at festivals is something I’ve grown accustomed to. Soon enough I spotted other members of that schlubby tribe, in T-shirts and poorly fitting jackets, clutching their press tickets. Those pale journalists and a smattering of indie-film folks, lackeys for the small and midsize distributors still interested in a new Spike Lee joint, made up most of the whites in attendance.

In these parts, they seemed exotic. In the ’90s, Lee was too big for festivals. Hess comes to rue his lifestyle. Why Are Black Action Stars So Old? “The big story this year is diversity. 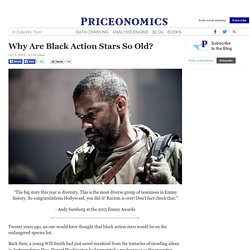 This is the most diverse group of nominees in Emmy history. So congratulations Hollywood, you did it! Racism is over! Don’t fact check that.” - Andy Samberg at the 2015 Emmy Awards Twenty years ago, no one would have thought that black action stars would be on the endangered species list. Back then, a young Will Smith had just saved mankind from the tentacles of invading aliens in Independence Day. “Hollywood's newest leading men," Joy Bennett Kinnon wrote in Ebony’s January 1997 issue, "are increasingly named Morgan, Denzel, Samuel and Wesley, not necessarily Mel, Tom and Sly. " The black stars of the 1990s are still kicking ass onscreen today. But the black action star is aging. Black Love Post-Death — African American Studies Response Series. Post- battle after battle where black women and black femmes lay their bodies on the front lines to try to make a better world. 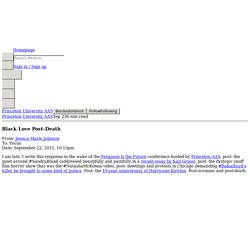 #SayHerName, as a rallying cry around black women whose lives were and are being extinguished by the police, was initiated by Kimberlé Crenshaw and Andrea Ritchie in a brief written for and published by the African American Policy Forum. It extends and deepens a conversation articulated on the ground and in academic work by scholars like Crenshaw and Ritchie, by organizations like Incite: Women, Gender Non-Conforming, and Trans people of Color* Against Violence, and in texts (reissued or in the process of being reissued) like This Bridge Called My Back: Writings by Radical Women of Color and Black Macho and the Myth of the Superwoman.

Earlier in the Response series, Rinaldo wrote: “Anyone who cares to know, knows that three black, queer women coined the term BLM in response to the murder of Trayvon Martin.” We needed this kind of care to live life post-death. Black Speculative Fiction is Protest Work. The post you’re reading is part of Book Riot’s observance of #BlackOutDay. 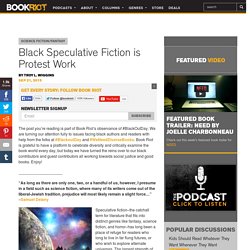 We are turning our attention fully to issues facing black authors and readers with help from the folks at #BlackoutDay and #WeNeedDiverseBooks. Book Riot is grateful to have a platform to celebrate diversity and critically examine the book world every day, but today we have turned the reins over to our black contributors and guest contributors all working towards social justice and good books. Enjoy! “As long as there are only one, two, or a handful of us, however, I presume in a field such as science fiction, where many of its writers come out of the liberal-Jewish tradition, prejudice will most likely remain a slight force…” –Samuel Delany Speculative fiction–the catchall term for literature that fits into distinct genres like fantasy, science fiction, and horror–has long been a place of refuge for readers who long to live in far flung futures, or who wish to explore alternate universes.