The Largest Star in the Universe – Size Comparison. The Map of Physics. 9 best popular science books. With the Juno spacecraft arriving at Jupiter, a piece of amber-enclosed dinosaur tail showing up in a Burmese market, a child being born of three parents and, of course, the unprecedented detection of “ripples” in space-time, the past year has been a fruitful one in scientific achievement and discovery. 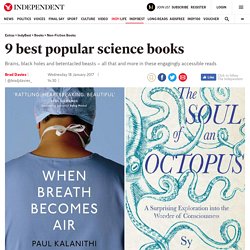 Any of us without the knowhow might be totally lost if it weren’t for the talented writer-scientists who take the time to pen popular science books about their respective fields. Popular science is a protean genre spanning hundreds of topics, and this article tries to reflect that fact – we have books on neuroscience, books on genetics, books that blend neuroscience with memoir, books that blend genetics with memoir, books on the octopus, books on time and books on black holes. These are the best in popular science from the past year – books that will enlighten, entertain, terrify and make you feel bad about how little you remember from school. 1. 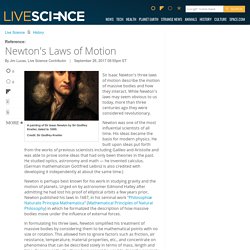 While Newton's laws may seem obvious to us today, more than three centuries ago they were considered revolutionary. Newton was one of the most influential scientists of all time. His ideas became the basis for modern physics. He built upon ideas put forth from the works of previous scientists including Galileo and Aristotle and was able to prove some ideas that had only been theories in the past. He studied optics, astronomy and math — he invented calculus. Newton is perhaps best known for his work in studying gravity and the motion of planets.

In formulating his three laws, Newton simplified his treatment of massive bodies by considering them to be mathematical points with no size or rotation. Newton's laws pertain to the motion of massive bodies in an inertial reference frame, sometimes called a Newtonian reference frame, although Newton himself never described such a reference frame. Newton's second law of motion. Newton's third law of motion (video) The Laws of Thermodynamics. Shock and Awe: The Story of Electricity. Understanding Science: An overview click 2x. To understand what science is, just look around you. What do you see? Perhaps, your hand on the mouse, a computer screen, papers, ballpoint pens, the family cat, the sun shining through the window …. Taking Science to School: Learning and Teaching Science in Grades K-8. Bell, P., and Linn, M.C. (2000). 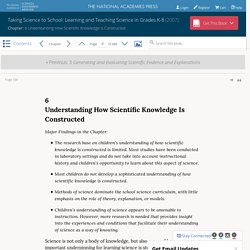 Beliefs about science: How does science instruction contribute? In B.K. Hofer and P.R. Pintrich (Eds.), Personal epistemology: The psychology of beliefs about knowledge and knowing. Mahwah, NJ: Lawrence Erlbaum Associates. Burbules, N.C., and Linn, M.C. (1991). Carey, S., Evans, R., Honda, M., Jay, E., and Unger, C. (1989). Top 10 things everybody should know about science. Second of two parts (Read Part 1) In the opening chapter of his famous Lectures on Physics, Richard Feynman pondered the nature of science, the laws of physics, and the best way to teach it all. 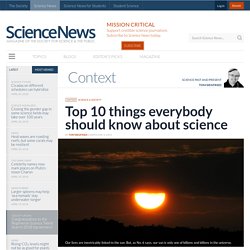 He emphasized that much of the vast accumulation of scientific knowledge could be condensed into some essential principles that allowed all sorts of sophisticated deductions. Suppose some cataclysm destroyed the world’s scientific knowledge, and it was possible to pass only one sentence about it down to future generations. What statement would transmit the most information in the fewest words, Feynman asked. He chose what he called the atomic hypothesis: “All things are made of atoms — little particles that move around in perpetual motion, attracting each other when they are a little distance apart, but repelling upon being squeezed into one another.” Science Knowledge Quiz. Types of knowledge. Although philosophers may differ on how many different types of knowledge there are they agree that with Propositional Knowledge we claim to have knowledge of different things. 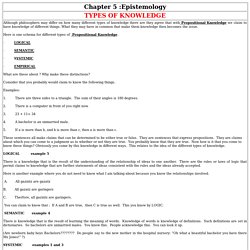 What they may have in common that make them knowledge then becomes the issue. Here is one schema for different types of Propositional Knowledge . What are these about ? Why make these distinctions? Consider that you probably would claim to know the following things. Examples: 1. What Americans know and don't know about science. Why everyone needs to understand science click 2x. Science isn’t important only to scientists or those who profess an interest in it. 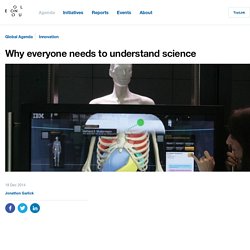 Whether you find fascinating every new discovery reported or you stopped taking science in school as soon as you could, a base level understanding is crucial for modern citizens to ground their engagement in the national conversation about science-related issues. We need to look no further than the Ebola crisis to appreciate the importance of science literacy. A recently elected senator has linked sealing the US-Mexican border with keeping Ebola out of the US, even though the disease is nonexistent in Mexico. Four out of 10 Americans believe there will be a large scale Ebola epidemic here, even though there have been just four cases in the US and only one fatality. Why Science Is Important. As editor in chief and senior vice president, I’ve given talks to a range of audiences about why science is important to humanity’s future wellbeing. 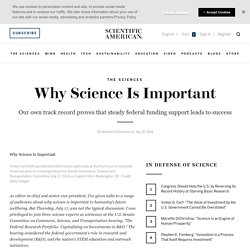 But Thursday, July 17, was not the typical discussion: I was privileged to join three science experts as witnesses at the U.S. Senate Committee on Commerce, Science, and Transportation hearing, “The Federal Research Portfolio: Capitalizing on Investments in R&D.” The hearing considered the federal government’s role in research and development (R&D), and the nation’s STEM education and outreach initiatives. Others in the Capitol hearing room were Vinton G. Basic Research: Understanding The Way Things Work and Why It Matters - Science in the News. By Emily Low figures by Daniel Utter Discovery in science does not follow a straightforward path. 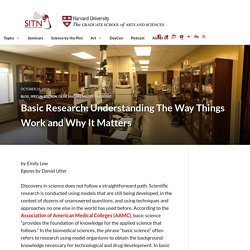 Scientific research is conducted using models that are still being developed, in the context of dozens of unanswered questions, and using techniques and approaches no one else in the world has used before. According to the Association of American Medical Colleges (AAMC), basic science “provides the foundation of knowledge for the applied science that follows.” In the biomedical sciences, the phrase “basic science” often refers to research using model organisms to obtain the background knowledge necessary for technological and drug development.

In basic science, scientists utilize many simple organisms, like fruit flies and worms, because they are easy to study and manipulate, yet share many molecular and biological processes with humans. Newton's first law of motion. Thermodynamics & Heat: Laws of Thermodynamics. A thermodynamic system is one that interacts and exchanges energy with the area around it. 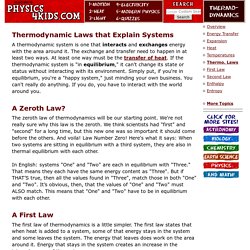 The exchange and transfer need to happen in at least two ways. Termodinamica. Thermodynamics. Thermodynamics is a branch of physics which deals with the energy and work of a system. 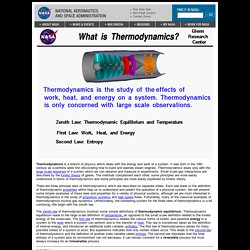 If you have ever read a book by Richard Dawkins, Sam Harris, or Nicholas Carr — among a host of others — you have been in contact, most likely unknowingly, with John Brockman. For Hollywood, there is the parlour game “Six Degrees of Kevin Bacon”: just about every actor or actress is within six connections, normally fewer, of Bacon himself. Emma Watson, for instance, has a Bacon Number of two: she has acted alongside John Cleese, who has in turn acted alongside Bacon. If you were to transpose that game to the world of scientific publishing, you might choose to search out “Brockman Numbers”. The only difficulty would be that Brockman is connected to everybody. Polls don’t identify the real science education problem. First of two parts (read part 2) Several decades ago, in a simpler time, a pollster quizzed members of the general public on their opinion of the Metallic Metals Act. Nearly 15 percent approved it as a federal measure, but 40 percent said that metal laws should be left to the states.

About 30 percent had no opinion. There was, of course, no such act. It was a fiction designed to demonstrate how Americans willingly expressed opinions on things they knew nothing about. In truth, the poll itself may have been fictional — nobody seems to be able to verify that it was really conducted. So it shouldn’t be a shock when people express a wrong opinion on a science topic they know nothing about.