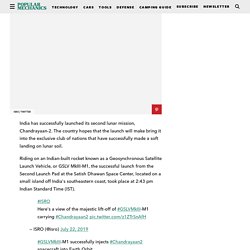 The country hopes that the launch will make bring it into the exclusive club of nations that have successfully made a soft landing on lunar soil. Riding on an Indian-built rocket known as a Geosynchronous Satellite Launch Vehicle, or GSLV MkIII-M1, the successful launch from the Second Launch Pad at the Satish Dhawan Space Center, located on a small island off India's southeastern coast, took place at 2:43 pm Indian Standard Time (IST). "Today is a historical day for Space Science and Technology in India. I am extremely happy to announce that GSLV MkIII-M1 successfully injected Chandrayaan-2 into an orbit of 6000 Km more than the intended orbit and is better," said Dr. Kailasavadivoo Sivan, head of the India Space Research Organization (ISRO), in a press statement. Voyager Journey to the Stars. NASA Will Send a Helicopter to Hunt for Life on Saturn's Biggest Moon. A Failed Soviet Probe Might Reenter Earth's Atmosphere this Year. NASA's Juno spacecraft enters Jupiter's orbit.

Fast Facts The $1.1bn mission will last 20 months Juno has travelled 2.7bn km since its launch in 2011 It's an unmanned solar-powered observatory A key concern are high radiation levels. 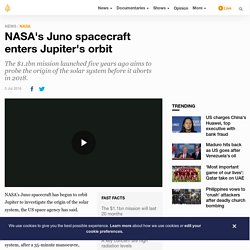 China's Chang'e 4 makes historic first landing on the moon's far side. By Leah Crane For the first time, a spacecraft has landed on the side of the moon that is always facing away from Earth – an area that, until now, we had only seen from orbit. 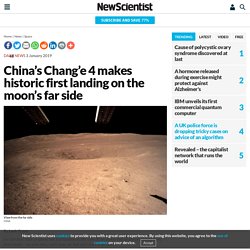 The China National Space Administration’s Chang’e 4 lander launched on 7 December and has spent the past month reaching the correct orbit to attempt the historic landing. China ‘lifts mysterious veil’ by landing probe on far side of the moon. OSIRIS-REx Mission. InSight Is Catching Rays on Mars. BepiColombo. Asteroid Explorer "Hayabusa2" Voyager 1 Is Getting Closer to Earth—Temporarily.

New Horizons Spacecraft Wakes Up to Prepare for Historic Flyby of Distant Object. NASA's New Horizons spacecraft has woken up from hibernation to prepare for a historic New Year's Day flyby at the edge of our solar system. 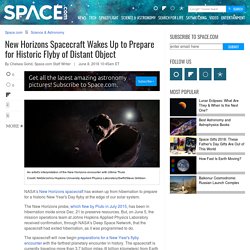 The New Horizons probe, which flew by Pluto in July 2015, has been in hibernation mode since Dec. 21 to preserve resources. But, on June 5, the mission operations team at Johns Hopkins Applied Physics Laboratory received confirmation, through NASA's Deep Space Network, that the spacecraft had exited hibernation, as it was programmed to do. Parker Solar Probe. Watch the Final Moments of the ESA's Rosetta Spacecraft as It Crashes Into a Comet. In Brief After more than 10 years in space, the ESA's "comet chaser" has ended its mission. 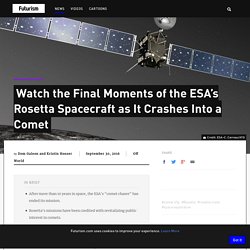 Rosetta's missions have been credited with revitalizing public interest in comets. Bittersweet feeling as Cassini mission embarks on its 'grand finale' ahead of death plunge. It’s the slow beginning of what will be a violent end for the Cassini mission. 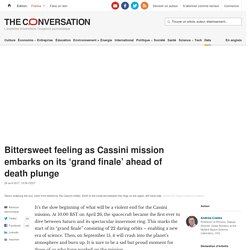 At 10.00 BST on April 26, the spacecraft became the first ever to dive between Saturn and its spectacular innermost ring. This marks the start of its “grand finale” consisting of 22 daring orbits – enabling a new era of science. Then, on September 15, it will crash into the planet’s atmosphere and burn up. It is sure to be a sad but proud moment for those of us who have worked on the mission. Ariel (moon) Ariel is the fourth-largest of the 27 known moons of Uranus. 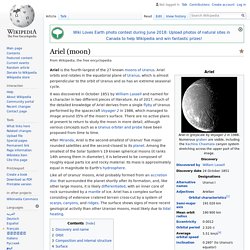 Ariel orbits and rotates in the equatorial plane of Uranus, which is almost perpendicular to the orbit of Uranus and so has an extreme seasonal cycle. It was discovered in October 1851 by William Lassell and named for a character in two different pieces of literature. Pluto Has Dunes, But They're Not Made of Sand. Pluto is an uncanny-valley world, with landscapes and vistas that seem strikingly similar to those of Earth — until you take a closer look. 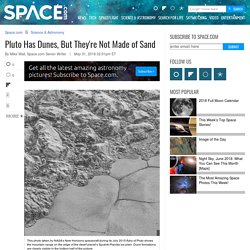 NASA's New Horizons mission, which flew by the dwarf planet in July 2015, found that Pluto has towering mountains, but of water ice rather than rock; vast plains of frozen nitrogen and other exotic materials; and blue skies provided by a wispy atmosphere that contains no appreciable oxygen. And now, a new study reveals another alien parallel: Pluto has an extensive dune system, but the grains that make up the wind-blown mounds are certainly not sand. 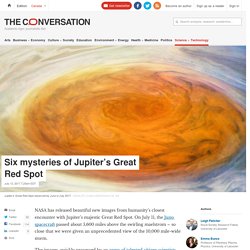 On July 11, the Juno spacecraft passed about 5,600 miles above the swirling maelstrom – so close that we were given an unprecedented view of the 10,000 mile-wide storm. The images, quickly processed by an army of talented citizen scientists, reveal the spiral of red clouds within the spot and the deep red, central “core” where the winds are the calmest. We see incredible details, including networks of fluffy clouds, swirls and eddies casting shadows – even fine waves at the edges of the spot. But despite the fact that the spot is so familiar to most of us, there’s a lot that we still don’t understand about it. These new Juno observations may finally begin to unravel its mysteries. 1. The Great Red Spot is a long-lived, spinning vortex. 2. Voyager Spacecraft 40th Anniversary - Voyager 1 and Voyager 2 Moon Discoveries. Saturn.jpl.nasa. China Outlines Two-Phase Chang'e 4 Moon Lander Mission. Chang’e-4 Moon lander and rover. 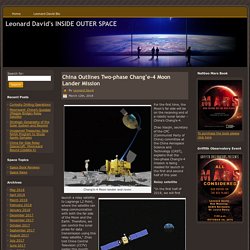 For the first time, the Moon’s far side will be on the receiving end of a robotic lunar lander – China’s Chang’e-4. Zhao Xiaojin, secretary of the CPC (Communist Party of China) committee at the China Aerospace Science and Technology (CAST), explains that the two-phase Chang’e-4 mission is being readied for launch in the first and second half of this year. Earth-Moon L2 relay link.Credit: CNSA Relay satellite. China launches relay satellite to explore Moon's far side. Venus Express. PSLV-C25/Mars Orbiter Mission - ISRO. Why India's Mars mission is so cheap - and thrilling. Image copyright AP India's space programme has succeeded at the first attempt where others have failed - by sending an operational mission to Mars. The Mangalyaan satellite was confirmed to be in orbit shortly after 0800, Indian time. It is, without doubt, a considerable achievement. This is a mission that has been budgeted at 4.5bn rupees ($74m), which, by Western standards, is staggeringly cheap.

Signs of water plumes boost chances of finding life on Jupiter’s moon Europa. Along with Mars, Jupiter’s moon Europa has long captured the imagination of science fiction writers as a potential place for life in the solar system beyond Earth. In science fact, missions have found hints of a subsurface water ocean below the icy crust of the moon. And where there’s warm, liquid water, and the right chemistry, there could indeed be life. Finding out whether this is the case is not going to be easy though. One complicated and expensive solution would be landing on the moon and drilling a hole through the ice to sample the water beneath. But now research has thrown up a better option. InSight - NASA Mars. Carolyn Porco: This is Saturn. Deep Impact Mission to a comet. Voyager Spacecraft 40th Anniversary - Voyager 1 and Voyager 2 Moon Discoveries. TESS - Transiting Exoplanet Survey Satellite. Solar Orbiter. {*style:<a href=' Solar Orbiter - Exploring the Sun–Heliosphere Connection {*style:</a>*} 26 July 2013 The heliosphere represents a uniquely accessible domain of space, where fundamental physical processes common to solar, astrophysical and laboratory plasmas can be studied under conditions impossible to reproduce on Earth and unfeasible to observe from astronomical distances.

Solar Orbiter, the first mission of ESA's Cosmic Vision 2015 - 2025 programme, will address the central question of heliophysics: How does the Sun create and control the heliosphere? In this paper, we present the scientific goals of the mission and provide an overview of the mission implementation. {*style:<br>*} D. Müller, R.G.

BepiColombo. Enceladus Life Finder - Wikipedia. Overview[edit] The Enceladus Life Finder mission was first proposed in 2015 for Discovery Mission 13 funding,[2] and then it was proposed in May 2017 to NASA's New Frontiers program Mission 4.[4][5][6] NASA will select several proposals for additional concept studies by November 2017, select a winner in the competition in 2019, then launch it in 2024.[7][8][9] The ELF mission would search for biosignature and biomolecules in the geysers of Enceladus. The south polar jets loft water, salts and organic molecules dozens of miles over the moon's surface from an underground regional ocean. The theory is that the water is warmed by thermal vents similar to features found deep in Earth's oceans.

ELF's instruments would measure amino acids — the building blocks of proteins — analyze fatty acids, and determine whether methane (CH4) found in the plumes could have been produced by living organisms.[2] Celebrate Voyager Probes' 40th Anniversary with Scientist Stories, Free Posters. On Tuesday (Sept. 5) marks 40 years since the launch of the Voyager probes and the start of one of NASA's most ambitious programs to date, and the agency's Jet Propulsion Laboratory (JPL) wants to share this extraordinary milestone with the public by offering two wonderful online resources.

The Voyager 1 and 2 spacecraft launched two weeks apart, on Aug. 20 and Sept. 5, 1977, on a mission to study the planets and, eventually, the edge of the solar system. Voyager 2 launched first, although the faster-moving Voyager 1 is now farther away from Earth than its sister-probe, and reached interstellar space in 2013. Scientists Push for a Helicopter Drone to Explore Saturn's Moon Titan. NASA is currently working to select its next major deep space exploration mission as part of the New Frontiers program.

ExoMars Trace Gas Orbiter and Schiaparelli Mission (2016) The first mission of the ExoMars programme, scheduled to arrive at Mars in October 2016, consists of a Trace Gas Orbiter plus an Entry, descent and landing Demonstrator Module, known as Schiaparelli. The main objectives of this mission are to search for evidence of methane and other trace atmospheric gases that could be signatures of active biological or geological processes and to test key technologies in preparation for ESA's contribution to subsequent missions to Mars.

The Orbiter and Schiaparelli were launched together on 14 March 2016 on a Proton rocket and are flying to Mars in a composite configuration. Chang’e-3 Lunar Probe. Breakthrough Starshot. The story of humanity is a story of great leaps – out of Africa, across oceans, to the skies and into space. PlanetQuest - The Search for Another Earth. Titan Submarine: Exploring the Depths of Kraken. See the 10 Best Photos Taken by Voyager 2. Moon Express. Voyager Golden Record. Voyager 1 Golden Record (FULL)(5 HOURS)(1080p) New Horizons. 11+ Years of Mars Roving in 8 Minutes. Venera-9 and 10. In 1975, Soviet scientists launched two probes to Venus, which transmitted first ever images from the surface of the planet. Quick Links around this page: Juno.