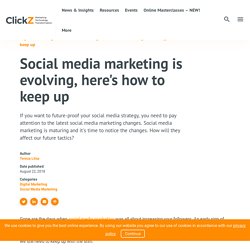 An early sign of success was seeing your followers grow from one day to another. Nowadays, social media marketing has left behind the ages of innocence to go through a more mature phase. This should not be a bad change, but we still need to keep up with the shift. The Dominance of E-commerce and Social Media Marketing in the Global Market. The age of the Internet is here. 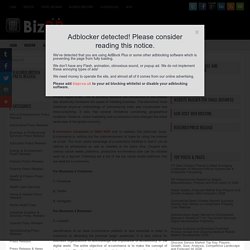 The world now operates and functions on an entirely digital scale. This is primarily because the introduction of the internet has drastically increased the speed of initiating business. The old-school more traditional physical methodology of commencing trade was complicated and time-consuming. It also had several limitations concerning geographical locations. However, online marketing and e-commerce have changed the entire landscape of the global economy.

E-commerce companies in Delhi NCR look to address this particular issue. For Business 2 Customer- 21 Social Media Marketing Statistics You Need to Know in 2018. Since the 2018 version of this post was published, social media has grown to become an even more crucial element of digital communications strategies. 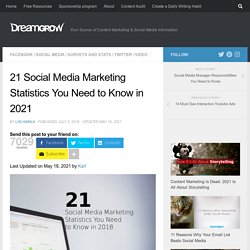 Here, we have updated the stats for 2019 and added even more in order to highlight the social media trends that will influence marketing in 2019. Social media delivers measurable results in sales, leads, and branding. It offers marketers great ROI, enabling them to reach a large audience at a low cost. Social Media's Effect on the Fashion Industry. Updated June 21st, 2018 Social media is gas in the fashion industry’s car. 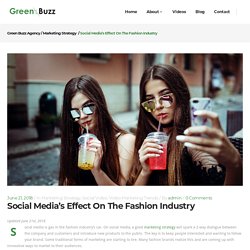 On social media, a good marketing strategy will spark a 2-way dialogue between the company and customers and introduce new products to the public. The key is to keep people interested and wanting to follow your brand. Some traditional forms of marketing are starting to tire. How Social Media Has Changed Fashion. When I was a little girl, I pined over my only portal into the fashion world: the glossy pages of magazines. 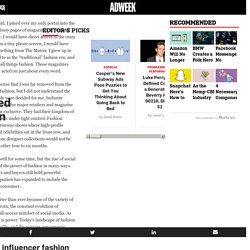 If you had told me that one day, I would have direct access to the crazy world of fashion from a tiny phone screen, I would have brushed it off as something from The Matrix. I grew up in what is now referred to as the “traditional” fashion era, and I was obsessed with all things fashion. Those magazines were my bible, and I acted on just about every word. At the time, I had a sense that I was far removed from the glamorous world of fashion, but I did not understand the extent to which trends were decided for me. Industry gatekeepers—like buyers for major retailers and magazine editors—kept fashion exclusive. How Social Media effects The Fashion Industry. The social media effects on our lives isn’t hidden to anyone. 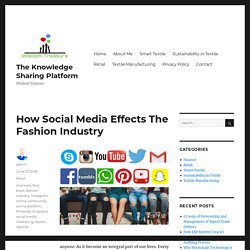 As it become an integral part of our lives. Every one of us has directly or indirectly associated with this platform in his/her daily life. It doesn’t matter whether he/she is connected with Facebook, Twitter or any other professional site like LinkedIn. But, in fact, everyone is empowering her/himself from the huge community of their own choice. How the Fashion Industry Is Embracing Social Media. It’s impossible to deny the power of social media. 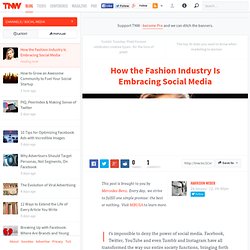 Facebook, Twitter, YouTube and even Tumblr and Instagram have all transformed the way our entire society functions, bringing forth new ways to interact with our family and friends. There’s one industry in particular that’s a natural fit for social media: Fashion. What you wear is inherently meant to be shared, as it’s first and foremost a representation of yourself — one that many like to broadcast out for all their friends to see. How Has Instagram Changed The Fashion Industry. 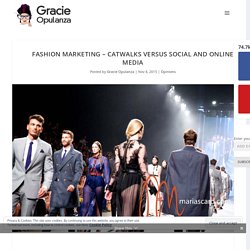 Victoria’s Secret Show accessories can be as much as $2 million. Yes, the Dream Angels Fantasy Bras in December of 2014 did cost that much. Each lingerie design was made by Mouawad jewelers using 16,000 rubies, diamonds and sapphires, all of which were strung together with 18 karat gold. The ornate ensembles took the designers more than 1,380 hours to make. Digital Strategies for Luxury Brands. The rise of social media influencers. More and more followers of fashion appear to be "under the influence" of a new breed of opinion-maker, and big fashion houses are taking note. 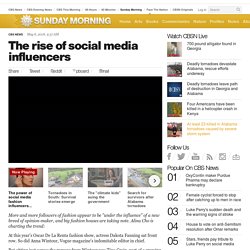 Alina Cho is charting the trend: At this year's Oscar De La Renta fashion show, actress Dakota Fanning sat front row. So did Anna Wintour, Vogue magazine's indomitable editor in chief. How Social Media is Influencing purchase decisions. Though it started out as a platform for individuals to share photos of their friends and family, social media has evolved to become much more impactful, especially for businesses. Social media is now a key component of organizations’ marketing strategies and for good reason. 74% of shoppers make buying decisions based on social media, according to Sprout Social. And this shift isn’t specific to B2C companies. B2B businesses are benefiting from social media’s purchasing influence too. How Streetwear Is Influencing a New Era of Luxury Fashion. Ever since Virgil Abloh, streetwear designer slash Kanye confidante, was appointed artistic director of Louis Vuitton in March, the fashion world can’t seem to stop talking about how the industry is being turned on its head. 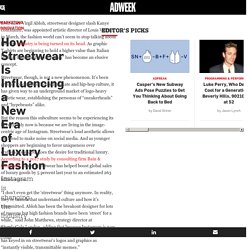 As graphic T-shirts are beginning to hold a higher value than Italian leather, the definition of “luxury” has become an elusive concept. Streetwear, though, is not a new phenomenon. It’s been around for decades. Rooted in skate and hip-hop culture, it has given way to an underground market of logo-heavy athletic wear, establishing the personas of “sneakerheads” and “hypebeasts” alike. How That Giant Straw Jacquemus Hat Won Instagram This Summer. Emma Watson Promotes Sustainable Fashion With New Instagram Account. Emma Watson is making the rounds on a press tour for her forthcoming movie Beauty and the Beast, and taking on a little fashion activism on the way. For the past few years, Watson has adopted sustainable fashion as one of her many causes.

In 2016 Watson told CNN that to her, luxury meant “peace of mind”—in other words, luxury means knowing your clothes came from an ethical source. Now, Watson has taken her fashion activism to Instagram in a new account, @the_press_tour, which documents her Beauty and the Beast press tour, but more importantly promotes the chic sustainable fashion looks she wears along the way. The outfits includes pieces from environmentally and ethically conscious fashion companies like Stella McCartney, Filippa K., Boody, Oscar de la Renta and WORON.

Watson lists every company that contributed to her looks, and how they are sustainable. The account only has four photos up so far, but Watson looks flawless in all of them. Diet Prada: the Instagram account that airs the fashion industry’s dirty laundry. When future historians identify the definitive fashion moments of 2018, they will surely alight on the meteoric rise of Diet Prada. With 489,000 followers – including power players such as Naomi Campbell, Edward Enninful and Gigi Hadid – the Instagram account is on a mission to expose copycat design. Its popularity says more about fashion’s mood than any shoe, silhouette or hemline. Diet Prada’s methods are simple. Photographs of new designs are juxtaposed with images of older, all-too-similar work. Followers are invited to “tsk tsk” along in the comments. Diet Prada Interview.

Tony Liu and Lindsey Schuyler are hard to track down. This comes as no surprise, as the duo behind Diet Prada, the infamous Instagram account that calls out knockoffs and other injustices in the fashion industry, has built a reputation on anonymity. During the two years following the persona’s first post in December 2014, which called out Raf Simons's similar designs to Prada, Liu and Schuyler kept their identities a secret. In October 2017, The Fashion Law outed the pair, but they declined to comment, and continued to go about their routine of “ppl knocking each other off.”

The LOLs kept coming, the followers kept growing (now 542,000 and counting) and what began as an outlet for office banter while working together at milliner Eugenia Kim turned into a responsibility to help instigate change in an industry with a dark underbelly. Miuccia Prada: The Vogue Interview. Diet Prada Sounds Off on 2018's Biggest Fashion Controversies. "I think that every designer in the world is following Diet Prada," the beloved former Lanvin designer Alber Elbaz told me mid-New York Fashion Week in September.

Since Tony Liu and Lindsey Schuyler created the Instagram account four years ago, Diet Prada has transformed into the industry's biggest (and favorite) watchdog, thanks in part to shoutouts from the likes of Naomi Campbell. And yet the fashion establishment still hesitates to fully embrace Diet Prada. When I pressed Elbaz on his support of the account, he cautioned: "I think we’ll have to stop there. " The hesitation is understandable. The Weirdest Trend on Instagram: Virtual Influencers Who Make Real Content. The sun may already be setting on the age of the ambiguously famous social media influencer. Make believe: When social influencers turn virtual. Activists, trendsetters, mommy bloggers, Youtubers, pet influencers, unboxers and Instagrammers.

Everywhere you look on social media there is someone trying to steer your choice for your next purchase - be it a snack, sneakers or a new car. But what if there was the possibility of creating your own ‘virtual influencer’, unique to your brand? Why Being an Influencer Should Be Recognized as a Career Choice. How are jobs created on social media? 3 Reasons to Hire Social Media Agency – Cole Solutions Limited. Social Media Opening New Frontiers For Fashion Industry. Social networks are now well established and growing at a faster pace in the global market. The Limits of Social Media Engagement. 7 Hard Truths About Social Media Marketing.

5 Advantages and Disadvantages Social Media Marketing. Is Instagram Brand Going to Help or Hurt Young Designers. In this story, you will learn: Instagram Brand is a new platform that enables young fashion designers to market their worksThe venue is not safe for up and coming designers since there is no copyright protectionThe program gives a platform for new designers to communicate with their consumers directly.