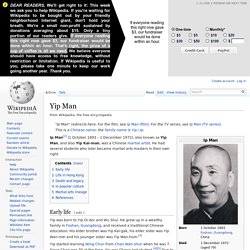 He had several students who later became martial arts masters in their own right. Early life[edit] Yip was born to Yip Oi-dor and Wu Shui. He grew up in a wealthy family in Foshan, Guangdong, and received a traditional Chinese education. Yip Man. Chan Wah-shun. Chan Wah-shun (陳華順) (c. 1836–1909), nicknamed 'Money Changer Wah' (找錢華), was a student of the wing chun grandmaster Leung Jan (梁贊).[1] He is best known today for being the martial arts teacher of Yip Man, himself best known for being the teacher of Bruce Lee. 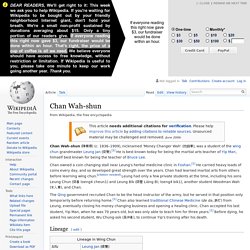 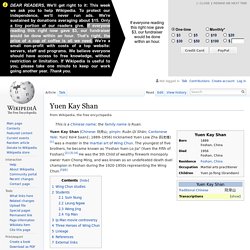 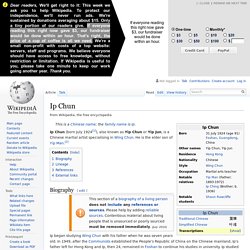 He is the elder son of Yip Man.[2] Biography[edit] Ip began studying Wing Chun with his father when he was seven years old. In 1949, after the Communists established the People's Republic of China on the Chinese mainland, Ip's father left for Hong Kong and Ip, then 24, remained in Foshan to continue his studies in university. Ip studied Chinese history, philosophy, poetry, traditional music, and Buddhism. By 1950, Ip had completed his studies and he chose teaching as a profession. Shaun Rawcliffe. Shaun Rawcliffe (born 1961) is a former professional bodyguard, a British martial artist and ICT security consultant. 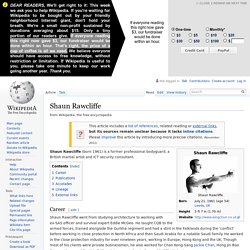 Career[edit] Shaun Rawcliffe went from studying architecture to working with ex-SAS officer and survival expert Eddie McGee. He taught CQB to the armed forces, trained alongside the Gurkha regiment and had a stint in the Falklands during the ‘conflict’ before working in close protection in North Africa and then Saudi Arabia for a notable Saudi family. He worked in the close protection industry for over nineteen years, working in Europe, Hong Kong and the UK. Though most of his clients were private businessmen, he also worked for Chan Kong-Sang Jackie Chan, Hong Jin Bao Sammo Hung and Cynthia Rothrock to name a few in the world of Martial arts. Simply Wing Chun Kung Fu by Shaun Rawcliffe, 9781861265968. Wing Chun is a logical, scientific yet simple Chinese martial art system, which was developed purely for practical and effective self-defence for everybody. 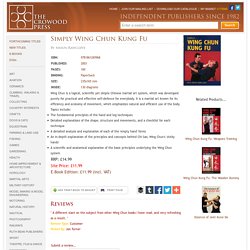 It is a martial art known for its efficiency and economy of movement, which emphasizes natural and efficient use of the body. Topics include: The fundamental principles of the hand and leg techniques Detailed explanations of the shape, structure and movements, and a checklist for each technique A detailed analysis and explanation of each of the 'empty hand' forms An in-depth explanation of the principles and concepts behind Chi Sao, Wing Chun's 'sticky hands' A scientific and anatomical explanation of the basic principles underlying the Wing Chun systemRRP: £14.99Site Price: £11.99E-Book Edition: £11.99 (incl.

VAT) " A different slant on the subject from other Wing Chun books I have read, and very refreshing as a result. "Review Type: Customer Posted By: Jon Turner. Wing Chun Kung Fu: The Wooden Dummy by Shaun Rawcliffe, 9781847970268. Wing Chun Kung Fu has a long history but it has only been taught openly since the 1950s when Grandmaster Yip Man revealed the secrets fo the art and began to teach large numbers of students in Hong Kong. 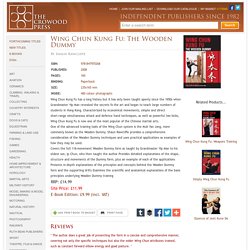 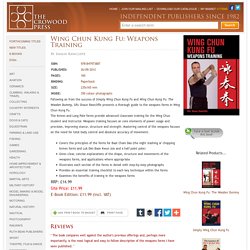 The Knives and Long Pole forms provide advanced classroom training for the Wing Chun student and instructor. Weapons training focuses on core elements of power usage and precision, improving stance, structure and strength. Mastering control of the weapons focuses on the need for total body control and absolute accuracy of movement.